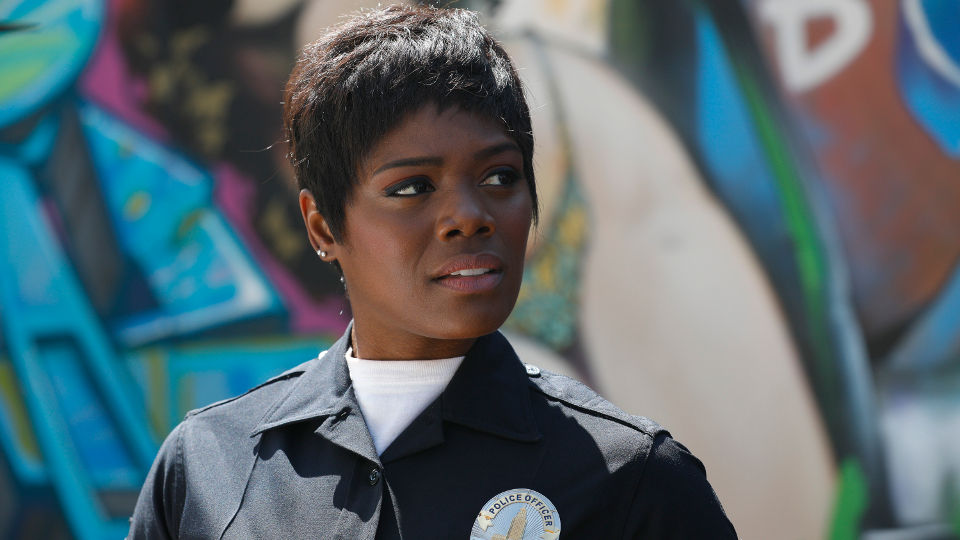 On the fourth episode of The Rookie season 1, the rookies and their Training Officers took part in an annual competition to see who could get the most arrests in a single shift.

The episode opened up with the rookies Nolan (Nathan Fillion), Chen (Melissa O’Neil) and West (Titus Makin Jr.) helping out at a local charity event with Grey (Richard T. Jones) to encourage people to give blood. Nolan and Chen tried to keep things professional despite their break up last episode. He noticed that Chen was chatting to a fireman called Antonio (Mitchell Edwards) and found himself a little jealous.

Nolan noticed that a group of kids he’d been talking to were missing one of their group. They had been having a water pistol fight and said their friend was getting more ammo. Nolan decided to investigate and found the kid face down in a swimming pool. He jumped in and dragged him out then ran with him for help. Antonio sprung into action and save the kid’s life with a CPR mask.

The next day, Nolan was woken up by a noise in his kitchen. He grabbed his pistol and went downstairs but found it was just Ben (Currie Graham), his friend and landlord. They spoke about Nolan’s recent break up with Chen.

At the precinct, Bradford (Eric Winter) announced their annual Roundup competition. The winning team would be the rookie and Training Officer who got the most arrests during their shifts. Grey told everyone that the department didn’t endorse the competition. Bradford told Chen that they had to win no matter what it took. Lopez (Alyssa Diaz) explained the rules to West, that a felony arrest was 7 points and a misdemeanor was 3 points. She said they should go for quality over quantity. Nolan was left disappointed when Bishop (Afton Williamson) said that she chose for them to not participate.

Bradford was so desperate to win that he’d bought a book for dispatch officer, Nell Forester (Sara Rue). He charmed her and got her to agree to send all the high-risk cases direct to him. Lopez and West were first on the board with two arrests.

Nolan and Bishop attended a call where a man was up a scaffolding, spray painting graffiti on a sign. Antonio was also on scene and asked Nolan if Chen was single. The fire brigade were blowing up a large inflatable to cushion the fall of the man if he fell or jumped. Desperate to take part in the competition, Nolan decided to climb the scaffolding and confront the man. He talked him down but the man grabbed him and the fell off together, Lethal Weapon style. Nolan injured his shoulder and felt the wrath of Bishop. He logged himself and Bishop as scoring 7 points.

Lopez and West went to the house of a man named Mr. Walker (Harry Groener) who had gone missing from hospital. He seemed fine but Lopez realised he was lying. West wanted to get back out there but Lopez investigated and found that the man had been stealing drugs to sell.

Nell came through for Bradford as he continued his charm offensive. They tracked down a suspected drunk driver who crashed his car and became impaled on a metal fence. Desperate to continue in the competition, Bishop cut the man free himself and read him his rights before he could get medical attention. Bishop demanded a blood sample from the man before he was taken away for surgery so he could get another 7 points on the board.

Nolan and Bishop attended a noise complaint at the home of a man named Peter Askari (Anthony Azizi). Inside they found the man partying with loud music and two hookers. Nolan also found a gun so they took the man in. His lawyer came in and had him released by providing a permit for the gun. They later discovered he was a banker for the mob.

Bishop and Chen took another call to an armed robbery. They were involved in a gunfight and the culprits locked themselves in the back of an armored truck. Bishop was annoyed and didn’t want to get held up for hours. He ripped the door handle off the truck and filled it with pepper spray which had the desired effect of driving the men out. He logged another 14 points.

West became worried that Bradford and Chen were catching them up. Lopez made him slow down. Nell was going home so Bradford asked her to work 3 hours more until the end of shift. She agreed on condition he took her for a drink and he said he would.

Bishop and Nolan were called to a homeless woman and her child. Nolan gave the boy a blanket to keep him warm. Bishop said they had to escort them outside so Nolan told Bishop he was happy to help them find shelter for the night. They came up empty as all the shelters were full. Bishop explained that the job wasn’t a game and that’s why she wouldn’t do the competition.

Their next call was to an intruder at Peter Askari’s house. The call was then cancelled but Nolan suggested they attend anyway incase there was more to it. Outside they found all was quiet but Bishop and Chen also arrived because of information from Nell. Together both teams investigated and found a woman with her throat slit. Inside they could see Askari and his wife getting a beating.

Both teams began to move inside but Chen slipped and fell, alerting the intruders to their presence. Together the cops managed to catch all the attackers.

Back at the precinct, Chen realised that Bishop and Lopez were trying to let Bradford because of how important it was for him. Chen realised his obsession with winning it was related to when his wife used to work there.

Bradford took Nell for a drink and confessed to her that he was married and that it was complicated. She said she didn’t do complicated and left.

Nolan spoke to Chen to tell her of his jealousy about Antonio. She revealed that she turned Antonio down and they both apologised to each other.

At the end of the episode, Nolan and Ben had a drink together and Nolan realised he’d never had a period of time when he’d been single. Ben thought it would be good for him to try it.

Can’t wait for the next episode? Read our preview of The Rookie episode 6 The Hawke.