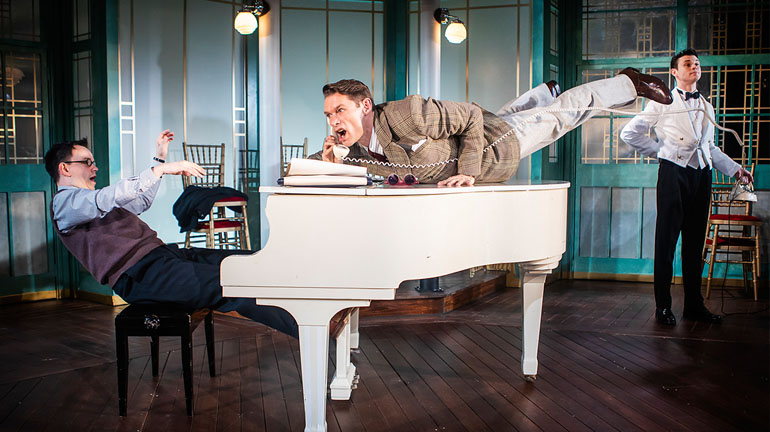 Inspired by The Play at the Castle by Ferenc Molnár, Rough Crossing explores the complexities of scriptwriting and uses its own narrative as a lens to inspect the creative struggles of writing a musical.

Frothing with Thirties’ wisecracks and silent movie slapstick, we experience the anxieties of two writers attempting to find the conclusion to their play, whilst two leading stars cavort loudly in a cabin above. Soon, art imitates life as writer Turai takes the real-life affair as inspiration for his play’s big finale. Needless to say, it’s not all plain sailing…

In terms of performance, Rough Crossing is a genuine showboat of stage talent. West End legend John Partridge (look no further for the ultimate Rum Tum Tugger in Cats) leads as Turai and hands over a tidal wave of charisma, but feels slightly constrained within the role. Broadway’s Charlie Stemp is charged and effusive as steward Dvornichek, but whether the part is actually funny will come down to the audience’s appetite for 90 minutes of traditional pratfalling. Thankfully, Matthew Cottle is much more dialed-down as co-writer Gal, offering some gentle study and depth between the gags.

Ultimately, there’s no escape from the show’s problematic execution. The direction is desperately eager to please and feels overcharged and exaggerated, particularly in the second act which verges on pantomime.

The subtlety of Stoppard’s dialogue is sailed over in exchange for camp bravura which doesn’t quite suit the source material. It’s as if the show can’t find its own tone; almost abandoning its cast to reach out alone — showcasing their great skill — yet clawing home just a handful of laughs. Even André Previn’s musical numbers, performed with some under-amped piano accompaniment, fails to make any big waves.

That said, the production delivers some slick stagecraft from Colin Richmond which is sumptuous in art deco design. There’s an impressive sense of perspective in the set, offering a composite of cruise liner and interior lounge which is nuanced with fine detail and texture. Unfortunately, there’s little attempt to give the location any real movement as if it’s on the water — so again the cast shoulder the burden through performance and you can’t help wonder if a touch more lighting, sound and effects work could have expanded the scope of the show.

Rough Crossing is a fair-weather, mostly competent caper offering some lofty, witty dialogue but it never really sets full sail. A muddled voyage that brings together some outstanding talent but doesn’t capture its author’s intent, this workmanlike comedy tries hard to paddle towards some laughs but ultimately feels all at sea.