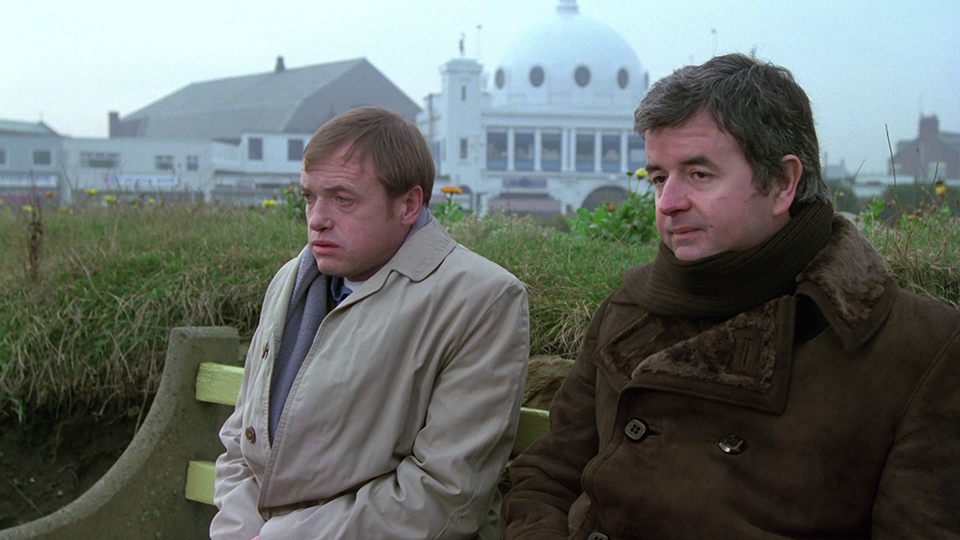 The loveable Geordie duo of Terry and Bob had made for a much-loved situation comedy, The Likely Lads, in the 1960s. It was later resurrected as Whatever Happened to the Likely Lads? in the 1970s, which caught up with the further adventures of the socially-climbing and aspirant Bob Ferris (Rodney Bewes) and his melancholic but mischievous best friend Terry (James Bolam) – but in colour! The Likely Lads, released in 1976, was their big screen outing, which is released not only in colour but in high-definition thanks to restoration work on the original film print.

The film followed on from the events of Whatever Happened to the Likely Lads? which had wrapped up at Christmas 1974. It seemed that the catchy theme song’s lyrics: “Oh, what happened to you? Whatever happened to me?” continued to capture the imagination of the general public. It’s easy to see why. Bob and Terry, with their close friendship despite opposing social situations and views of life, are great company, and their capers are delightfully brought to life by one of the most-revered of comedy-writing duos – Dick Clement and Ian La Frenais.

Time is marching on for The Likely Lads. Bob is now a construction foreman working across multiple sites, married to Thelma (Brigit Forsyth), living a lower-middle class life on the fringes of suburbia. Terry is still single but not short of options, living in high-rise social housing where the lift is permanently out of order. The film acknowledges that they are no longer the cheeky young chaps they had been over a decade earlier when they were first thrust fresh-faced into public consciousness. The opening sequence brings them together as the bulldozers are clearing away the Victorian slums in which they were born, including the public house where they had enjoyed their first pint, and plenty more after that. It’s sentimental, but also laced with fear and uncertainty about what the future holds now that their past is being erased – a familiar concern of those reaching early middle age.

The bulk of the story is taken up with a caravanning weekend in which Bob and Thelma are accompanied by Terry and Christina – his unbelievably beautiful Finnish girlfriend (played by the late Mary Tamm of Doctor Who-fame). Thelma and Terry have never been one another’s biggest fans (he is, after all, the only challenge to her authority through his tendency to lead Bob astray) and the segment falls into the tried and tested comedy staple of a holiday from hell, which leads to Bob feeling sorry for the Roman soldiers who were posted to Northumberland in Hadrian’s time. With the women asleep in the caravan, Bob and Terry decide to up sticks and curtail the holiday, but their unilateral decision-making, needless to say, isn’t consequence-free.

If you like a comedy full of pathos and a touch of wistful nostalgia, The Likely Lads has a lot going for it. There are plenty of comedy tropes including trouserless escapes into the bushes at dead of night, but there’s comfort in the familiarity. As well as feeling like one final flourish for Bob and Terry, The Likely Lads is also a coda to their misadventures – an exploration of the end of an era. It’s impossible for the characters’ legacy not to be tinted by the infamous fallout between Bewes and Bolam that occurred at the time of the film’s release. Despite Bewes’ overtures, the pair never spoke again, and after Bewes’ death in 2017, their differences will remain forever unresolved.

Although it breaks no new ground, and feels like two episodes of a situation comedy stretched out and filmed on a higher budget, The Likely Lads raises enough laughs to endear it to anyone who already enjoys the original sitcoms. Bewes and Bolam are, as always, a joy to watch and effortless in their characterisations. Brigit Forsyth and and Mary Tamm are excellent as their foils, and the questions the film raises – what is the best way to live, and how do we reconcile ourselves to our lot in life? – are examined with great humour. There are also some great lines. “I’d offer you a tin, but I only have six,” Terry tells Bob, supping beer.

Extras on the disc will greatly excite fans of the original series. Two recently-unearthed prints of black and white episodes of The Likely Lads from the 1960s are included on the disc. A Star is Born sees Terry decide he’s going to be the next Bob Dylan and enter a talent contest at the local pub, only to be overshadowed by a cut-price Tom Jones. Far Away Places sees the duo head to the travel agent’s to book a holiday. Bob has his heart set on a bit of sea and sun, but Terry is happy to forego the latter and suggests a week in Bognor. It’s fantastic to see the fresh, funny episodes, half a century after they were made.