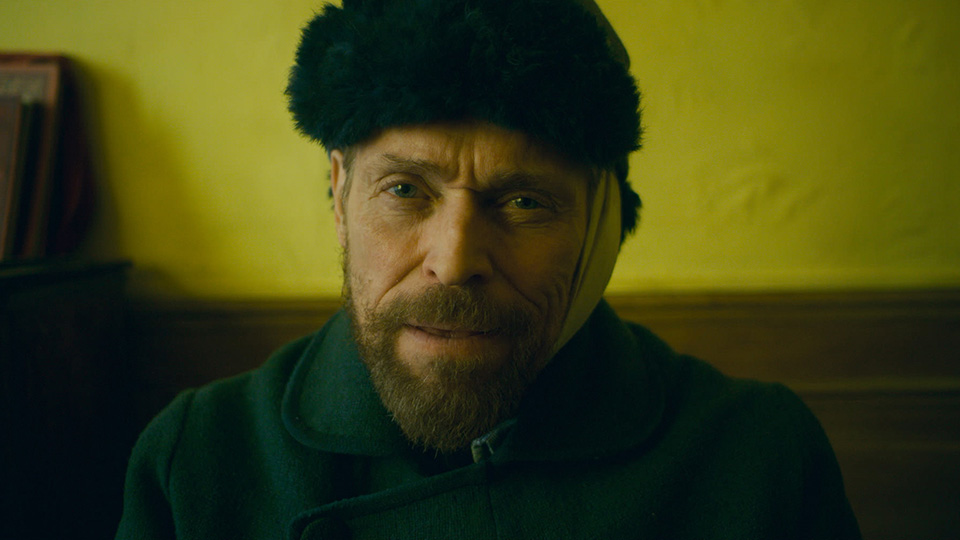 Vincent Van Gogh, arguably the greatest artist of the 19th century, lived a difficult and fraught life, a victim of poverty, his own inner demons and undiagnosed depression. Now celebrated as one of the finest artists to have ever lived, his final years and ultimate spiral towards oblivion are chronicled in Julian Schnabel’s At Eternity’s Gate, a film that, at first glance, presents a realistic, involving and probing examination into Vincent’s life, before dovetailing into the realm of conspiracies.

At Eternity’s Gate plays with the hypothesis of authors Steven Naifeh and Gregory White Smith, who published the biography Van Gogh: The Life in 2011. Within the book, the authors make bold claims regarding Van Gogh’s death, claiming his demise was not due to suicide, but rather an accidental homicide instead. It’s this theory that the filmmakers utilise for the film, which is unique, but equally at odds with everything else contained within the bulk of the film’s story.

The majority of the film goes in hard on exploring Vincent’s innermost turmoil, his inner-monologue detailing his thought process and his debilitating depression. The film’s main story is building towards one ultimate conclusion – Vincent taking his own life – but ultimately changes tact out of nowhere so as to implement the revised ending to Vincent’s life. It’s not for this critic to categorically decide whether the theory holds weight or not, but there’s no denying that the film itself uncomfortably veers from one destination to another with little build-up, resulting in a rather unsatisfying conclusion.

The pace is also an issue – the film is repeatedly dragged along at a snail’s pace, mainly due to long pauses in narrative that merely exist to show off the photography of the locations. These static scenes play out like a slide-show of landscape shots from a holiday travelogue, and only serve to distract from what is an otherwise engaging biopic.

These details aside, Julian Schnabel’s direction is excellent and inventive throughout, employing not just unorthodox shots, camera angles and sound design but also colour and texture itself to explore the characters and develop them accordingly (appropriate considering the film’s subject). The visuals are vivid throughout, imbuing proceedings with a melancholy atmosphere that hangs over proceedings like a dark cloud, whilst the score is equally sublime and wistful. Lifting the film considerably is Willem Dafoe’s beautifully nuanced, piercing performance as Vincent – a quiet, unassuming but powerful portrayal that cuts deep during the film’s more emotionally charged moments.

Were it not for its jarring U-turn towards the climax, At Eternity’s Gate could very well have played as the quintessential telling of Vincent Van Gogh’s life. As it stands, the sudden leaps the film takes at its endpoint softens the big crescendo the story has been building towards, thus losing the emotional payoff in the process.