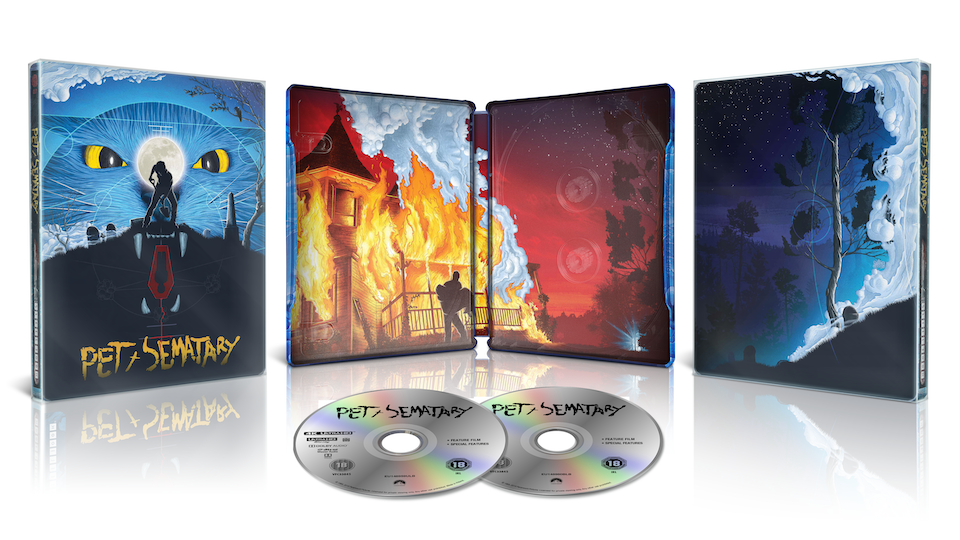 With the excitement building towards next month’s hotly anticipated remake, there is no better time to reacquaint yourself with the original adaptation of Pet Sematary. Released to coincide with the film’s 30th anniversary, it has been given a sparkling restoration, and is available in a terrific new Blu-ray package, a stunning 4K UHD, and if you really want to push the boat out, a beautiful Limited Edition 4K Steelbook.

Based on what is arguably Stephen King’s bleakest novel, an almost unspeakably horrific tale of grief and the darkness we carry in our hearts, Pet Sematary is a classic 80s horror film that has aged incredibly well. As with most Stephen King novels it’s a big old book, and director Mary Lambert does an excellent job – working from King’s own adaptation – of marshalling it onto the screen.

Largely panned by critics when it was first released, it still went onto be a huge box office success. However, Pet Sematary is genuinely one of the best King adaptations from that era, and is quite rightly – in a similar vein to the man himself – undergoing something of a critical renaissance.

The film sees Louis Creed (Dale Midkiff) move his young family from Chicago to rural Maine, where he has taken up a job as the doctor at a University campus. Behind their new house is a path to an old pet cemetary. When his daughter’s cat is hit by a car and killed, Louis is told by his new neighbour (the wonderful Fred Gwynne) to take it up to the cemetary and bury it. The next day, the cat miraculously returns. But it’s not quite the same. When an even greater tragedy befalls Louis, he is drawn back to the cursed burial ground, but something malevolent has awoken there.

It’s a truly horrific premise, and has a few seriously scary moments. There are certain sections where other directors may have ramped up the terror, but Lambert, ever the visual director, sacrifices some of this to build the creeping atmospheric dread, and deliver nightmarish images that will stay with you long after the film has finished.

King’s script does occasionally apply the subtext with a trowel. There are a few moments where it’s a bit like “just in case you aren’t getting the key thematic point of my 500-page novel in this 100-page screenplay, I’m going to make one of the characters repeat some very on the nose dialogue until you get it.”

Lambert’s direction however is stylish and unfussy, conjuring some vivid and haunting visuals. The image of Louis cradling the corpse of his son is filmed in such a matter of fact way, it chills your blood and then breaks your heart. She’s also not afraid to embrace the absurd, and there are a few scenes where the horror does trickle into being faintly ridiculous. This is both a frustration, but also a relief. This is such violently bleak material, I think the film would be unwatchable if it weren’t for the odd moment of humour to undercut the horror.

This new release comes with an excellent selection of special features. There’s a brand-new feature length commentary with director Mary Lambert. We also have a new featurette called Fear and Remembrance, which has been produced to coincide with the release of the new adaptation of Pet Sematary. It features all the main cast and crew of the 2019 version of the film reminiscing about the original film. It’s a cool little piece, and a cheeky little promo for the new film at the same time.

There’s another new featurette – Revisitation, with Mary Lambert discussing the film. She talks about how she got involved in the production, how she had to pitch her idea to Stephen King, and also about overseeing this restoration. The disc also comes with a selection of image galleries introduced by Lambert. These include some never before seen storyboards.

The disc also has a few extra features from the 2006 release of the film. These include Stephen King Territory, a short feature about the author, the story behind the novel, and his role in the production of the film. Most of the contributions here come from King biographer Douglas E. Winter. There’s another short featurette about the characters in the film, and finally a ten-minute making-of documentary.