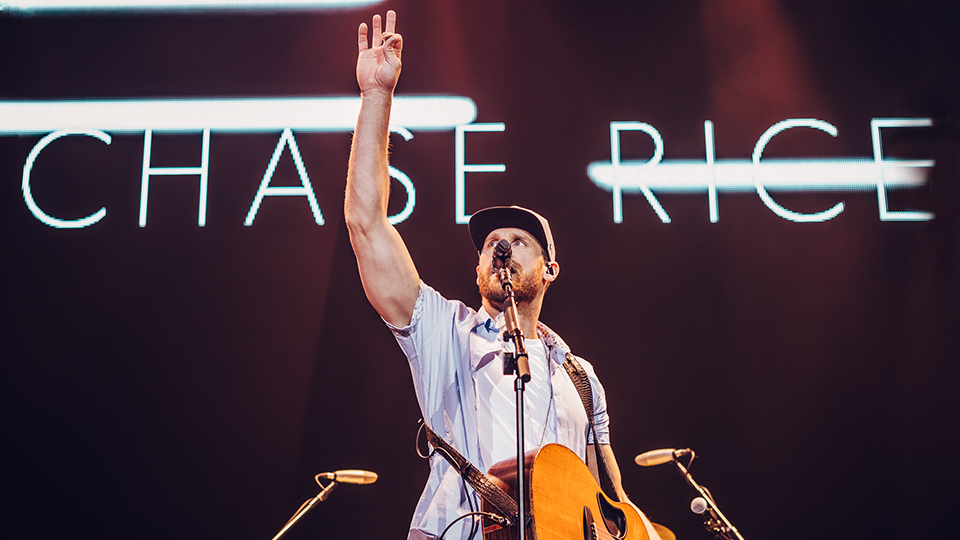 Chase Rice was last in the UK at the end of October 2018 as part of Country Music Week. He played a headline show with support from Lainey Wilson and Jimmie Allen, and he was armed with his trusty acoustic guitar. The show was in support of his latest album Lambs and Lions, which is home to the hits Three Chords and the Truth and Eyes on You. Today Rice made his C2C: Country to Country debut at The O2 Arena in London where he opened up the Main Stage for the first day of the festival.

It’s a difficult task to open up the Main Stage at any festival so Rice had a huge task on his hands tonight. He brought his band to the UK for the first time and opened up with On Tonight, which he started off solo acoustic. After that point the band really kicked in and it brought out the rockier side to Rice’s music, providing a lively atmosphere for the audience who needing warming up. Jack Daniel’s Showed Up came next and Rice worked the stage, free from his guitar.

He cherry picked the livelier songs from his catalogue to perform and for the most part they went down well. Eyes On You, his current single, was one the crowd knew the words to and his performance of Florida Georgia Line’s Cruise, which he co-wrote, was the big sing-a-long moment of the set.

Rice has a good stage presence and his tall stature cuts a charismatic figure but for me the vocals just weren’t on point tonight. It sounded like he was struggling in parts and he was flat a little more than I’d expect from a Main Stage artist. He also had a very cringeworthy moment during Ride where he brought a woman on stage and then told the audience ‘things were going to get sexual’. It wasn’t the right audience for that kind of talk and it went down very muted.

The set came to a close with Ready Set Roll and that ended things on a high note. The audience to be fair were warmed up by the end but I was pretty underwhelmed with the set. I had similar complaints about his acoustic show as part of Country Music Week and unfortunately the backing of a band didn’t help him really deliver tonight.

There’s definitely a place for Chase Rice in Country music but the set he performed tonight wasn’t great. The songs are good and the potential is there but I feel he really needs to concentrate on his vocals. At times he was drowned out by the band and his tuning does need a bit of work. That being said he had good energy and the crowd responded fairly well to him, and the reaction was encouraging when he said he’d be back later in the year.