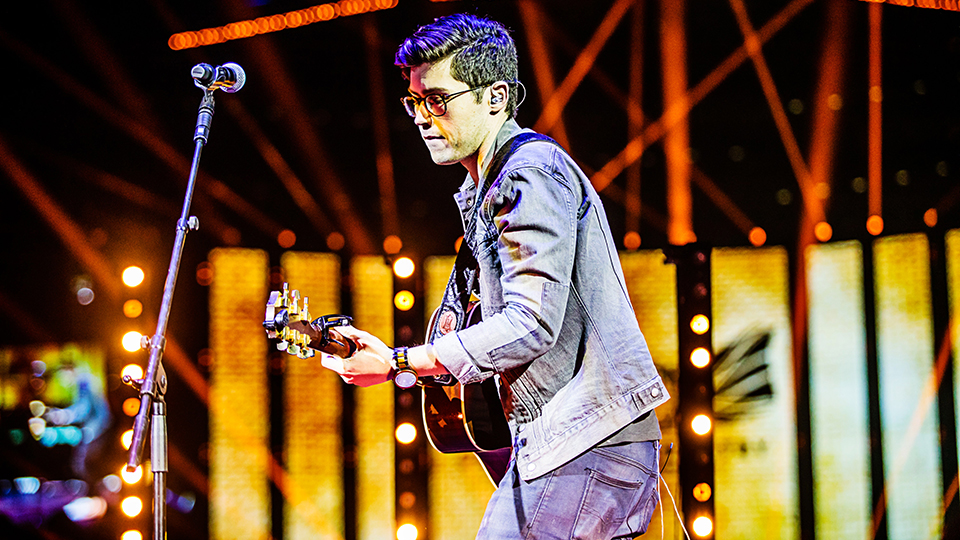 Rising star Adam Hambrick has made the transition from songwriter for other artists to artist himself over the past few months. His debut single Rockin’ All Night Long has been garnering plenty of attention as has his latest track All You, All Night, All Summer. Hambrick has made his first trip over to the UK to perform as part of C2C: Country to Country and today he appeared on the Spotlight Stage inside The O2 Arena.

Hambrick opened the Spotlight Stage at this year’s festival and it was the first time UK Country fans had a chance to see what he was all about. Armed with an acoustic guitar, Hambrick launched into All You, All Night, All Summer, which he mashed up with a bit of Phil Collin’s In the Air Tonight. His vocals were amazing and his distinctive tone really shone during the performance.

His second song was Dan + Shay’s How Not To, a song he co-wrote, and his version gave it a different twist. His voice changed the song into a more traditional Country sound. I really liked his version and the crowd appreciated the fact that it was a song they were familiar with.

For his final song Hambrick sang his breakout hit Rockin’ All Night Long and for me it was the best of the three tracks. He sings it with such passion that it’s hard not to get swept away with him. It’s a strong song and it went down really well with the audience.

Hambrick has a really bright future ahead of him and I think he’s going to be a huge star. He connected with UK fans today and he’s going to be one of the people that fans won’t be able to stop talking about by the end of the weekend. I can’t wait to see him do a longer set during the festival.