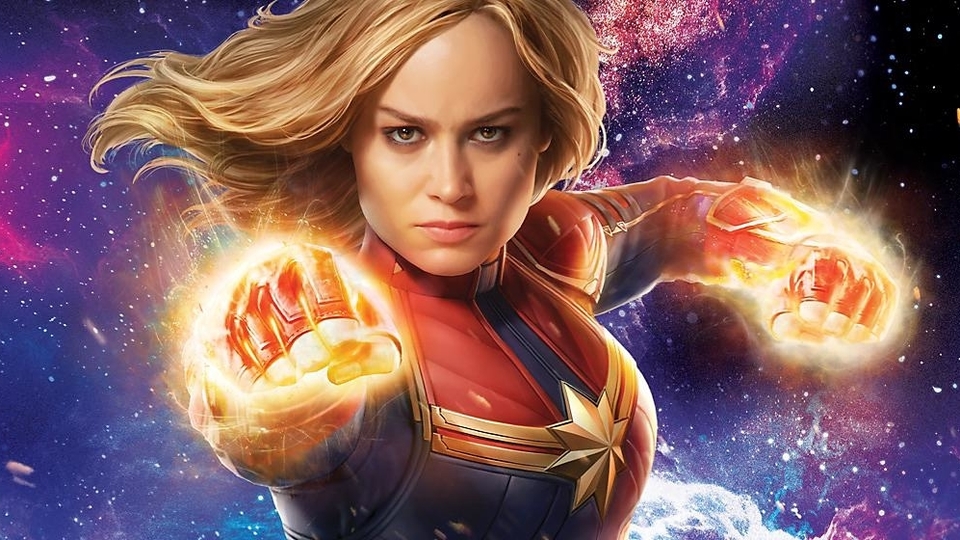 Captain Marvel is out in cinemas now. The newest superstar in Marvel’s Cinematic Universe, Captain Marvel aka Carol Danvers marks the first female-led superhero movie for Marvel Studios, and is a character that will play a huge role in the next Avengers movie Endgame. To mark the movie’s release, there’s plenty of cool new merchandise hitting shelves and online stores around the world.

Check out our review of Captain Marvel

Brie Larson stars as our mighty hero, who must defend the world when two alien races come to war. Aided by a young S.H.I.E.L.D Agent named Nick Fury (Samuel L. Jackson), Carol Danvers springs into action and shows us why she could be considered one of the most powerful Marvel heroes of all time.

To celebrate the release, we thought we’d take a look at the some of the best bits of movie merchandise that’s currently available for Captain Marvel. Gear up with these gems and you’ll be the most powerful fan in the world!

Let’s check out some of the cool merchandise you can buy for Captain Marvel.

Hasbro have put out three Captain Marvel dolls which are fast becoming the must-own item for fans of the movie. The 11.5-inch scale doll includes accessories, rooted hair and 2 superpower-inspired blast accessories! It features 5 points of articulation so kids can put their doll in dynamic poses! There’s a Blue suited version too along with…

This Hasbro doll has a few more accessories compared to the Cosmic version and includes a toy Goose – the loveable cat that steals the movie! It includes full soft goods fashions and a backpack accessory that actually fits Goose the cat inside! The poseable doll features 15 points of articulation too.

Captain Marvel’s the leader of an intergalactic fleet who defends the universe with amazing energy-blasting super powers! Imagine blasting into action with this electronic light-up Photon Power FX Glove from Hasbro, featuring lights and sound FX?! Press the star button to activate effects and imagine blasting down villains too!

Want to get the complete low-down on Marvel’s latest blockbuster? Then grab a copy of this fantastic movie special packed full of incredible photos and stories from the making of the film.

Head down to your local Disney store to nab this rather awesome Captain Marvel Crossbody Bag! The circular design features a moulded Captain Marvel logo and embroidered details, including an adjustable strap, contrasting lining and Zip closure.

Order this from The Disney Store UK

EMP have been a firm favourite for music merchandise over the years but their movie & TV section is fantastic too. They celebrate the latest Marvel movie with a brilliant hooded sweatshirt that takes inspiration from Carol Danvers iconic suit design.

Never one to shy away from a licensing opportunity, Funko are bringing out two Pop! Vinyl’s that are sure to be a massive hit in the Pop! community. The standard version has an unmasked Carol Danvers, but there’s also a really cool suited up chase edition (pictured).

Every kid will be the envy of their friends when they suit up into this impressive costume from Rubie’s. The classic costume includes a jumpsuit with attached shoe covers, a fabric belt and fabric headpiece. It’s available in 3 sizes – small age 3-4, medium age 5-7 and large age 8-10 but as it’s a US made item, best check the measurements before buying.

Hot Toys have always been the market leader when it comes to awesome models and their new Captain Marvel edition is stunning. The highly-detailed collectible figure features two interchangeable head sculpts including a newly develop unmasked head sculpt with amazing likeness and a newly developed helmeted head sculpt with LED light-up function that accentuates Captain Marvel’s superpower, two pieces of classic Mohawk hair sculptures, a newly developed body equipped with LED light-up function on both sides of the forearms, a skillfully tailored costume in metallic red and blue with a gold star emblem on chest, multiple energy-blasting effect accessories that are wearable on arms, and a movie-themed dynamic figure stand for aerial poses! The Deluxe Version will exclusively include Goose the Cat, a delicate Flight Bomber jacket and an extra pair of firing effect accessories to complete the style.

Pre-order this from Zavvi

HerUniverse.com has a wonderful leather jacket in the style of Captain Marvel’s suit. Be quick though – this one is bound to sell out really quickly! They also have a whole host of other Captain Marvel inspired clothing so be sure to check them out (US orders only).

Captain Marvel is released in cinemas on 8th March 2019