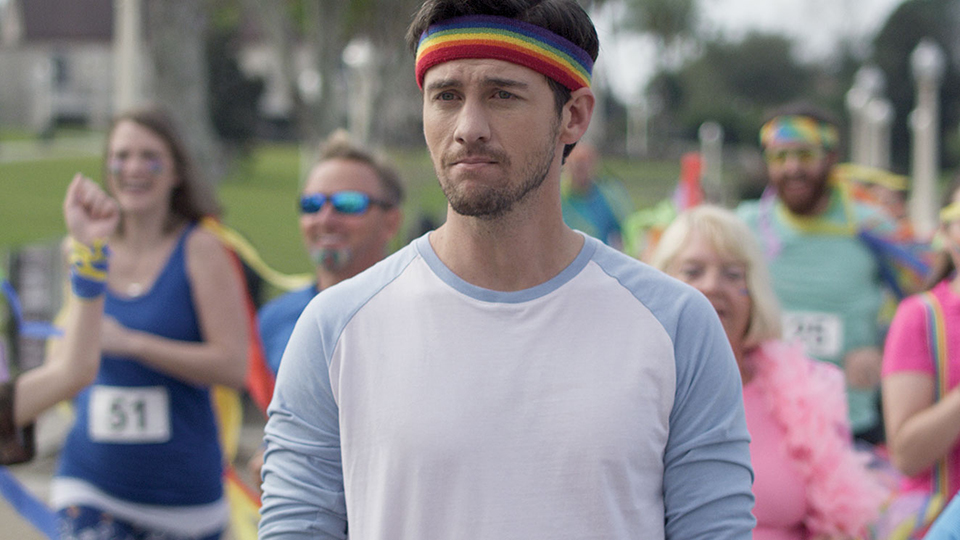 Christian college professor Dave Hopper (Stephen Shane Martin) has the possibility of a full-time job dangled in front of him by his boss Gordon (Tom Nowicki) on the condition that he plants himself in a LGBTQ support group that is blocking the college’s extension plans. Having previously been a counsellor and gone through the upset of his wife leaving him for a woman, Dave agrees. Once he starts attending the group, and meets one of its leaders Alyssa (Danielle Sagona), Dave starts to realise that his perceptions are being challenged and he starts to rethink his anti-gay stance.

The feature film debut of Kevin O’Brien, At the End of the Day is a timely movie that explores the idea of taking time to understand those who are different to you before making a judgement. While you may not agree with Dave’s point of view at the beginning of the film, you can understand why he feels the way he does towards gay people. Having had no experience with any, his only references are the bible and his wife’s adultery with another woman.

That makes Dave’s journey during the film a very interesting one. He’s taken aback that everyone in the group so quickly buys into his lie that he’s gay and things get complicated when he grows close to group leader Alyssa, a straight woman who is an LGBTQ ally. As Dave gets to know each member of the group, and encounters troubled gay teen Nate (Chris Cavalier), his view point starts to change. He forms a strong bond with Nate and it’s the beginning of him questioning all of the beliefs he’s held up until that point.

Dave’s life is further complicated by his free-spirited and vibrant aunt, whom he lives with. Her view of the world is one he’s not entirely sure on but she’s a lot more open than he has been. Their relationship is one of the film’s supporting storylines and there’s a very hilarious scene when Dave takes Alyssa to meet her, while still pretending that he’s gay.

Stephen Shane Martin is really brilliant in the lead role. He is really good at exploring the conflict within Dave and his performance is so convincing that you’re more than happy to go along for the ride with him. He’s matched by Danielle Sagona who gives an emotive performance as Alyssa. She’s the heart of the story and her chemistry with Martin is very strong.

At the End of the Day is an interesting film and one that definitely challenges the beliefs of conservative Christians. Dave’s evolution is a believable one and it really digs into the idea that people are afraid of what they don’t understand. As the pressure builds on him from Gordon to help the college expansion, Dave finds himself at a pivotal crossroads. I won’t spoil the outcome by revealing it here but this film is well worth watching to find out.