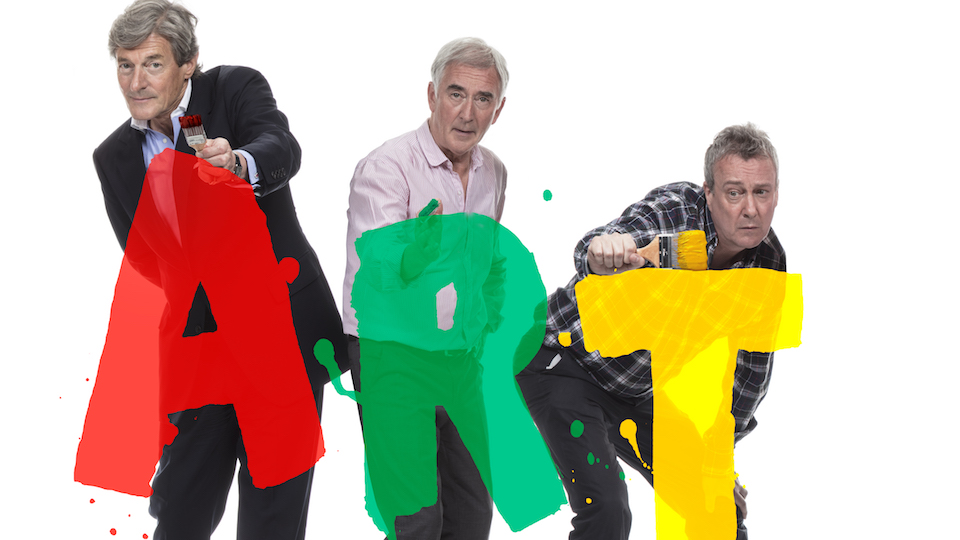 Yasmina Reza’s Olivier, Tony and Moliere award-winning comedy ART, translated by Christopher Hampton, is back! After a hugely successful run at The Old Vic in 2018, the production is on tour. Richmond Theatre welcomed the three old friends Serge (Nigel Havers), Marc (Denis Lawson) and Ivan (Stephen Tompkinson) who find themselves examining their friendship after one pal’s decision to purchase a white painting.

Having seen The League Of Gentlemen’s Mark Gatiss, Steve Pemberton and Reece Shearsmith – a friendship trio in real life – in roles at the close of the long-running West End production (spanning 1996 – 2002), I was doubtful as to whether I’d ever witness performances to beat their collective talent. I was, sadly, correct. Don’t get me wrong, this is a very enjoyable production and if you have yet to see ART then you’ll have no reason to see anything but perfection in the storytelling. However, for me, Nigel Havers played Serge a bit too nicey-nicey. Yes, he’s at times unspeakably smug but some of the killer lines (“Can we try to steer clear of pathos?” and “The way she waves away cigarette smoke”) aren’t delivered with the deliciously acerbic tongue Serge should possess. Meanwhile, Denis Lawson does capture the seething resentment built over a 25-year bond of friendship, and Marc’s outrage that his friend has outgrown him is a delight to watch unravel. The quality isn’t lacking but this ensemble lacks the fizzing chemistry seen in previous incarnations of Serge, Marc and Ivan.

Stephen Tompkinson’s a master at winning over an audience. It strikes me that Tompkinson is the UK’s answer to the USA’s Tom Hanks. Likability as the everyman shines from every performance he gives and – of course, in Ivan, he wins the inevitable applause and admiration for the word-perfect delivery of a lengthy monologue regaling Marc and Serge with the woes of wedding planning. Of course, just as Ivan’s looking for respite amongst the company of dear friends, Serge and Marc’s backbiting comes to a head. Will they be able to start afresh with a blank canvas?

It’s wonderful to see this seemingly timeless play return to the stage and – judging by the audience’s roars of approval – there’s an appetite to see these fictional friends fight out their differences – and similarities – time and time again.