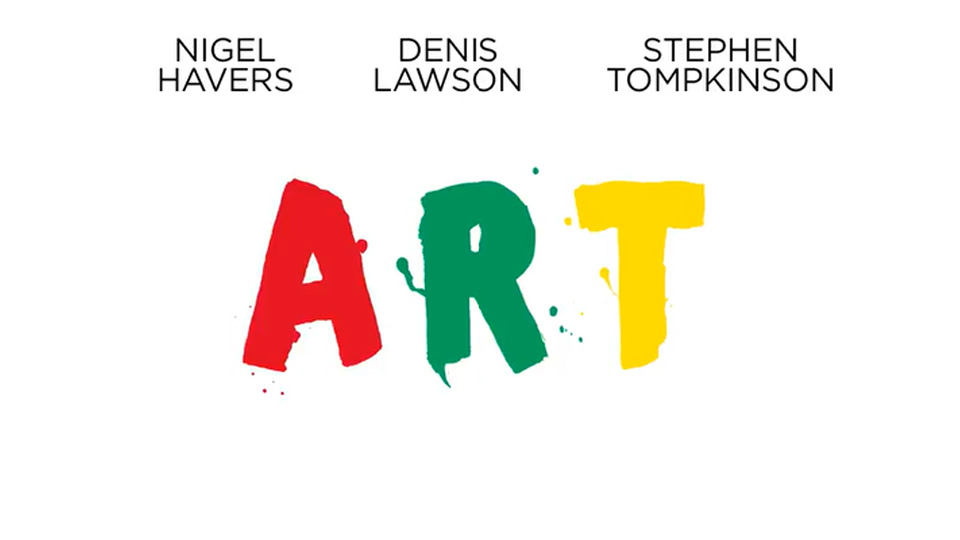 When Serge buys a large whitewashed canvas for £200,000, he’s rather pleased with his contemporary, deconstructed investment. At least until long-term friend and art critic Marc savagely describes it as ‘a piece of white s**t.’ Insecure stationary salesman Yvan attempts to make the peace, but is quickly caught in a crossfire of postmodernist scorn, which explodes into a blazing, irreparable row consuming 25 years of friendship.

Yasmina Reza’s stylish and pointed comedy is an intimate and intellectual satire exploring the value of criticism whilst investigating the question of what really constitutes art. In a battle of subjective views, the play presents a blank canvas to paint a portrait of three complex, insecure egos whose competitive streak has grown darker and more desperate with advancing age.

The characters are self-destructive and beautifully flawed; exposing jealousy, weakness and mean-spiritedness which would be tragic if the subject of a priceless white canvas wasn’t so painfully funny.

Christopher Hampton’s translation from the French original is acute and biting with savage dialogue and rhythmic language, playing on repetition and rhyme.

Comedy timing is superlative and built upon precise backbiting and acidic asides. In a masterstroke of casting, Nigel Havers is swarve yet unpredictably explosive as Serge. Snapping into a rabid fury within milliseconds, Havers secures endless laughs, overturning his trademark composure whilst climaxing in a shambolic – and outrageous – brawl with Mark, played with equal venom by Denis Lawson.

Showcasing a caustic performance with a superb study in intellectual bullying, Lawson excels in portraying a man consumed with critical principles whilst suppressing any shred of kind-heartedness – a tyrannical champion of elitism and snobbery.

Stephen Tompkinson delivers a supercharged performance as Yvan and is arguably the most sympathetic character in the production, made memorable for a show-stopping, frenzied monologue which echoes the anarchic anxiety of Gene Wilder.

The art of this show lies in its brilliant simplicity; Ellie Jones’ direction is full of naturalistic urgency and pace, whilst Mark Thompson’s zen-like production design extends the blank void of the painting to the corners and heights of the stage. There is little to complicate the story; it’s simply three men arguing in a room about a white rectangle, resulting in a sensational collision of comedy and sentiment.

Bright, sophisticated and exhilaratingly fresh, this intensely funny and meticulously crafted production is a picture perfect example of minimalist, contemporary theatre at it’s very best. In short, Art is a priceless, peerless comedy masterwork and a must-see event of the season.