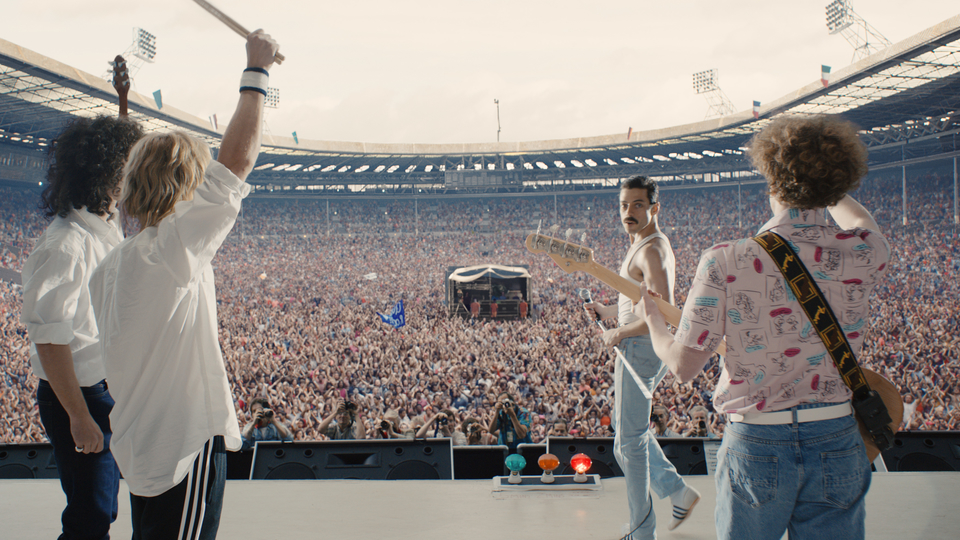 Bohemian Rhapsody is as conventional a rock music biopic as you are ever going to see. One would have thought that the story of a gay man from an Asian background, in 1970s Britain, becoming the most sensational and flamboyant front man for one of the greatest rock bands of all time would make for an interesting film. Well in the case of Bohemian Rhapsody you would be wrong.

It begins with Freddie (Rami Malek) – then going by his birth name Farrokh Bulsara – working as a baggage handler at Heathrow. Before long he meets Brian May (Gwilym Lee) and Roger Taylor (Ben Hardy), becomes the front man for their band, and rock and roll history is made. They are soon meeting with record company execs, going on tours, and writing some of their biggest and greatest hits. A lot of time in Bohemian Rhapsody is spent on watching the band write songs. There’s lots of “hey that’s a cool bass line, play it again” sort of scenes, and then boom, they’re playing Another One Bites the Dust in concert or on Top of the Pops.

But if you’ve come to this film to watch Queen’s Greatest Hits: The Movie, then you will not be disappointed. In fact, you will absolutely love it. And to be clear, there is nothing wrong with this movie giving fans of the band what they want. It just feels like a missed opportunity. Queen were such an interesting and avant-garde band, but the film shares nothing of that experimental DNA. It is just incredibly pedestrian, ticking off one great song after another. But hey, they are great songs.

Sure there’s a few moments of conflict, but it’s been hugely sanitised. Likewise the notorious hedonism of the band. And this is where the film gets problematic. All the noise that accompanied the theatrical release of the film regarding the perceived whitewashing of Mercury’s sexuality has been a bit overblown. The film does address it, but in such a way that veers horribly towards moralistic scorn. It is only Freddie that is shown to have a taste for the partying lifestyle, which anyone with the most basic knowledge of Queen will know is absolute bollocks. Their partying, drinking, drug-use, fucking, and fighting, is kind of legendary.

When the band breaks up (something that never actually happened) and Freddie goes solo, the film depicts this as a period of drunken, gay debauchery, for which he must atone before re-joining the band. It is misjudged to say the least. Which brings us to Freddie’s relationship with his girlfriend Mary Austin (Lucy Boynton). The creative decision to focus so much of the film’s emotional heft on Freddie’s relationship with Mary is a poor one, leaving hardly any space in the running time for his relationship with Jim Hutton.

Also relegated to just a few short scenes is Freddie’s HIV diagnosis. A seismic event in both his own personal life, and the future of the band, it of course has to be in the film. But the decision to bring it forward in time to suit the dramatic requirements of the script leaves a very bad taste.

In regards to performances, Rami Malek dominates the film as Freddie Mercury. The film revolves entirely around him, and no one else in the cast comes close to making a lasting impact. He looks nothing like Mercury, and doesn’t sound much like him either. There aren’t many people in the world who can sing like him, and so all of the musical performances are Malek singing along to playback of the original vocal, which is what we hear in the film.

However, his physical impersonation of Mercury is eerily good. He nails every mannerism of Freddie’s movement, whether strutting on stage in front of a hundred thousand people, or self-consciously covering his overbite with his top lip. It is an astonishing impersonation. But that’s really all it is: an incredible mime performance from a truly gifted mimic.

The blu-ray disc comes with the complete 20-minute Live Aid performance, which the film perfectly recreated. It’s another chance to marvel at Malek’s sensational physical impersonation. There’s also a 15-minute documentary called Becoming Freddie, about the process of Rami Malek getting the role and transforming into Mercury. There’s some interesting input in this from his movement and vocal coaches.

Next up is The Look and Sound of Queen, a 20-minute featurette about how the cast and crew set about capturing the magic of Queen. There’s a moment early on in this when Brian May openly admits that he and Roger Taylor’s involvement was motivated by protecting Freddie’s legacy, which may as well be Exhibit A as to why the film turned out as it did.

The final behind the scenes featurette on the disc is about Recreating Live Aid. While obviously most of it was achieved through special effects, they actually built the stage to scale, and it is very impressive. It even got the Bob Geldof seal of approval. In case you were wondering, the director of Bohemian Rhapsody does not appear in any of these special features.

So for a film plagued with controversy, the final result is a fairly bland offering. But if you love Queen – and the $861 million (and counting) it has taken at the global box office suggests there are quite a few of you who do – then you will adore this film. As a carefully crafted journey through the back catalogue of Queen, Bohemian Rhapsody hits all the right notes. But its over-protectiveness of Freddie, the band, and their enduring legacy is its downfall. Leaving us ultimately with a dishonest and sterile biopic. What a missed opportunity.