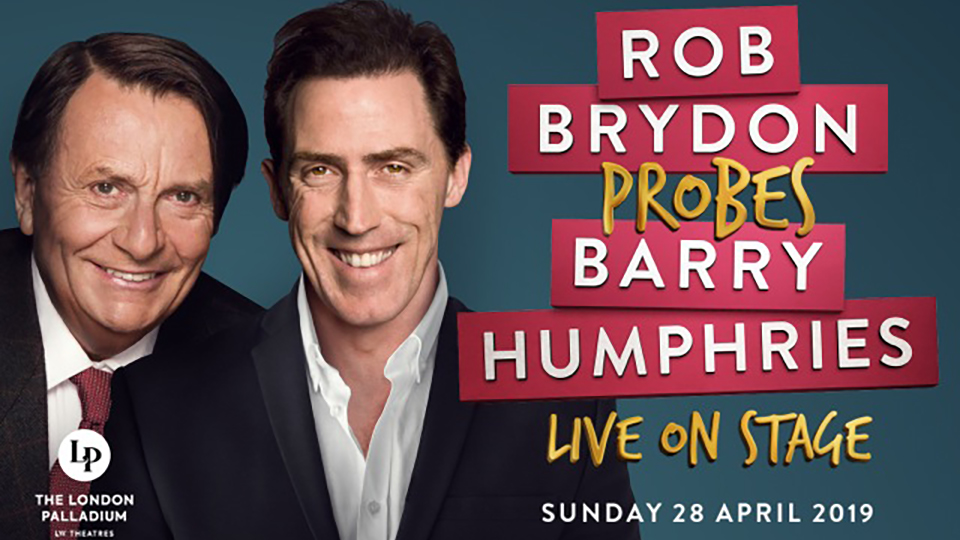 Barry Humphries, best-known for his popular character Dame Edna Everage, will be returning to London in April for a one-off show with Rob Brydon.

Rob Brydon Probes Barry Humphries Live on Stage sees the comedian interviewing Humphries, who is expected to reveal all about his life and career. The event takes place at the London Palladium on 28th April 2019.

Humphries will reveal his Top 10 comedy moments of all-time, which will be shown a huge HD screen. He will also open up in a frank and candid way about his 64-years on stage.

Rob Brydon said, “I’ve admired and been influenced by Barry Humphries for as long as I can remember. I will probe his every nook and cranny, relentlessly.”

Barry Humphries added, “I’m nervous about being probed by Mr Brydon, I consulted his wife. She reassured me by saying that it could be rather entertaining on the odd occasion.”

Chris Daniels, Director of Rob Brydon Probes Barry Humphries Live on Stage, commented, “The London Palladium could not be a more fitting venue for these two titans of the comedy world to come together and appreciate every inch of one another. Though they have their own, unique styles of comedy, Barry has served as a huge source of inspiration for Rob. To see them both under one roof will be unforgettable.”

Tickets for Rob Brydon Probes Barry Humphries Live on Stage on Sunday April 28th at 7.30pm are on sale now at www.lwtheatres.co.uk.