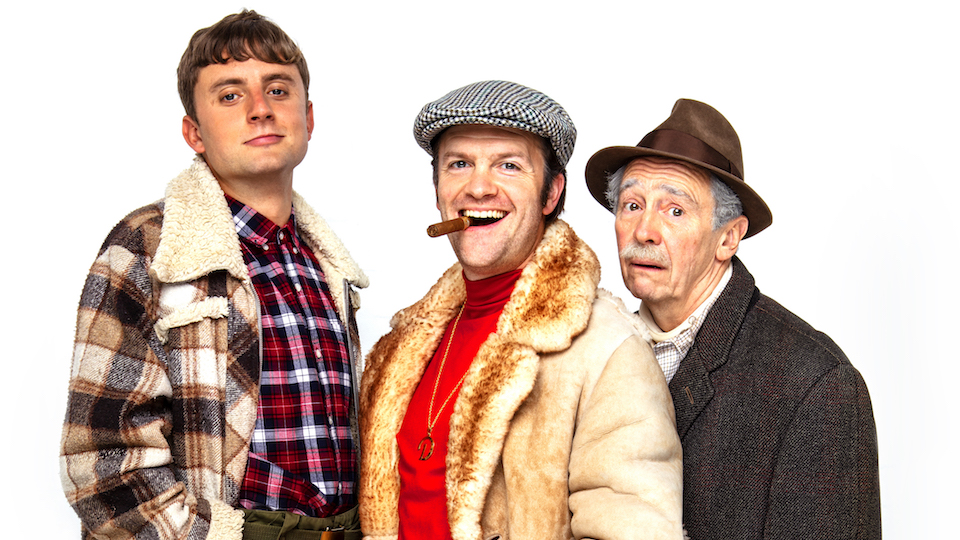 This month, after much anticipation, Del Boy, Rodney and Grandad are headed up West! John Sullivan’s iconic sitcom Only Fools and Horses has been turned into a new West End musical co-written by and starring Paul Whitehouse.

With a script and original score by John’s son, Jim Sullivan, audiences will experience the comedy classic on stage as never seen before.

Ryan, this is your West End debut, isn’t it?

Yes, I’m very excited. Not long now until we open so rehearsals are in full swing. We’re in six days a week so everything’s becoming a bit more second nature. I’ll walk out on the 9th February for the first ever time into the biggest theatre I’ve ever walked into. It’s my first professional job since I graduated which is bizarre!

Congratulations, it’s a big role in that the nation will already have Nicholas Lyndhurst’s interpretation of Rodney / Dave in their minds. How are you approaching it, have you been studying old episodes or are you trying to make Rodney your own?

There’s always a fine line. What Nick and David did and what John Sullivan wrote, what the originals achieved, you can’t go near it. It’s absolutely amazing that’s why it’s lasted for so long and people love it. It seems to be timeless. It’s aged so well. I was a massive fan anyway. I watched a lot of the episodes and I knew what Nicholas Lyndhurst did as Rodney. I didn’t want to do a complete carbon copy of what’s gone before. I feel if the audience came to watch me do an impression for two hours I’d lose them – and I’d not be able to stand it either. So, I’m taking elements of Rodney. John Sullivan’s writing is so good that everything is on the page and we’re taking a lot from the original series anyway but I’m trying to take as much as I can from the script itself. But it’s nice to put the TV show on every now and again and remind yourself of just how good those guys were.

Did you audition for the part?

I got a call from my agent who asked how my singing is. [Laughs] He told me they were putting me forward for Rodney for an Only Fools And Horses musical. I was immediately interested, did some research and saw that it was Jim, John’s son, involved. I instantly just wanted to get into the room and be seen. I had about 5 or 6 recalls, it’s quite a long process. Then I met Tom (Delboy) and they saw how we worked with each other and then Paul was introduced in the mix as Grandad. Then when I found out I’d got it – well it was an absolute milestone moment in my life.

You’re 24 now Ryan, I imagine you watched the show while you were growing up?

Yes, around Christmas time, if we sat down to watch anything together as a family, it’d be Only Fools and Horses. Especially my dad, he was a massive fan. There’s the iconic scenes that you remember growing up like the chandelier smashing. I don’t think there’s anyone in England who’s not watched or at least heard of Only Fools. It’s a real national treasure.

There’s a lot of affection for it. People still want to know what’s happening in the Trotters’ world. How’s it working as a musical, then? Can you give us any spoilers?

We’ve got Paul Whitehouse, Stuart Morley (Musical Supervisor and Arranger) and the late great John Sullivan was already working on the musical before he died. He’d already written a song called This Time Next Year We’ll Be Millionaires. There’s about 20 songs and most of them are original numbers. There’s Holding Back The Years, as well as Love and Marriage…oh and there’s a tadpole song for Boycie and Marlene. They’re all stand alone and really great musical numbers.

Is there a chorus line to go with these big numbers?

There’s numbers that’ll make everyone get up and dance but if you can imagine The Nag’s Head on a Friday night that’s sort of what it all comes out as. It’s all a bit Chas and Dave and, whether it’s Grandad on the piano or Uncle Albert having a singsong, it’s about having a good ol’ knees up.

Have you got any favourite moments from the TV show in particular that you were looking forward to re-enacting?

Do you know what? The scenes in Nelson Mandela House are my favourites. When you think of the family you think of them in that flat with all the gubbins and hooky gear surrounding them, microwaves and TVs. When I read it, taking that aspect of it, and seeing it on the stage as realistic as possible… you feel like you’re in the flat with them. There’ll be recognisable scenes so fans can come along and relate to certain moments – we want to give the fans what they want. We want to show off those lovely moments that people enjoyed.

It probably goes without saying but have you been enjoying working with Paul Whitehouse?

It’s a masterclass being in the room with him – and Tom Bennett too. When you’re in the room with Paul he’s so giving, he’s the most enthusiastic in the room. He’s always thinking about how we can riff and change something. He’s just a lovely, lovely human. I’ve learned a lot from him already. You always hope when you meet people you admire that they’re going to be what you think they’re going to be. Paul is that times ten, he’s an absolute legend.

Have Sir David Jason or Nicholas Lyndhurst been along to see it yet or had any input?

There’s talks that they will be coming at some point, we’re not sure when. I’d love to meet them – I’m a huge fan of theirs. They made it what it is and hopefully they can come and enjoy it.