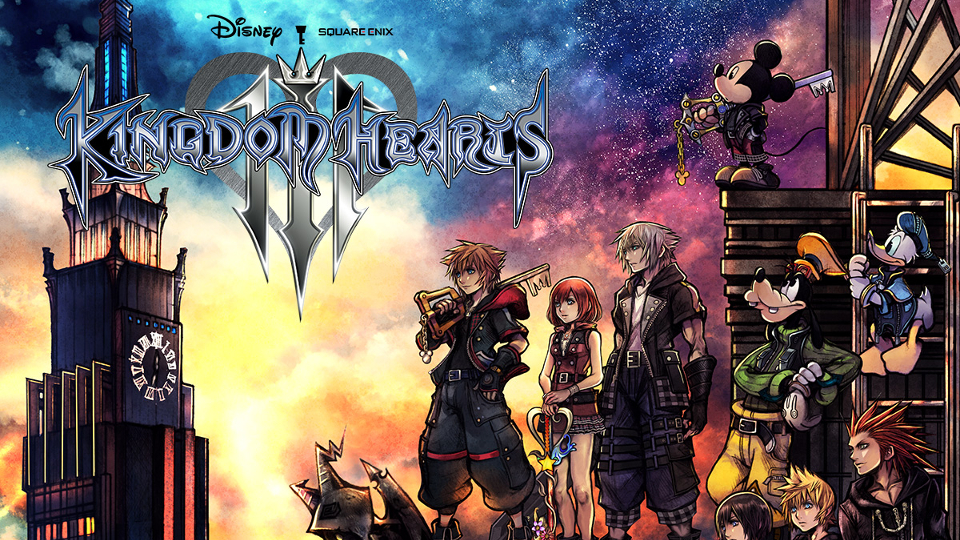 Growing up on both Disney and Final Fantasy, discovering Kingdom Hearts was a treat. With several tie-ins and spin-offs, the series has become somewhat infamous for its impenetrable story. Can Kingdom Hearts III wrap up the story well or it is too far gone?

Kingdom Hearts III begins with our plucky hero Sora, determined to become a Keyblade Master. Due to previous events he’s lost most of his powers and has to travel to various worlds to regain them. The evil Organisation XIII are hot on his heels and are up to no good once more, still trying to build their own Kingdom Hearts. It’d be nice if that was how complex the story got but this is where Kingdom Hearts III falls apart. Getting the positives out of the way first, I really like how they handled the Disney worlds. Most are remixes of their original story but some, like Big Hero 6, are completely new. While these additions are fantastic, it’s sad to see that all Final Fantasy content has been cut out.

OK, please bear with me here as I try to explain the chaos of what went wrong. Keeping this extremely simple, Sora has to stop Organisation XIII from corrupting these Disney worlds. They need 13 members of Darkness to battle the 7 people of Light. Sora also needs to bring 3 people trapped in other bodies or worlds but they aren’t the people trapped within his own body. Xehanort is the big evil but he’s split into Xemnas, Ansem, Young Xehanort and……..OK, I can’t keep doing this. I’m trying to keep it simple but even here you can see where this story has completely collapsed under it’s own weight.

It’s a tale of alternate timelines and universes and characters who have different and identical versions of each-other. It’s nowhere near as interesting or deep as it thinks it is. It’s incredibly basic yet, overly complex. After your final Disney world you are dumped into around 8 hours of this nonsense where characters are constantly spewing the same lines over and over again. Let me take it back, it’s not complex it’s just badly written. It throws the words “Light, “Dark” and “Heart” every 10 seconds and expects you to be invested.

If they had cut out all of the extended universe content and kept it a simple battle between good and evil, it could have been great. It would of given them the time to develop characters that come across as completely bland. It makes me think about Assassin’s Creed, a series that fell too deep into it’s own lore. The writers had the sense to cut out things that were causing problems and refocus, which paid off well. Nomura keeps every single thing in this universe and it’s doesn’t stick together. I cannot recommend this for new players at all and given the fact I was playing with kids watching who said “This is boring”, I can’t even recommend it for kids.

Gameplay-wise, if you’ve played the games before, you know what to expect as very little has changed. For those who haven’t, it’s an action-RPG and a bare bones one at that. The combat is more flashy than it’s ever been and the camera lock-on causes more problems than it’s worth. It’s pretty scrappy and if you want fine controls, you’re going to be disappointed and you better be prepared to be stun-locked into oblivion.

To be fair, it has improved a little, as has general movement, but it’s still leagues behind modern games. This leaves the game feeling like it’s come straight out of 2005, great for giving fans a classic feel but new players will find it very clunky. They still have the D-Pad controlled menu that sits in the bottom left corner, it’s horrific and actually obscures the screen. On the plus side there are plenty of special attacks and summons at your disposal. These make you feel incredibly powerful as you dominate your foes.

Levels are much improved and expanded upon. They even have a little side content and collectibles which invite you to revisit the worlds. Pirates of the Caribbean is the best example of a great level as it offers a little slice of Assassin’s Creed IV: Black Flag. Each level has a good variety of gameplay styles and you won’t expect half of what it throws at you. What you will expect is the terrible Gummi ship levels. They control very poorly and bring the game to a grinding halt. There’s plenty of content here for those who enjoy it but I was angry every time I was forced to play these sections.

The game does look awesome though. The Xbox One X pushes a 1440p resolution and it works very well. The incredible character models look identical to their film counterparts and the cutscenes are perfect representations of classic scenes. The issue with the cutscenes is they pop up during gameplay at awful intervals that stop you from exploring. The use of HDR is excellent, highlighting the fantastic particle effects, though this feature is not currently available on PS4.

Framerate is a bit of a problem here. It’s aiming for 60FPS but it’s all over the place. For the most part it’s playable, though there is horrible frame pacing and screen tearing throughout the game, a 4K 30FPS mode would be much preferred. As with the previous games, the soundtrack is wonderful, making use of a full orchestra. I was very impressed by most of the voice work. While a good portion of characters use their original actors, the ones that don’t have such a strong likeness that it’s hard to tell the difference. Except for whoever voiced Mickey Mouse, that was awful.

View some Kingdom Hearts III screenshots in our gallery:

I’ve waited year and years for this game as I’m a big fan of the series. I watched a 40-minute recap of the story before I played it and was eager to jump in. I had a great time running around the well recreated Disney worlds but when I was thrown into 8 hours of continuous plot dumps I was getting increasingly frustrated by the worst drivel I’ve ever seen.

There are gameplay issues but on the whole it plays fine and has plenty of content to keep you entertained. This series always falls back on it’s story though and it fails to deliver anything meaningful and renders a big portion of the game pointless. I’m honestly not even convinced hardcore fans will be satisfied as there are still plotlines left unresolved by the end of the game. After Capcom did such an excellent job with Resident Evil 2, my nostalgia is currently through the roof but to see Kingdom Hearts III crash and burn, well let’s just say my heart is a little broken right now.