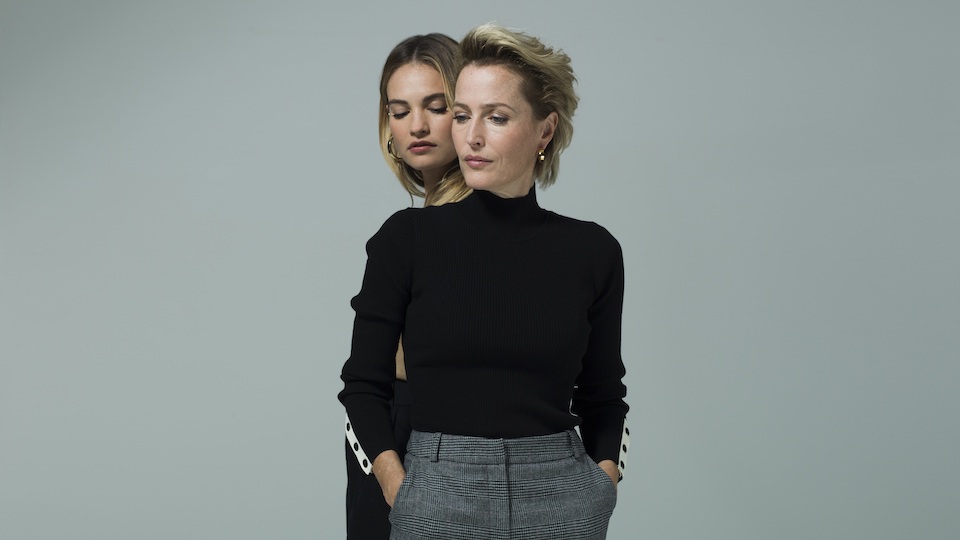 The film All About Eve, made in 1950 and starring the formidable Bette Davis, has to be one of the finest films ever made. Davis stars as ageing and insecure theatre star Margo Channing who is introduced to a besotted fan and schemer Eve Harrington. What ensues is along the lines of Single White Female in dramatic and captivating form.

The current production of All About Eve from director Ivo van Hove comes hot on the heels of rave reviews for his take on Network at the National Theatre which featured a live onstage TV studio and and actual restaurant where audience members could dine while watching the play.

The show starts quite dramatically as the lights are just switched off and the sparse blind is raised. We are introduced to the story of Eve by Stanley Townsend, maleficent as theatre critic Addison DeWitt. We then see Eve (Lily James) beg Margo’s friend Karen (Monica Dolan) for an introduction to Margo (Gillian Anderson) in her dressing room. Margo makes an entitled exit from the stage, throwing her flowers and snatching off her wig. When Karen explains that Eve is desperate to meet her, Margo makes acerbic jibes at frightful stage door hangers-on, calling them juvenile delinquents, before allowing Eve to enter, perhaps to bask in some admiration. It’s here we see the first of many camera tricks on stage, as the dressing room mirror acts as a camera and shows Margo’s face balking at Eve’s story on big screens for the audience to see.

This technical trick may be effective for this scene, and possibly a nod to the effective camerawork in the film with the three way mirrors, but as people come onto the stage behind huge video cameras dressed like Ghostbusters to film the scenes taking place, you become distracted and oddly numb to the action unravelling on stage. Another scene where Karen and her husband Lloyd (Rhashan Stone), playwright and Margo’s muse, have a blazing row in a clinically tiled bathroom backstage that is filmed and projected on screen, makes it seem the action is taking place in Holby City and detracts from the dramatics. Perhaps, this is the director’s intention. You get the sense that there is no privacy in this production and this is a comment on how our Instagram society is diluting real life and making it anodyne. Similarly, an argument between Karen and Eve takes place behind close doors and is filmed and projected onto the screens, diminishing the impact and the purpose of live theatre.

Gillian Anderson is smouldering and splendidly nuanced as Margo, veering effortlessy from insecure and sniping starlet to devastated lover to self-aware martyr. She could perhaps be miscast as an aging starlet, yet I think the premise alluded to here is the perception Margo has about getting older and her precarious relationship with Bill (a fervent Julian Ovenden) and these insecurities have been blasted wide open by the arrival of young landmine Eve. If you were uncertain of this, there is a scene involving a mirror and a pre-filmed scene being projected on screen that will sledgehammer this home.

Lily James is terrific as Eve, playing the innocent fawn one moment and then calculated climber the next, turning on just enough psychosis when required, yet ultimately blind-sided by her own ego and thus devoured by the Harvey Weinstein of the piece, Addison DeWitt. Stanley Townsend injects pure evil into Addison and is really quite terrifying. Monica Dolan is always a delight to watch and you could not wish for a more invested and formidable narrator. Just as we see everything going on behind closed doors and on stage, Sheila Reid is magnificently perceptive as Margo’s mind’s eye and has some hilarious one-liners as her long-suffering aide and confidante.

The production is very faithful to the original text and includes most of the priceless and legendary Margo Channing putdowns. The beautiful and ethereal music from PJ Harvey hums eerily throughout the show which lends to the angst of the piece. And the two new songs performed by the leads are haunting and striking.

Some brilliant performances and a gripping story have ultimately lifted from technical frippery which in some places has detracted from the production. A must-see, but, for some, maybe for the wrong reasons.