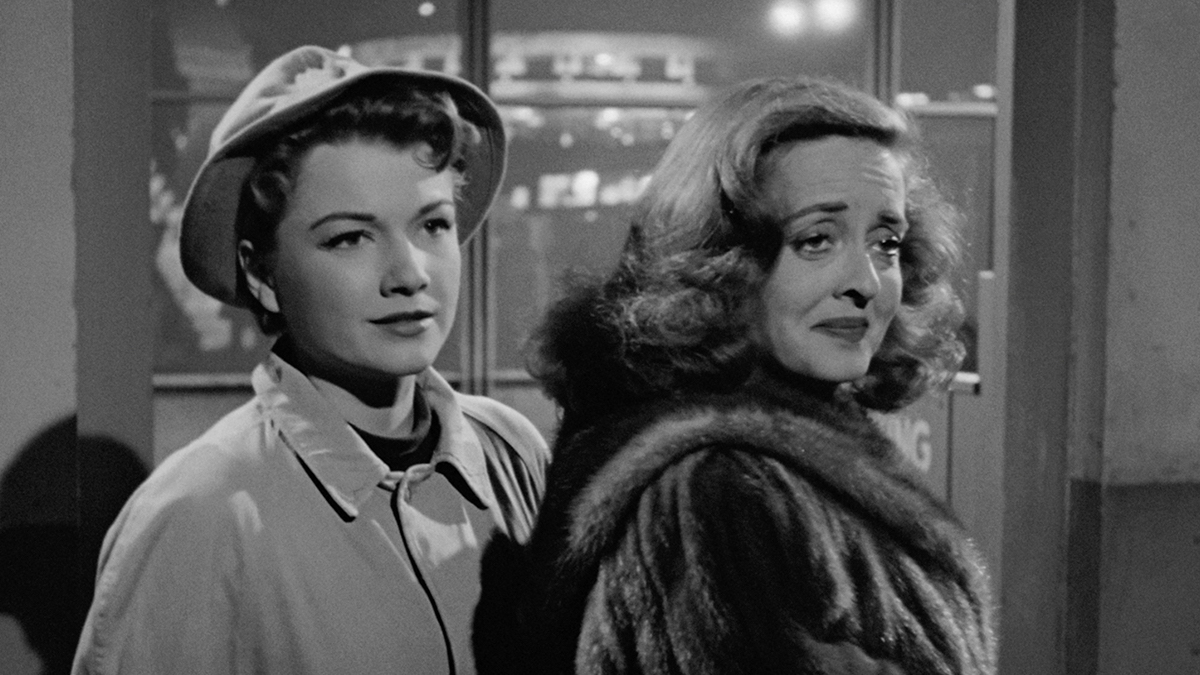 What can one say that hasn’t already been said about ‘All About Eve’? It is quite simply one of the most perfect Hollywood films ever made, featuring two of the most acclaimed performances ever committed to the screen. An extraordinary demystification of showbiz, from an ingeniously structured screenplay, with some of the raspiest and deliciously savage dialogue ever delivered. Joseph L. Mankiewicz’s Academy Award winning classic arrives on the Criterion Collection label this week, and is given a glorious special edition release.

Bette Davis stars as Margo Channing, an esteemed Broadway actress whose vanity betrays her. Approaching 40 (which even now, some 70 years later is still an age which strikes fear in the heart of any Hollywood actress), Margo is concerned about what this will mean for her career. When her friend Karen (Celeste Holm) introduces Margo to Anne Baxter’s Eve—a young and adoring fan who has been at every performance of Margo’s latest play—Margo falls for the flattery and takes Eve under her wing.

The poor young thing with the desperately sad backstory soon ingratiates herself deeper into Margo’s life. First as a fan, then into her inner circle of friends, and then as her personal secretary where she can further manipulate Margo’s life. Before long, Eve has become Margo’s understudy at the theatre. The young ingenue earning rave reviews from the critics, and becoming a rival to Margo in more ways than one.

Davis and Baxter are outstanding in this film. Bette Davis, in a perma-cloud of cigarette smoke, is the quintessential Dame of Broadway. Masking her vulnerability with her defiant and dramatic tendencies. She gets some of the best dialogue ever written for an actress, and delivers it with bells on. Anne Baxter on the other hand does something completely different. She is quiet, cool, and focused. Her eyes a little too wide, betraying her intent. We never see what she is like on stage. The only performance we are privy to is the one she gives every day to achieve her goal.

‘All About Eve’ is still astonishingly relevant. From its depiction of getting older in showbiz, to the ruthless ambition of young stars looking to usurp their idols, it all still rings true. A lot of films of this vintage can look and feel dated, but this one is as fresh and exciting as it ever was. With magnificent supporting turns from the likes of George Sanders and Celeste Holm, as well as a scene stealing cameo from a young Marilyn Monroe, ‘All About Eve’ is one not to be missed.

This superb new blu-ray release comes with two feature length commentaries on disc one. The first, recorded in 2010 features Celeste Holm, director Joseph L. Mankiewicz’s son Christopher, and Kenneth L. Geist, the author of Mankiewicz’s biography. The second commentary is with Sam Staggs, author of “All About ‘All About Eve’: The Bitchiest Film Ever Made!”

Disc two kicks off with a long interview with film costume historian Larry McQueen, discussing the costumes worn by Bette Davis and Anne Baxter in the film, and the stories they tell. This is followed with ‘All About Mankiewicz’, an intimate feature-length documentary from 1983 with film scholar Michel Ciment interviewing Joseph L. Mankiewicz about his life and career.

‘The Secret of Sarah Siddons’ is a short documentary from 2010 exploring how the fictional theatrical society featured in ‘All About Eve’ has since become an actual thing in Chicago. A bit like the fucking Catalina Wine Mixer. Both Celeste Holm and Bette Davis went on to win the award in 1968 and 1973 respectively.

Next up on the disc is the ‘Lux Radio Theatre’ adaptation of the film from 1951, with Davis and Baxter both reprising their roles for this audio only performance. This is followed up by a fantastic short promo clip of Bette Davis being interviewed on the set of the film.

‘Directed by Joseph L. Mankiewicz’ is a documentary from 2010 with the director’s sons Christopher and Thomas, as well as his biographer Kenneth L. Geist discussing the great filmmaker’s career. There’s a second part to this later on the disc called ‘A Personal Journey’.

Next up on the disc is a full episode of the ‘Dick Cavett Show’ from 1980, featuring an interview with actor Gary Merrill about his role in ‘All About Eve’ and his subsequent marriage to Bette Davis. There is also an excerpt from a 1969 episode with Bette Davis.

‘Hollywood Backstories: All About Eve’ is a documentary from 2001, going behind the scenes of the film. It’s a bit of a gossipy programme, but it features archival interviews with Davis and Baxter and a new interview with Celeste Holm.

Finally, we have ‘The Real Eve’, another piece from 2010, this time looking at the real life inspiration for Mary Orr’s short story ‘The Wisdom of Eve’ on which the film is based. This story is included in the booklet that comes with the film as well as an essay by critic Terrence Rafferty.