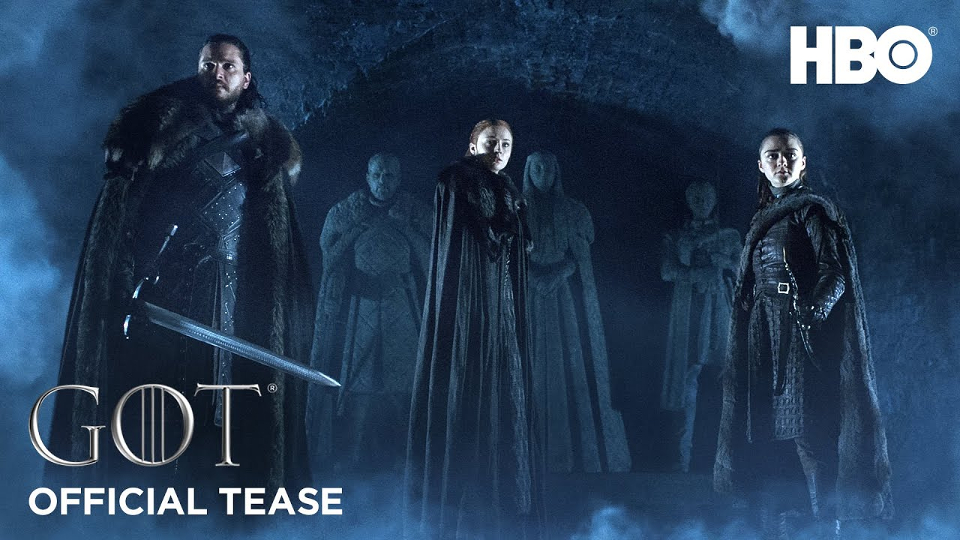 Ahead of the final season of Game of Thrones, HBO have released a brand new teaser trailer called the Crypts of Winterfell. It reveals that the eighth season will begin on April 14th, 2019. (April 15th for the UK)

Watch the Game of Thrones season 8 – Crypts of Winterfell teaser trailer below:

As Jon walks past the statue of Lyanna Stark a snippet of her speaking “You have to protect him” is heard. This is from the Tower of Joy where she appealed to her brother Ned Stark to look after Jon as a baby. Jon still doesn’t yet know that he’s the heir to the Iron Throne as his parents were Lyanna and Rhaegar Targaryen. Surely he’s going to find out soon?

As Jon walks past Lyanna a feather is seen to float to the ground. If you can remember back to the season one pilot you’ll remember that the feather was placed there by King Robert Baratheon. The feather also featured in season five when Sansa returned to Winterfell. She visited Lyanna’s statues and picked up the feather.

Sansa is seen walking past the statue of her mother, Catelyn Stark. She is heard to say “All this horror that has come to my family, it’s all because I couldn’t love a motherless child”. Arya is shown to also be walking through the crypts.

Sky Atlantic have a countdown to the Game of Thrones season 8 premiere:

Jon is then shown pausing at the statue of Ned Stark. A snippet of him is also played, saying “You are a Stark. You might not have my name, but you have my blood”.

The three character eventually meet and look at a group of three new statues. These appear to be statues of Arya, Sansa and Jon. They look confused before a frost creeps into the crypts, extinguishing Jon’s torch.

As they turn, Jon and Arya draw their swords. The frost can be seen approaching, I guess this means that the Night King and his White Walker army have arrived at Winterfell?

HBO also recently released a teaser of their new shows which contained a snippet of new footage. It showed Daenerys Targaryen (Emilia Clarke) and Jon Snow arriving at Winterfell and meeting Sansa:

The final season comprises of just six episodes but we’re hearing they will be feature-length running for 80 minutes or longer.

Game of Thrones will return to UK screen for its eighth and final season on Sky Atlantic on Monday 15th April. The premiere will air at 2am, simulcast with the US.