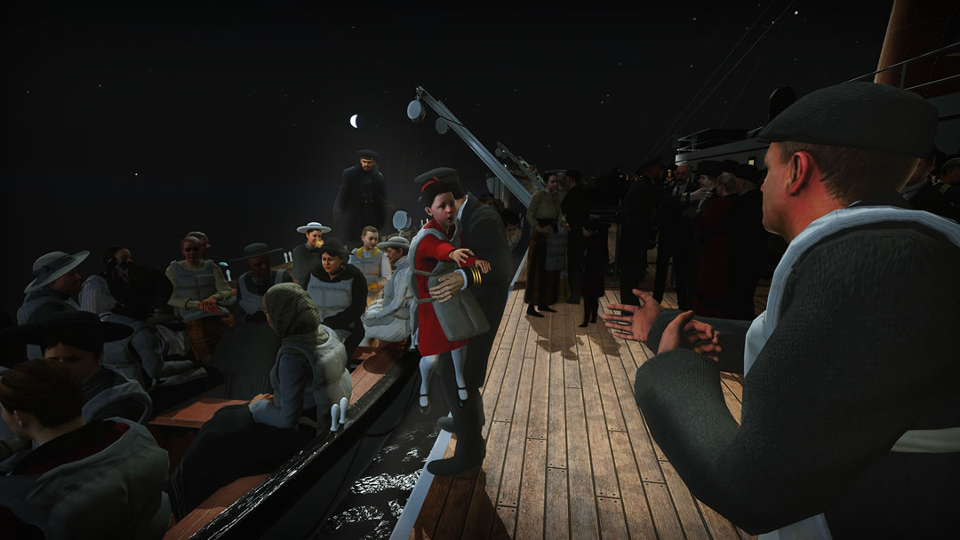 Most people seem to know a thing or two about the historic sinking of the HMS Titanic in 1912. A big part of people’s knowledge is presumably down to James Cameron’s Titanic film from 1997. Following a successful Kickstarter campaign, Immersive VR Education (Apollo 11 VR), have crafted an educational game to help people learn more about the tragedy.

I must stress that this really is an educational experience so don’t focus too much or get excited by the word ‘game’. You’re not going to be running round the ship as Leonardo DiCaprio trying to save Kate Winslet (or vice versa) while Celine Dion belts out ‘My Heart Will Go On’.

Titanic VR was previously available on PC for Oculus Rift, HTC Vive and Windows Mixed Reality. There’s a few different experiences available to teach you more about the ship. The most impactful is one that puts you in the role of a survivor. You get to experience some of the chaos aboard the Titanic after it stuck the iceberg. This experience also gives you a proper sense of scale both of the ship and of the sheer number of passengers – 1,503 would eventually lose their lives.

Looking into the sky you can see the emergency flares light up the sky. As everyone panics around you the crew, confident that the ship is unsinkable, begin to evacuate the women and children into the limited lifeboats. You get to witness the fictional Matthew family desperately trying to stay together before being split up.

As you’re loaded into Lifeboat 6 you can sense the panic around you. Being lowered down to the water is an eerie experience as you look back up to the ship. Eventually your lifeboat manages to row a short distance away and this is when you get to witness the actual sinking.

The developers have done their best to make everything historically accurate thanks to eye-witness testimonies and heaps of research. It’s well done and emotional when you realise you’re seeing an event that actually happened. I must say the short experience did feel a bit too rushed and it would have been good to see at least some of the ship before disaster strikes.

The ‘game’ part of Titanic VR is set some hundred years after the tragedy. It puts you in the shoes of Dr. Ethan Lynch, an Associate Professor of Maritime Archaeology at the fictional University of Nova Scotia. Lynch is assisted by PhD Candidate Jean Robinson. The pair are running a research mission funded by a mysterious investor.

The mission involves diving to the bottom of the North Atlantic to investigate the wreck of RMS Titanic. Diving missions start with you navigating the ocean depths in your mini-submarine. Coming across the shipwreck for the first time is another surprisingly emotional moment.

These missions usually involve getting as close as you can to a certain part of the wreck. You then deploy your ROV (Remotely Operated underwater Vehicle) which is a mini robot that is small enough to enter the wreck safely. Controlling your ROV you must inspect different areas and retrieve items.

View some screenshots from Titanic VR in our gallery:

After completing a mission it’s back to your research lab to take a look at your findings. These sections are very simple and involve moving between different stations to carry out various tasks. For example placing items in different solutions, freeze drying them and even performing simple upgrades on your ROV to allow it to explore further.

During your efforts, Titanic VR presents you with various accounts of what happened on that fateful day. These are opportunities to expand your knowledge further and are rather interesting. Other modes available include a sandbox mode where you’re free to explore as you wish and a Tour mode with short and long tours to get a guided exploration of the shipwreck.

Overall I felt that Titanic VR achieves its aim which is to give players a better understanding of the historic tragedy. There’s a good 6 hours of content to keep you occupied and plenty of information to take in. If you’ve already got an interest in Titanic, just curious to know more or perhaps studying it for a project then Titanic VR should give you what you need.

Titanic VR was reviewed using a digital code supplied by the publisher.