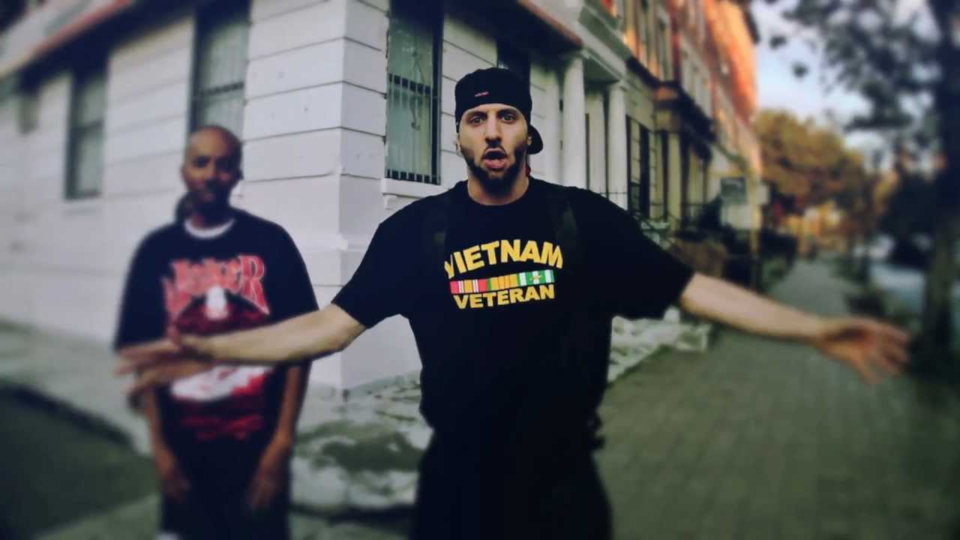 I’m a hip hop head, there is no other way of putting it and I get easily annoyed when people think that what they hear on the radio is all rap music has to offer. It also bugs the hell out me when people presume that rap music is only about guns, crime, how much money the rappers have or the general disrespect of women.

Whilst there are plenty of artists out there who definitely push this agenda, I presume because it appeals to a certain type of listener which equals money in the bank, there are plenty out there who dare to rap about other things. I’ve compiled my own list of artists who’s music has moved or interested me in various ways. It’s far from a definite list of rap artists that I like but I feel that the ones I have included have largely gone unnoticed by the mainstream.

Rapper Blu (definitely not spelt BLUE) and producer Exile met in the mid 2000s and have released 3 albums thus far. My personal favourite has to be ‘Below the Heavens’. Subjects covered in this album include how hard it is to make it in the rap game, trying to pick up girls when you’ve got absolutely zero money and the shock of becoming a father. Lyrically Blu is fantastic and the laid back beats provided by Exile make this a must listen.

Richard Andrew Thorburn, better known as R.A. the Rugged Man has worked with some of biggest names in rap but has never made it into the mainstream. This is possibly because his lyrics are often confrontational and challenge the way we see the world. He is probably most famous for his track Uncommon Valour which is about his father’s experiences during the Vietnam war. His flow is absolutely insane and this is best demonstrated in recent collaboration ‘Freedom Form Flowing’ with Gift of Gab and AFRO.

Styles of Beyond hail from the San Fernando Valley in LA and consist of MCs Ryan Patrick Maginn (Ryu) and Takbir Bashir (Tak), Colton Raisin Fisher (DJ Cheapshot), producer Jason Rabinowitz (Vin Skully),Mike Shinoda (Linkin Park) also features. Whilst these guys don’t necessarily move me lyrically their verses are very tight and don’t stray into the more predictable topics mentioned in the intro. Musically however the album is superb and it’s almost impossible not to bob your head when listening.

Some guys can rap, this guy can RAP and the capitals are deserved. Lyrically he very clever and his flow is off the charts. Gift of Gab collaborated with Del the Funky Homosapien and Brother Ali on the track “Dreamin'” on his solo album, Escape 2 Mars, as well as making tracks with DJ Vadim, Cut Chemist, Ben Harper and Chali 2na of Jurassic 5.

Hilltop Hoods are some of the best home grown talent from Australia. Not that well known in the west five of their albums have reached number one on the Australian record Industry Association record charts. So far they have released seven studio albums and my favourite is still ‘The hard road’ from 2006. What I like about these guys is how they really manage to get into your head with their lyrics and I’m sure that at least one verse from this album will get you right in the feels.

Lizzo is a rapper from Houston, Texas and yes she’s a lady. There are too few female rappers out there and often those that make it tend to be over sexualised and are judged on how they look rather than their talent. Lizzo for me breaks the mold and to say she is a tad bonkers in her style is an understatement. She has achieved some success but hasn’t really broken into the mainstream. She is a strong advocate of promoting body positivity and promotes self love in many forms. She is a great role model for all women out there who want to get into rap music. Her album Lizzobangers is the best placed to start.

Fort Minor was the side project of Linkin park main man Mike Shinoda.  They only released one album ‘The Rising Time’ which is a big shame, in this man’s humble opinion. Styles of Beyond feature heavily on the album which was executively produced by Jay Z. Incredible story telling prevails here over clever flows and topics include the struggles all artists face day to day, an interesting song about how people thought Linkin Park were a manufactured band and most powerful of all the experiences of Japanese people living in the USA shortly after the Pearl Harbour attack.

8. People Under the Stairs

People Under the Stairs are Thes One and Double K and they are both from L.A. They initially set out to make instrumental hip hop music but later made the decision to rap over their own beats. These guys stand out for me musically, their beats have what I can only describe as a dusky feel and their style gives their albums a really laid back feel. I would start with the Fun DMC album.

When I heard the first track on the self titled album STS and RJD2 I was hooked. RJD2’s brilliant beats are complemented perfectly by STS (Sugar Tongue Slim). STS started out as a slam poet and after some pushing from his peers he ended up putting his lyrical skills to music. For a great slice of what modern rap music can offer that is a million miles from what you would hear in the charts anywhere this album is a must listen. If the opening track ‘Doin it right’ doesn’t get your head bobbing then you must be dead inside. If you like the style here you should also check out RJD2’s solo albums (Deadringer springs to mind), they are all rooted in hip hop but many of the tracks are instrumental.

DJ Yoda is one of the best hip hop DJs / producers out there and his back catalogue is incredibly diverse. Some of my favourite albums are his quirky cut and paste series where he blends hip hop with other musical themes such as Country, 80s hits and songs from the 30s. ‘Breakfast of Champions’ is the album I want to mention here though. Released in 2015 it is full of Yoda’s characteristic charm and breaks all of the hip hop molds and features performances from Rex Domino, Mouse Outfit MCs Sparkz and Truthos Mufasa.

So that’s my list complete. Hopefully you’ve found some inspiration from it and have discovered some new artists to add to your playlist. Feel free to let us know your own recommendations via Facebook and Twitter.