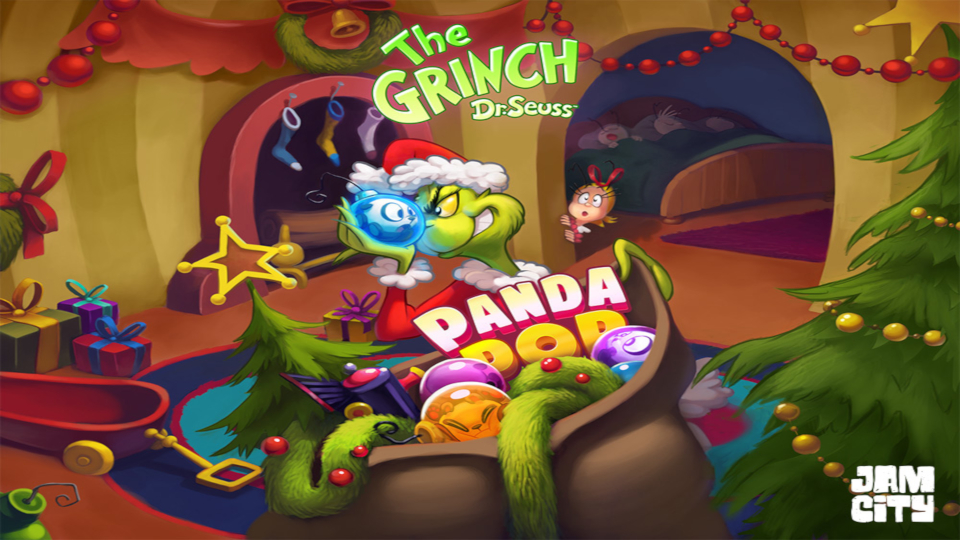 The Grinch has left Who ville and has invaded the dojo yet again. The Grinch will be making his presents (pun intended!) felt this Christmas in Jam City’s Pop Panda. He made his debut in the game last year and this year he’s bringing a sled full of in game events, activities and seasonal fun.

In Panda Pop an evil baboon has kidnapped your panda pups. You play as mama Panda and your aim is to get your pups back by bursting like coloured bubbles. Now mama Panda has to put up with the Grinch trying to ruin Christmas too!

“Last holiday season, Panda Pop audiences adored the debut of The Grinch in their favorite mobile game. From the festive artwork, to Grinch-themed events, players loved seeing an icon of the holidays in the game,” said Vanessa Rouhani, Vice President of Publishing at Jam City. “After last year’s response, we’re thrilled to bring even more of the fun, humor and nostalgia of this beloved character to our millions of Panda Pop players, for this special season.”

“The transformative story of this grouchy, holiday humbug, has been delighting audiences for over 60 years,” said Susan Brandt, President of Dr. Seuss. “By bringing The Grinch to Panda Pop, we’re connecting this classic holiday character with the massive mobile gaming audience, to be enjoyed by players and fans of all ages, all over the world.”

Who-ville Takeover of Panda Pop! [Through January 2nd]
Starting December 6th, key areas of Panda Pop will sport a merry makeover, taking on the festive decor, colors, and characters of Who-ville at Christmas – including a Grinch-style snowman! Visit the winterized Zen Garden to participate in limited time events and festive holiday animations.

Stocking Stuffers [Through January 2nd]
Courtesy of the canine sidekick, Max, earn special Stocking Stuff bonus points as you play. The more you play, the more points you earn from ‘ol Max!

Super Streak [Through January 2nd]
Beat new levels without losing … and win rewards to keep you cruising! Reach new thresholds in your win streak to increase the value of your prize.

Grow Your Rewards Three Sizes (or more!) in Super Streaks! [Through January 2nd)
Beat levels without losing a round, to earn bigger and better rewards, to use in your next round of Grinch-style gaming!

Grinch Rush! [Through December 22nd]
Help Mama Panda beat a set number of levels within a time limit for a massive, holiday reward!

Grinch Raid! [December 14 – 17th; December 21 – 24th; December 31 – January 2nd]
The Grinch is loose in Who-ville! In this special, co-operative event, thwart the delightfully dour Grinch, as he tries to abscond with all the presents and decorations in Who-ville – even the roast beast!  Collect snowballs to throw at the Grinch while he tries to escape with the goodies!

Daily Grinch Gifts [December 19 – 25th]
Log in daily for an advent calendar style countdown to Christmas! Players are treated to a special gift (don’t tell The Grinch!) each day they play.

Panda Pop is available now from the App Store and Google Play.