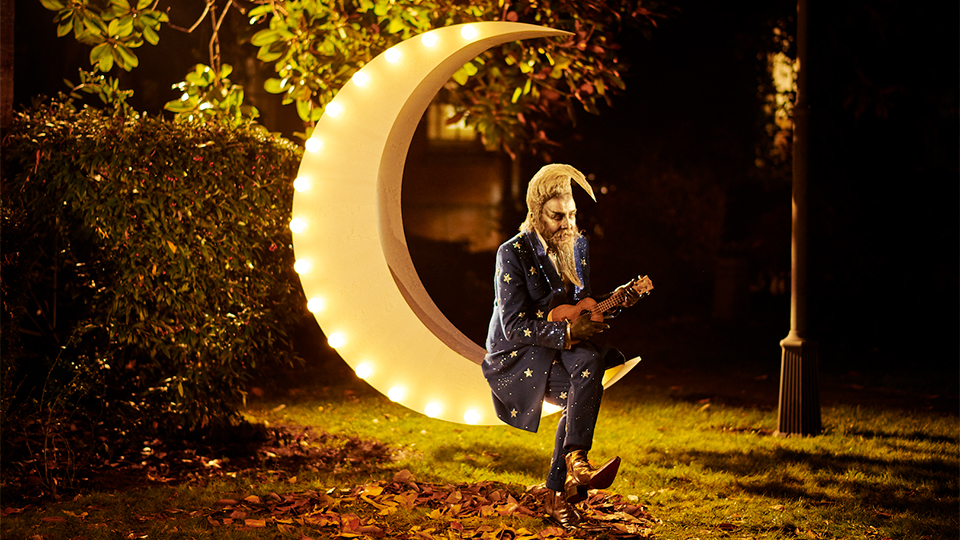 A first-look image has been released for The Show, a new film based on an original story by graphic novel creator Alan Moore (Watchmen, V for Vendetta, From Hell).

Production on the film is currently underway in Northampton, UK. The cast is led by Tom Burke (War and Peace, The Souvenir, Only God Forgives) and includes a line-up featuring Siobhan Hewlett (Show Pieces), Ellie Bamber (Nocturnal Animals, The Nutcracker And The Four Realms), Sheila Atim (Girl From The North Country), Richard Dillane (The White Princess, The Last Post) and Alan Moore himself.

A frighteningly focussed man of many talents, passports and identities arrives at England’s broken heart, a haunted midlands town that has collapsed to a black hole of dreams, only to find that that this new territory is as at least as strange and dangerous as he is. Attempting to locate a certain person and a certain artefact for his insistent client, he finds himself sinking in a quicksand twilight world of dead Lotharios, comatose sleeping beauties, Voodoo gangsters, masked adventurers, unlikely 1930s private eyes and violent chiaroscuro women… and this is Northampton when it’s still awake.

Once the town closes its eyes there is another world entirely going on beneath the twitching lids, a world of glittering and sinister delirium much worse than any social or economic devastation. Welcome to the British nightmare, with its gorgeous flesh, its tinsel and its luminous light-entertainment monsters; its hallucinatory austerity. Welcome to The Show.

Outlining his vision for the project, Alan Moore said, “With The Show, I wanted to apply the storytelling ability accumulated during the rest of my varied career to the medium of film. I wanted to see if it was possible to create an immersive and addictive world with no throwaway dialogue and no throwaway characters, a world where every character is memorable, distinctive and attempting to steal the whole show for themselves, just as we do in real life. I wanted to take some very old-school approaches to film and to find out, alongside Mitch Jenkins, what would happen if you connected them up with some very modern ideas and technical capabilities, and I wanted to make a piece of radical and progressive cinema that was also ridiculously sumptuous, involving and entertaining: a genuinely spectacular show.”

The Show is directed by Mitch Jenkins from a script by Alan Moore. Jim Mooney & Mike Elliott of EMU Films and Lex Films’ Tom Brown are producing. Finance is provided by BFI, awarding funds from The National Lottery, along with Lipsync. Protaganist Pictures will handle worldwide sales.

In this article:The Show, Tom Burke