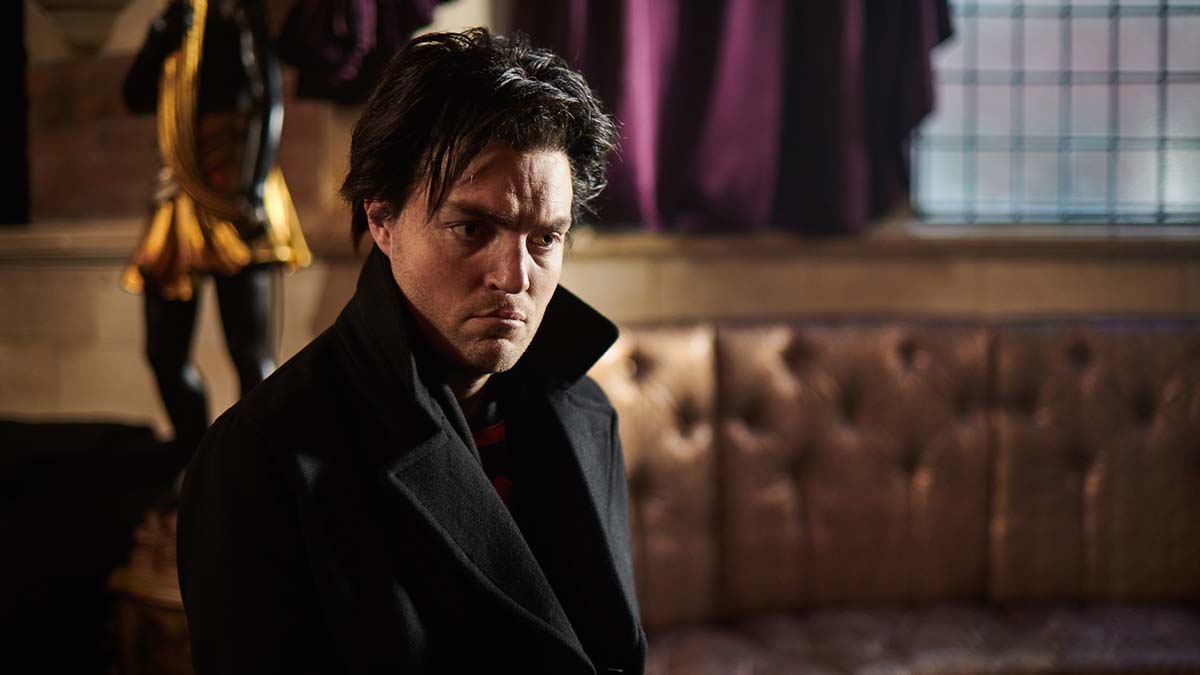 Fletcher Dennis (Tom Burke) arrives in Northampton with a mission to retrieve a necklace with a golden cross on it for his client Patsy Bleaker (Christopher Fairbank). After finding a room to rent with Becky (Ellie Bamber), Fletcher crosses paths with Faith (Siobhan Hewlett) who almost died when a sex game went wrong. Fletcher realises that Faith is entwined with the mission he’s on and the two work together but reality and fantasy blur as they discover a twilight world full of odd characters.

‘The Show’ from director Mitch Jenkins and writer Alan Moore is a bizarre film noir fantasy that is like a more twisted version of star Tom Burke’s ‘Cormoran Strike’ series. Prioritising stylish flair and theatrics over a strong narrative, ‘The Show’ is definitely not going to be everyone’s cup of tea and whilst I admire the film-makers for trying to do something a bit different, it unfortunately left me feeling very cold.

Tom Burke is essentially playing Cormoran Strike so this role is hardly a stretch for him. The set-up is very much private detective and assistant, as in the Strike series, and while there may be some slight differences between Fletcher and Cormoran, they aren’t enough to set the two characters apart. Burke is also hampered by a terrible wig that is far too large for his head and just plain distracting. The cast is fleshed out with colourful performances but the acting really does vary. Burke needed a strong female lead opposite him and unfortunately, he doesn’t get that here with Siobhan Hewlett. The chemistry is off and their performances just don’t gel. Beyond that, the way the characters are pulled together is too tenuous to be believable.

There are plenty of other weird and wonderful characters in the mix too but barely any of these get fleshed out. Richard Dillane as Henry Gaunt sports a superhero mask and spies on the activities of everyone in town, but his character doesn’t add anything to the story. Similarly Antonia Campbell-Hughes plays oddball Monica Beardsley but aside from two scenes, there’s little reason for her being in the film.

During the course of ‘The Show’, it tries to establish a dream world and a real one, with the two being intrinsically linked. The dream world feels more like an excuse to be wacky while in the real world, all of the characters Fletcher meets feel like they could be from the dream world. Everything is just a little too weird to work and it’s hard to draw much of a contrast.

‘The Show’ is an interesting idea but for me the execution didn’t pull it off. At almost two hours in length I found the film over long, packed with too much dialogue and not enough plot to keep you hooked. Burke is a fine actor but he’s under-utilised here, lost among a story that may be fantastical but doesn’t make a whole lot of logical sense. The end hints that we may see these characters again but honestly, I’m not overly keen to revisit them.