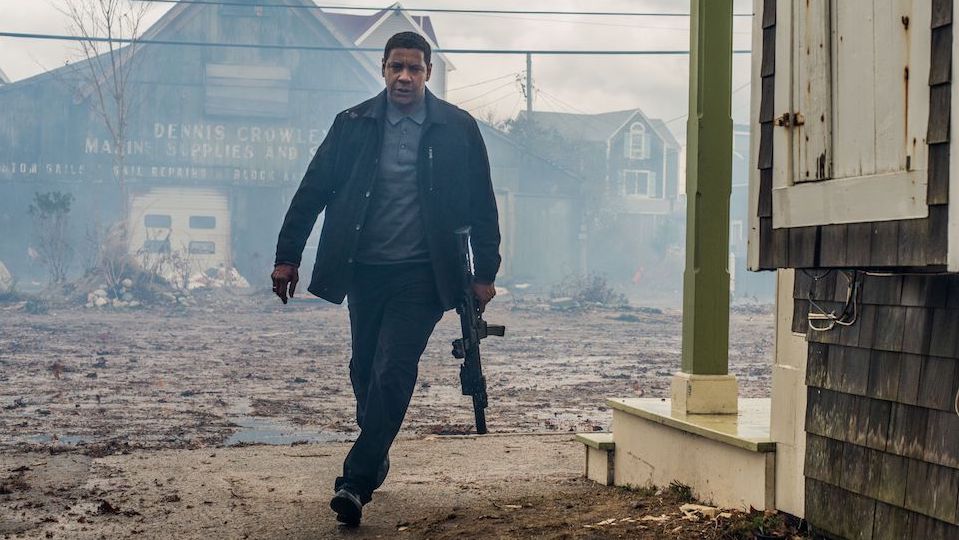 I’m a big fan of the action movie sub-genre of older dudes – with very specific sets of skills – battering and shooting people. Keanu Reeves and Liam Neeson are the luminaries of the sub-genre, with John Wick and Taken’s Bryan Mills setting a very high bar in the middle aged men murdering mercenaries stakes. Then in 2014, Denzel Washington rebooted The Equalizer as a former CIA black ops agent, righting wrongs in a very precise and brutal way. And it was a pretty damn good movie, and all of a sudden, Reeves and Neeson had some company at the head of the table.

The sequel however, is a bit of a let down. It’s a film that wants to have its cake and eat it, and then smash your face into it, and then make you eat it too. The first film skated by on a slick, simple plot, fantastic and brutal action, and a mighty performance from Denzel Washington. Honestly, that’s all they needed to do again for the sequel. Unfortunately screenwriter Richard Wenk and director Antoine Fuqua decided to go big, and the film ultimately collapses under its own weight.

Robert McCall (Washington) is now living in the suburbs of Boston, working as a Lyft driver, whilst simultaneously doing his equalizing work. He helps an old Holocaust survivor track down a painting of his sister. He tries to keep his young neighbour Miles (Ashton Sanders) off the street corners and away from the gang life. He even finds time to go Istanbul to retrieve a girl who has been kidnapped by her father. When a young beaten up girl is dumped in the back of his car by some coked up wannabe Wall St types, he doles out the vengeance in bone breaking fashion.

But then the past comes back to haunt him – as it so often does with these ex special forces types – and McCall finds himself in the middle of a complex conspiracy involving his former friends and colleagues Susan (Melissa Leo) and Dave (Pedro Pascal). Unfortunately it’s not an interesting enough plot development to kick the film into gear. This is not what I want from an Equalizer film. I didn’t buy the ticket for boring CIA shenanigans about things that happened twenty years ago. I bought the ticket to see Denzel setting his stopwatch and then despatch a bunch of Russian gangsters with power tools.

And The Equalizer 2 does deliver on those basic B-movie middle-aged male fantasy thrills. It just also wants to be a deeply serious study of society, and what sort of world we want to leave behind. Added to that are the literary allusions, and massive smack-you-in-the-face metaphors, and the film feels stretched, sluggish, and dull.

I get the ambition to make it something more than it is, and this should be applauded. But The Equalizer was more than enough. Being a B-movie was more than enough. But if you are going to get Denzel Washington to come back and make a sequel for the first time ever in his career, I suppose you’re gonna have to give him a bigger canvas to paint on. All that being said, I still really hope they make a third.

The blu-ray disc comes with a fairly decent selection of bonus material.  There’s over 20-minutes of deleted and extended scenes to enjoy. There’s a short featurette about Denzel Washington returning to the character, in what is his first ever sequel in over 40-years in the movie business.

There’s also a short piece on the action scenes, breaking down the “Equalizer-Vision” scenes where everything slows down and McCall starts unleashing meaty slabs of justice on the various goons who get in his way. There’s a piece with director Antoine Fuqua and the producers talking about the cast and waxing lyrical about each of them. There’s a moment where one of them says they couldn’t have made the movie without Melissa Leo and Bill Pullman returning. You really could have done.

If you so desire you can also watch the film with a trivia track – little onscreen graphics popping up every now and again with interesting titbits. Antoine Fuqua must not have been available to do a commentary. Finally there’s a selection of NBA TV spots for the film.