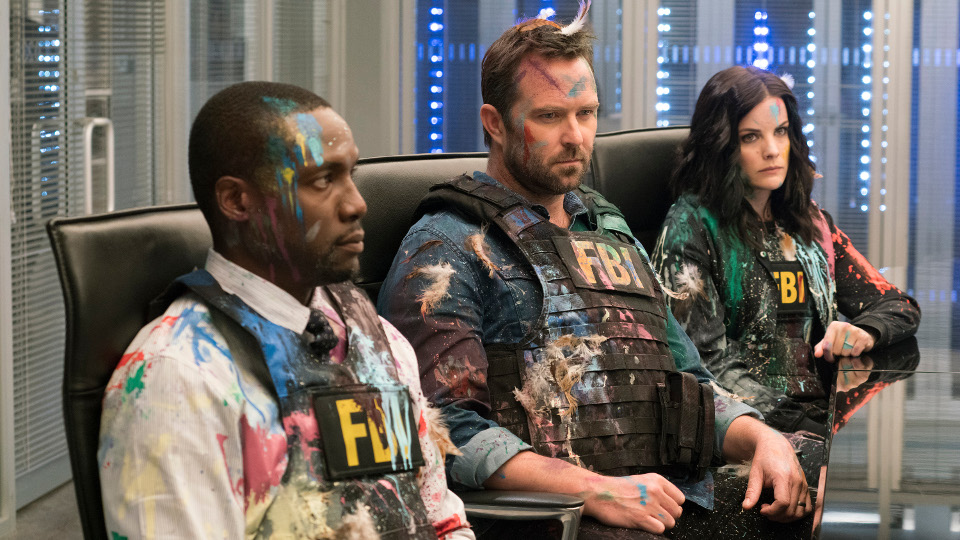 On the latest episode of Blindspot, the FBI team faced an explosive threat.

The episode opened up with Zapata (Audrey Esparza) taking a run in London. As she ran she had flashbacks about recent events. Her run was disturbed by a phone call from Madeline Burke (Mary Elizabeth Mastrantonio) as she passed the London Eye. Burke informed her that she had sent a file found on Kira’s hard drive. Zapata took a look and said it would be a problem but Burke said it could be an opportunity.

Picking back up with the cliffhanger from the previous episode, Weller (Sullivan Stapleton) was asking Jane (Jaimie Alexander) what she was holding behind her back. Roman (Luke Mitchell) appeared as an hallucination and said that Weller knew and that she should kill him. In the end she gave up the poisoned syringe and said she had it to end things on her terms when her poisoning got worse. Weller assured her that they would find a cure and took the syringe from her.

Meanwhile, Patterson (Ashley Johnson) was on a date night with a guy called Lincoln (Dustin Milligan). She was planning a one night stand and gave him a fake name. She took him home and turfed him out the next morning after spending some more time in bed together.

At the FBI, Director Weitz (Aaron Abrams) came to brief the team with some bad news. Weller said that Patterson was running late so Weitz got to it. They had discovered that Zapata wasn’t on the private jet that crashed. Instead the evidence pointed to her killing Kira thanks to the child that saw her after the murder. As ever Reade (Rob Brown) didn’t believe it. Weitz explained that the CIA had been using Zapata’s gambling debts to get her to spill classified info about Jane.

Rich (Ennis Esmer) called the team in because he’d solved a new tattoo. The clues pointed to the location of a bomber-for-hire. The team headed out and Patterson showed up, annoyed at Rich for briefing the team on their work without her.

While the team were off after the bomber, Patterson and Rich went to brief a group of Quantico recruits who were to be shadowing them. One of the recruits turned out to be Lincoln, the guy from the night before. She was suspicious of him but he promised that it was all just a coincidence. Patterson went to talk to Weitz about Lincoln. Before she could ask he told her to look after his favourite nephew who, you guessed it, was Lincoln.

Suddenly, Burke arrived unannounced at the FBI to drop off some of HCI Global’s files. She was trying to look helpful by saying she wanted to correct Crawford’s past mistakes. The team knew there was something fishy going on but had no proof. Her files led them to the location of the real bomber and his next target.

Weitz suggested that they bring the field work to the Quantico recruits as they weren’t allowed to go out into the field themselves. While Weller, Jane and Reade went out into the field, the episode tried something new and stayed in the FBI offices. It worked really well with Patterson and Rich leading everything while updates came in over radio. It gave an idea of what happens at the FBI behind the scenes instead of just showing the action in the field.

Eventually the clues led to subway lines been used to bomb a building. They also managed to link the bomber with HCI Global. Lincoln was the recruit who worked out which train was carrying the bomb using his math skills which impressed Patterson. Staying with the recruits we got to hear the scene play out over radio as Jane climbed onto the roof of a speeding train and reprogrammed the bomb.

The FBI had saved the day again but they weren’t the only winners. Burke’s information had stopped the crime and she had orchestrated the whole thing. She used it as a PR opportunity making herself untouchable.

Elsewhere in the episode, Rich kept going on about a ‘Book of Secrets’ that he’d been pursuing on the Dark Web for years. He wanted Patterson to help him find it as he thought it could help Jane. One of Roman’s data caches had made reference to it.

At the end of the episode, Jane snuck out at night to meet with an unknown woman. She gave her half of a large sum of money as upfront payment for a mysterious delivery. What Jane didn’t know was that Weller had followed her and took a photo of the unknown woman.

Can’t wait for the next episode? Read our Blindspot 4×04 Sous-Vide preview.