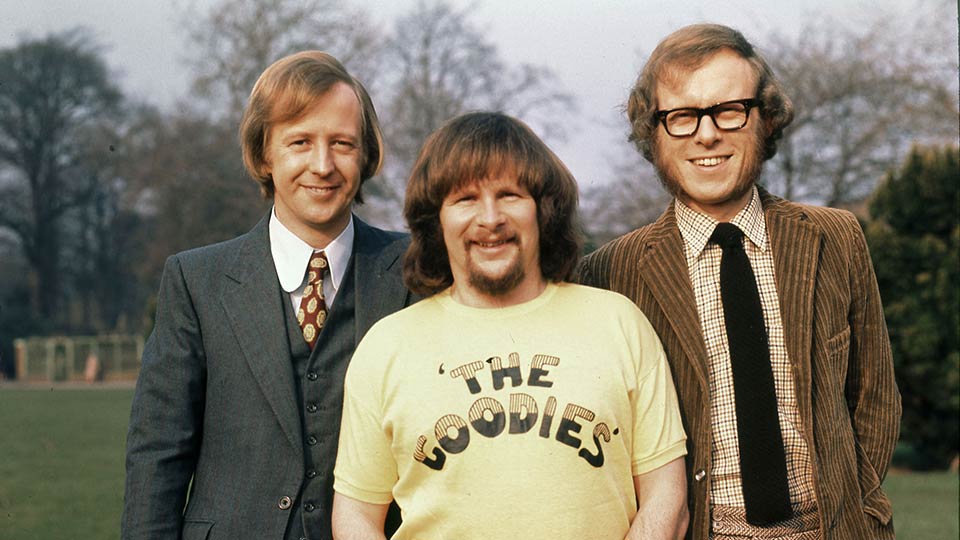 The 1970s is rightly lauded as the golden age of British sitcom. Long-running series that established themselves in the creative boom of the 1960s such as Dad’s Army and Steptoe & Son were still going strong at the dawn of the decade. But the 1970s was a much bleaker time in the UK’s history. Endless industrial disputes and strike action, a three-day week, and other governmental failings left the economy flailing, rubbish piling up in the streets and bodies unburied. No wonder sitcoms blossomed to give the general population something to lighten the mood!

There’s nothing quite as satisfying as a TV show that presses the reset button at the end of every episode, and presents much-loved characters in cosily familiar settings week-in, week-out. Here’s our rundown of ten (and there could have been many, many more) great sitcoms that kept the British laughing during a dreary old decade!

Carla Lane’s great comedy of the late 70s and early 80s told the story of the potential a woman has to escape from the boredom of her domesticity and a husband who takes her for granted by having an affair. Not a new idea (Noel Coward’s Brief Encounter notably told the story in the 1940s), but one that was pressing in the 1970s when divorce rates were climbing. Wendy Craig is perfectly cast as Ria Parkinson, whose story we follow. Geoffrey Palmer, a sitcom veteran but usually in stuffy or military parts, is great as her husband and sparring partner. There’s an early leading role in comedy for Nicholas Lyndhurst as their son Adam. The other son, Andrew Hall’s Russell, is invariably not speaking to his father. Bruce Montague’s charming Leonard is the tempting lure away from domestic dreariness and endless petty squabbles, but is the grass necessarily greener on the other side? The title takes its name from the Dolly Parton song Love is Like a Butterfly.

9. Are You Being Served?

This sitcom was set inside a department store, and was written by Jeremy Lloyd and David Croft, who would go on to write ‘Allo ‘Allo together the following decade. Ideas of English class and snobbery are at the forefront again, as the shop is for a particular standard of clientele. Double entendres, often pertaining to Mrs Slocombe’s pussy, reign supreme. John Inman’s Mr Humphries placed a homosexual character centre stage – quite rare at the time. In a mark of the cruelty of the passage of time, the principal cast are all now deceased, but their work lives on. The cry of, “I’m free!” will ring in audience’s ears for decades to come.

8. Whatever Happened to the Likely Lads?

The sequel to The Likely Lads is much better-remembered, largely because the original black and white episodes largely no longer exist. Returning in colour, and catching up with Terry and Bob when they are older, but no wiser, the continuing adventures of two working class men in the north east and their respective partners/spouses, in common with most British sitcoms, placed class tensions at the heart of the conflict. This is largely because Rodney Bewes’ Bob is socially aspiring and wants to seize opportunities to ‘get on’. The writing partnership of Dick Clement and Ian La Frenais was a fruitful one, and their characters capture very precisely the period in which they were written.

A great idea for a sitcom, which has to be set in one primary location in which the main characters are, at least in some sense, trapped, is to place them inside a prison, which is exactly what Dick Clement and Ian La Frenais did for their next big sitcom. Ronnie Barker was already a huge star and rightly considered one of Britain’s greatest comedy character actors. He was teamed up with the much younger Richard Beckinsale, who continued his meteoric rise in a career that would be cut short by his tragically premature death in 1979. Fulton Mackay was sterling support as the warden who provided the antagonism, and Brian Wilde (best-remembered as Foggy in Last of the Summer Wine) was a terrific foil for everyone as the gentle and easily-duped Mr Barrowclough. Other great actors such as Christopher Biggins, David Jason, Peter Vaughan and Brian Glover popped up in semi-regular parts. It’s odd that watching an all-male cast serving time is so comforting.

6. The Fall and Rise of Reginald Perrin

If the Second World War (Dad’s Army), poverty (Steptoe & Son) and life in prison (Porridge) seemed unusually dark ideas for extremely successful situation comedies, then the unravelling mind of a suicidal middle-aged man having a mid-life crisis is arguably the bleakest premise to turn into a subject of mirth. Outstanding comedy character actor Leonard Rossiter, who was peerless in physical comedy, and equalled only by Arthur Lowe and Ronnie Barker in terms of his ability to derive a laugh from any material, is mesmerizingly good as Reggie Perrin, creating one of the most memorable characters in the history of British television. Unfortunately, the production is cheap and cheerful, and some of the performances (notably Pauline Yates as Reggie’s patient wife Elizabeth) don’t adequately complement Rossiter’s manic energy. David Nobbs’ books are simply wonderful, and his scripts for TV aren’t quite as good. Despite that, there’s much to enjoy about the first two series of Perrin, though the third and final one is hit and miss.

Tom and Barbara Good are determined to be self-sufficient, and produce all of their own food. The tension arises because their hippy lifestyle conflicts with that of their next-door neighbours, the Leadbetters, who are socially conservative. Way ahead of its time on environmentalism and food faddishness, The Good Life has stood the test of time. One of the reasons for its success is its inspired casting. Richard Briers and Felicity Kendal pair up perfectly as the loveable Goods, whilst the formidable Penelope Keith and the sublime Paul Eddington never miss a beat as the Leadbetters. John Esmonde and Bob Larbey tend to be a slightly forgotten comedy writing duo, but The Good Life is amongst their greatest work, and captures English suburbia succinctly.

In a classic role reversal, the mild-mannered George (the ever-affable Brian Murphy) has a very low sex drive, whilst his wife Mildred (Yootha Joyce) is insatiable. Add in Mildred’s desire to be upwardly socially mobile and George’s simple ways that she finds endlessly embarrassing, and class snobbery as well as sexual tension once again plays a role in driving the comedy. The mismatched couple provide plenty of conflict. At times a ruthlessly honest depiction of the dreariness of living the suburban English dream, George & Mildred offered some social commentary as well as plenty of laughs. It was a spin-off from Man About the House, where Murphy and Joyce played supporting characters to Richard O’Sullivan’s Robin Tripp (who had his own spin-off in Robin’s Nest). They were all written by Brian Cooke and Johnnie Mortimer, whose partnership ended when Cooke wrote his own 1980s sitcom Keep It In The Family, and seized the chance to earn a fortune in the United States.

One of the comedies that defined the decade, The Goodies can fairly fall into situation comedy territory (where Monty Python’s Flying Circus cannot) because there were plots upon which the episodes were based, rather than just sketches and songs, and the trio usually started the episode at their HQ. Again, class played its part, with Bill Oddie as a working class hippy, Graeme Garden as a pragmatic academic, and Tim Brooke-Taylor as a callow conservative dreamer. The Goodies had the same anarchic quality as the Goon Show, but brought slapstick and visual humour to life with brilliant wit, unequalled before or since. The series ran throughout the decade, even returning in the early 1980s on ITV. They had no shortage of ridiculous ideas, but also like to gently make political points, such as in tackling the Apartheid system in South Africa and bemoaning the state of the NHS. Whatever the story upon which their capers were hung, the Goodies was consistently hilariously funny.

Leonard Rossiter’s other huge success playing a leading role in situation comedy came with Rising Damp. His downtrodden, deceitful, cowardly landlord Rupert Rigsby is one of the all-time unforgettable comedy creations – grotesque, yet oddly sympathetic, perhaps because he’s such a pitiful character. Race relations stayed omnipresent but in the background of writer Eric Chappell’s best work. Rigsby is perpetually unable to understand how his female tenant, Ruth Jones (Frances de la Tour) can find Philip (Don Warrington) more attractive, because he can’t see beyond Philip being black. The well-spoken, suave, sophisticated, refined and bright young medical student is given plenty of opportunities to embarrass Rigsby, whose inherent bigotry is always the butt of the jokes. The weedier medical student, Alan, who has no luck with the girls, is played by Richard Beckinsale (Porridge). The dynamics between the four main characters creates many brilliant situations, and most of the twenty-eight episodes are tightly-written and very funny. They are all superbly performed by a dream cast that combined to create comedy gold. High-calibre guest actors such as Peter Bowles, Henry McGee, Robert Gillespie, Andrew Sachs and Ian Lavender would pop up in supporting parts. Spending time in Rigsby’s dank, mouldy, dour lodgings is always food for the soul. A rare standout sitcom hit for ITV (Yorkshire Television in this case).

It’s hard to put anything else in the top spot, because John Cleese’s sitcom about a frustrated hotelier in Torquay tore up the rule book and left an almighty shadow of influence on modern British comedy. All of the old tropes are there – Basil Fawlty is trapped in a life he hates, in a barren, loveless marriage to Sybil (Prunella Scales) and in a job he utterly detests, having to look after people he simply cannot abide (the guests who pay his wages). The class snobbery is there too: any guest with the title “Lord” is fawned all over, however much they may be confidence tricksters. Full of pent-up aggression that erupts into rage that he takes out on his working staff, especially the hapless Manuel (Andrew Sachs), who is often physically abused, Basil is in many respects a monster. What saves him is his caustic wit and pathetic cowardice. The English embarrassment of forgetting somebody’s name or mentioning the war to the Germans is taken to a whole new level. There may well have only been twelve episodes in two series separated by a break of several years, but around ten of those twelve are simply outstanding half hours of pure television heaven. Fawlty Towers is a work of genius that stands up well today, and one which forced comedy writers and producers to radically rethink the possibilities of the sitcom genre. I doubt it will ever be beaten.