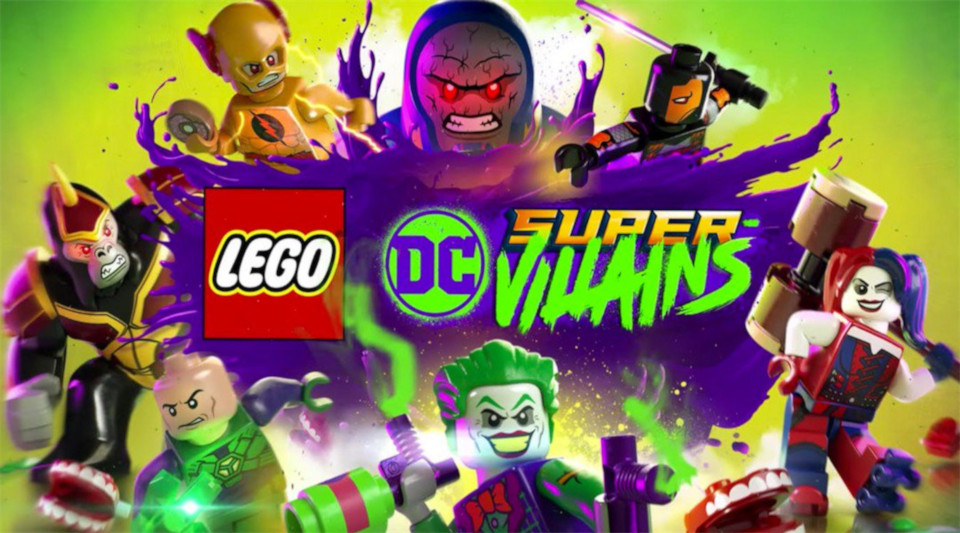 “The Justice League has disappeared, leaving Earth’s protection to their counterparts from a parallel universe, the “Justice Syndicate”, a new, strange group of wannabe superheroes with unclear intentions. Whether it’s Graffiti Spraying walls in Metropolis or using Fear Toxins to scare characters in Gotham City, super-villains have full reign to use any trick in their arsenal to stop the Justice Syndicate’s evil scheme.”

The list of playable characters is absolutely massive, you can view the full list here and each is rendered beautifully and come with their own unique abilities and distinct animations. Clearly a lot of love has gone into recreating all the characters in LEGO form. I’ve played a lot of LEGO video games with my 5 year old and I must say the graphics just get better and slicker with every release.

At the start of the game you get to create your own super-villain which is a nice touch. There are loads of customisation options and you can unlock power-ups and new skills as you progress through the game. My son decided to make a girl all dressed in pink armed with what I think are 2 giant fish. Lead characters include favourites such as the Joker, Harley Quinn and the Scarecrow to name but a few.

You are then set loose into the world as you begin to break out new super-villains from prison or recruit them to your cause of exposing and taking down the Justice Syndicate. If you’ve played other LEGO games you’ll feel right at home pretty quickly as the overall format hasn’t changed much from previous titles. Namely there are various puzzles to solve in each level with a bit of combat dropped in here and there plus the occasional boss battle to add a bit more challenge and variety.

The puzzles themselves are really well thought out and require you to use all of the different characters at your disposal to get through them offering loads of variety. For example you might need to freeze something, shrink to a tiny size to fry some circuit boards or give something a hit with a massive mallet. I never felt that any characters were needless and everyone was used in each level. If you do get stuck there is always a handy tip screen to help you make your next step.

Each level starts with a cutscene which helps to keep you in the loop of what is going on with the story. Once again these are very well made and are full of tongue in cheek humour that I’ve come to expect from the LEGO games. The voice acting is excellent.

The environments for each level are very detailed and encourage you to explore as well as come back in free play mode with your own choice of characters to explore every part of each level and find all of the collectables. You unlock free mode once you have completed a level in story mode and are then free to explore as you please. There are literally tonnes of collectables and hidden items to find so if you are a completionist you will be in heaven with LEGO DC Super-Villains.

Combat plays out really well although it can feel very chaotic at times. It is all too easy to find yourself smashing seven bells out of one of your guys without realising, but given that there is no real punishment for doing so it’s far from a game breaker. Once again the specialties of each character come to light in combat and each feels distinct from the others although it generally boils down to button mashing. The boss battles are slightly different and require you to figure out the mechanic.

A new edition from previous LEGO games I’ve played is the chance to explore the city at large. Here you can hijack vehicles in a kid of LEGO GTA style and cause havoc around the city. I won’t lie, the driving mechanics are awful and I felt out of control for most of the time I was in a vehicle. Whilst these driving parts merely serve as part of getting to the next level they did offer a little variety.

You can play LEGO DC Super-Villains solo or in co-op mode. In single player with the whole screen at your disposal the game is a dream to play. In local co op things are not so good. The screen is split down the middle giving each character just half of the TV to use. Even on today’s larger screens I felt this really hampered the game and I found it frustrating not being able to see / find what I needed to do next. This split-screen also makes combat even more chaotic. In one boss battle I found the camera on both characters simply spinning around us constantly as it tried to keep track of us and the boss. The split-screen has been a failing of LEGO games in my opinion with the only solution I can see is the developers adding LAN support or online play.

In summary, LEGO DC Super-Villains is a great addition to the LEGO video games franchise. It offers stunning visuals and a giant roster of playable characters. It’s challenging enough for adult gamers and accessible enough for younger gamers too. Whilst definitely aimed at the younger market, fans of the previous LEGO games and the DC comic world will be also be pretty pleased with what’s on offer here.

LEGO DC Super-Villains was reviewed on Xbox One using a promo disc provided by the publisher.