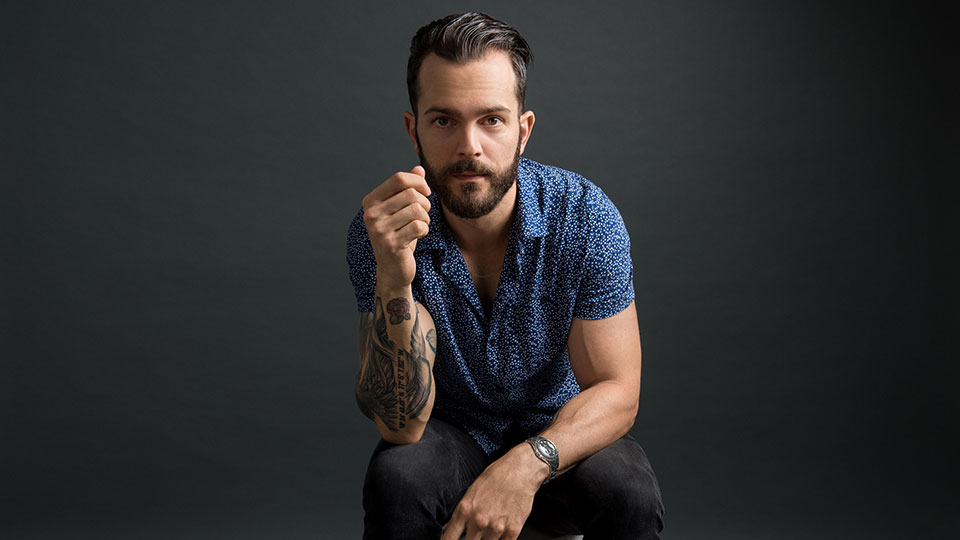 Singer-songwriter Ryan Kinder first burst onto the country music scene in 2016 with his single Close.

The romantic, sultry song, which shows off Kinder’s bluesy vocals to perfection, has racked up over 30 million streams on Spotify and was included in their Best of 2017 playlist. He also released his debut EP, The Road, earlier this year, and has been winning UK fans over through a string of live appearances since his debut at Country to Country in March, including performing at British Summer Time festival in Hyde Park. Most recently, he toured the UK last month opening for Drake White.

Ahead of his opening set at London’s KOKO as part of Country Music Week, we caught up with Ryan to find out more about what’s he learnt from touring, his plans for new music and what he loves about playing in the UK.

How have you found touring with Drake White?

It’s been fantastic. I love being over here. It’s the third time we’ve been over this year. It’s a lot of fun, especially with Drake. We grew up very close to each other in Alabama, so we have a lot in common. His band’s been a ball. It’s been a fun tour.

What is it that keeps you coming back over to the UK?

I just love it here. I love everything about it. The fans are zealous music lovers. I love the food, I love the scenery. It’s just a fantastic place.

Is there anything that surprises you about the UK audiences? Do they react differently compared to those in the US?

Sometimes. It depends on where you are, honestly. I think I talked to somebody about this not too long ago. It depends on the location. We played Glasgow and that was in an actual church – stained glass windows and the organ was still there. Everybody was very quiet and respectful which was awesome. I don’t know if that’s just because it was a church or that’s just how they listen in Glasgow, but we played a couple of bars and everybody got rowdy when it would warrant the rowdiness, and Drake as well. He gets a bit crazy in a show and it’s fun. There’s a different level of that depending on the venue. So it’s situational, I guess. I can’t really completely answer that question wholeheartedly. [laughs]

Is there anywhere you’ve particularly enjoyed playing in the UK – either on this tour or previous visits?

Hyde Park, last time we were here. We got to play the same festival as [Eric] Clapton and that was a lifelong achievement moment, because the first concert I ever went to was Clapton in Birmingham, Alabama. That was the moment I realised that’s what I want to do for the rest of my life, and for it to come full circle and see Clapton in Hyde Park and actually be on the bill playing was awesome.

You’ve toured with some huge names – John Fogarty, ZZ Top, Zac Brown Band… What have you learnt from touring and being on the road?

You learn something different every time. Everybody has their own quirks and their own ways of doing things. So you take what you can from every person. From the biggest artists that I’ve had the opportunity and the blessing to play with, it’s their complete tendency to be kind to the others. They’re hospitable and so nice to everybody, from the lighting director to the stage hand to their band to the opener, they’re kind and so happy for everybody to be with them. They understand what it takes for everybody to be away from their family for so long and to be a part of their dream and also living a dream through what they’re doing. It’s a commonality with that level of artist.

Your current single is Stay – can you tell us a bit more about the song?

I wrote it with a very close friend, Luke Sheets and Fred Wilheim who I’ve written a lot of songs with, and we wrote it for a friend’s wedding. It was one of Luke’s best friends, Matt Macintyre’s wedding, and they asked us to write a song for the wedding and we did. Before we knew we were writing for their wedding we started writing a section, and Fred pulled up on YouTube the Beatles singing Help!. It was the vocals singled out, and we were like, ‘wow, this is how powerful they were together and how perfect that mix was. We should write a song with a powerful chorus like that.’ And that’s how we got to Stay.

Is that approach typical of your songwriting process?

I don’t think there’s ever a typical one, because honestly anything could spark a song and when you jump into a writing session a lot of the time you’re meeting the other songwriter for the first time. It’s kind of like a first date – you gotta figure out their quirks and how they do things and meld together to write a song after you’ve just met each other. It changes every time. A lot of the time you know certain people’s processes after you get to know them and write with them, so you can kind of lean towards the normal way of how they write and you write and how you mesh together. But it’s different every time.

You turned 30 earlier this year – has that affected your approach to your music and your writing?

Yes and no. There’s not some massive moment where a coming of age realisation happens, but you do look at things a little differently as you get older and obviously everybody knows that things change and you’re willing to appreciate different things. You try to live as much as you can in the moment.

You also played the Opry earlier this month. Can you describe what it’s like to play at such an iconic venue?

It’s an unbelievable honour to play the Opry every time. I mean, they took a piece of the Ryman stage which was the original venue for the Grand Ole Opry – Johnny Cash, Waylon Jennings, everybody has stood on that hallowed piece of ground. It’s not lost on any person. If it is lost on a person they don’t truly understand the gravity and the weight of the situation they’re in and where they’re standing and what they’re playing for. It’s unbelievable.

Is it somewhere you’d like to return to in future?

You started as a songwriter before becoming a recording artist. What was that transition like for you?

I think it was always hand in hand. I don’t think anybody delineates one from the other when they’re first starting out. There’s always the idea of trying to get your songs out and if the opportunity presents itself to write for somebody you honestly take it. I don’t think it’s a fork in the road type of thing. They’re one and the same, if you have the opportunity.

Is there anyone you’d particularly like to write with in the future?

David Hodges, I’ve always wanted to write with. I think he’s a fantastic songwriter. I’ve got to write with one of my songwriting heroes, Amy Wadge who’s written all of Ed Sheeran’s stuff. We got to play a show together and I didn’t know what she looked like, I knew her name. She got up on stage and started soundchecking Thinking Out Loud. I leaned over to my manager and I was like, ‘why is this girl soundchecking an Ed Sheeran song?’ and he looked at me like, ‘you’re an idiot. She wrote that song’. ‘Cool, good talk!’

What got you into music and made you decide you wanted to pursue it as a career?

I was in the eighth grade, and I was taking a guitar class just because my best friend was doing it and I wanted to hang out with him. I realised very quickly that I had an affinity for playing. And then in high school I took an English class where Mark Barber, who was the teacher, played a movie the very first day – Dead Poets Society. The way he taught it and the way he spoke about it and his passion for writing fired me up. I wanted to be a closet transcendentalist Renaissance man, and he was the reason I wanted to write beautiful lyrics. He saw that in me and gave me his only copy of Leaves of Grass, and that was probably the moment I realised I wanted to be a singer-songwriter.

Well it kind of coincides because there’s one writer that’s the same for both the songs. I Can’t Make You Love Me by Bonnie Raitt, Allen Shamblin was one of the songwriters. And The House That Built Me – also Allen Shamblin, which he wrote with a guy called Tom Douglas who’s the premier songwriter in Nashville. He’s one of the best lyricists of our time. So Allen Shamblin’s one of my favourites.

Head back to the States, we’ll play up until end of November, a little bit in December. I’m gonna keep writing and hopefully finish up the full album by quarter one, early next year.

Can you give us any hints about what the album will be like?

Still figuring it out myself. It’s an ever-changing, ongoing process, trying to find out what works the best and what we’re happy with, and put out the best music we can at the time.

Do you have plans to come back to the UK soon?

Next year for sure. We’re gonna try and get back at least two times, hopefully more.