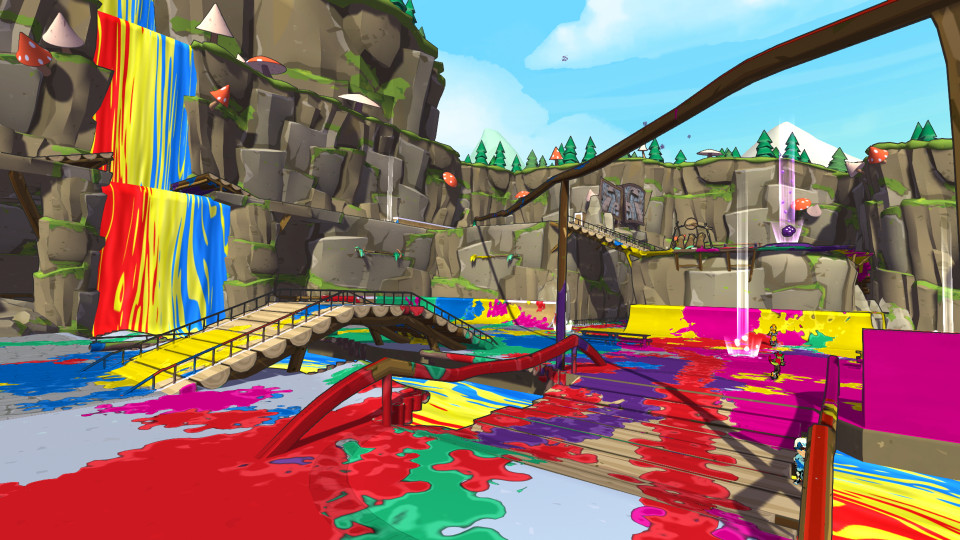 There’s a lot to be said about Crayola Scoot in the short time I played it (my eight year old promptly kicked me off of the Xbox One so they could play and wouldn’t give it back!). Taking me back to the good ole days of Tony Hawk’s Pro Skater but with scooters, this little number has it all. From the cute graphics, the colourful set-up (can’t be without that!) and swanky soundtrack. I’m absolutely in love with it, and once my kid gives me back the controller, I’m going to pour some major time into winning that Colour Cup!

Set in a futuristic world where the landscape is ripe for the scooter-taking, you’ll have loops, ramps and rails as far as the eye can see. The playground is endless! You can compete in competitions or just hang out in the central hub riding around and practising your scooter skills. The hub is also where you’ll find things like a shop to spend your hard earned competition coins. You’ll be able to upgrade your scooter for a little cash and in turn build stats to see your way up the leaderboard.

Speaking of leaderboard, the Colour Cup is your main objective to win overall. You’ll compete against a vivid cast of characters, ranging from an alien to a zombie whose only wish in their undead life is to scoot! As there’s only a handful of competitors, they’re all fantastically original from one another and a delight within themselves. Occasionally as your fame rises (from winning standard competitions) you’ll receive challenges to take them on one-on-one. Winning will give you a chance to use their scooter parts and of course, put you up a notch on the leader board.

The competitions themselves are fun with loads of variety. You’ll have modes to lay down the most colour on the board, pull off the sickest combos, or collect crayons hiding out around the place before someone else does (Amongst tons more!). Each of these houses three different levels of difficulty, so you can learn and perfect at a steady pace.

View some screenshots of Crayola Scoot in our gallery:

I can’t say enough about how cool the stylizing is paired with the bumpin’ tracks. So upbeat and wonderful, it’s hard not to get hooked to the Crayola Scoot universe in an instant. There’s so many tidbits that just makes this game feel good to play. On the feel good to play note, the scooters themselves control very easy and just generally are a blast to ride around. Pulling off basic tricks is no sweat–it’s the combos you’ll have to master down the line. Even with that though, everything feels well within the player’s reach without being too difficult overall. No controller throwing here if you have a younger one–I suspect they’ll be lots of smiles instead.

Now, time to head back from writing this to drop in for some multiplayer (up to four players) with my kiddo. It’s wicked easy to sort out and nicely done with split screen. We like to play as red and yellow (ketchup and mustard) for giggles. Wish me luck!

We were supplied a digital code for Crayola Scoot by the publisher.