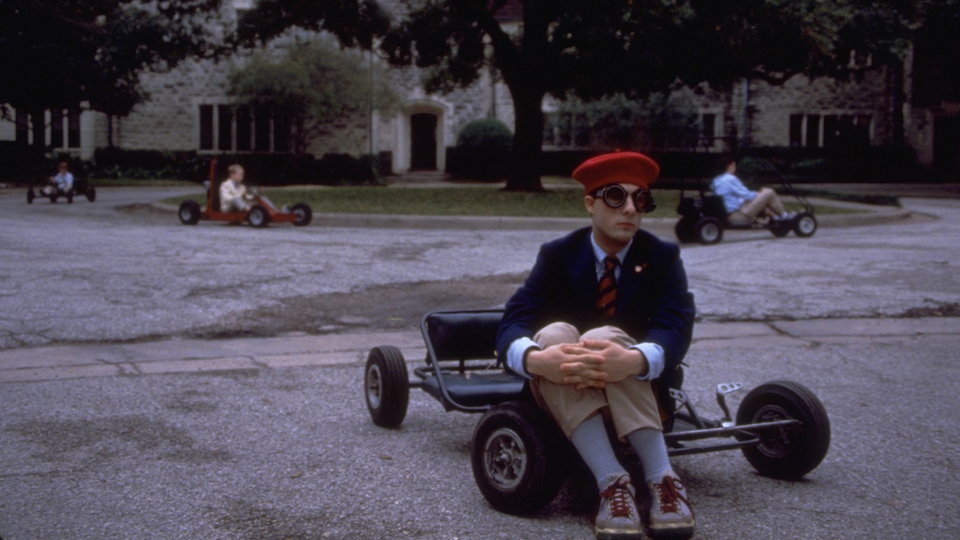 Rushmore was the film that announced Wes Anderson to the world. His sophomore feature – after the largely unseen Bottle Rocket – is an acerbic comedy drama about an eccentric high school student, and offers the first real glimpse into the affectations and heightened reality that would come to define the Anderson Cinematic Universe. As with a number of his other films, Rushmore has been given a spiffy new release, digitally restored, and packed with special features courtesy of the Criterion Collection.

Jason Schwartzman is Max Fischer – a precocious student at the exclusive private school Rushmore Academy. He is involved in nearly every extra-curricular activity the school has to offer (Model UN, French Club, Debate Team, Stamp and Coin Club, Lacrosse team manager, Calligraphy, Fencing, Trap and Skeet, Rushmore Beekeepers, to name but a few). He also stages elaborate theatrical productions, including his own version of Serpico, and a Vietnam epic with extravagant special effects. All of this has contributed to him being a seriously below average student, and his future at the school is under threat.

Any attempts to focus on his studies are thwarted by the arrival of Rosemary (Olivia Williams), a new first grade teacher at the school, who Max immediately falls in love with. To make matters worse, she begins dating Max’s friend/mentor Herman Blume (Bill Murray), a millionaire industrialist whose two kids also go to Rushmore. Max and Herman go to war to win Rosemary’s affection.

Whenever I revisit the films of Wes Anderson in order to review them, I feel as if I am preaching to the converted. I don’t see his films as being an acquired taste. I think you either like them or you don’t. They’re so affected and (shudders at using this word) quirky, I get why people would find them grating and distancing. But they’re also so beautifully designed, smartly written and wryly poignant, I equally understand why so many people – including myself – find his films to be utterly charming. If Bottle Rocket was the blueprint of Anderson as a filmmaker, Rushmore is the stylistic blueprint for the rest of his career.

The British Invasion 60s soundtrack, the montages, precise composition, and delightful cast of eclectic oddball characters. Rushmore is stuffed with everything you either love or hate about Wes Anderson films. The three leads are all fantastic. Schwartzman in his first role is as brilliant and talented as you’d expect from a Coppola. Williams is equally good as the emotional and mature heart of the film, caught between these two morose, depressed and self-destructive males. But the film is stolen by Bill Murray, whose terrific, forlorn turn as Blume reminded the world what a great actor he really is, and kick started the second phase of his fascinating career.

This new UK release of the film comes with a new HD digital transfer supervised by Wes Anderson. There is a feature length commentary track, recorded exclusively for the Criterion Collection in 1999, with Anderson, co-writer Owen Wilson, and Jason Schwartzman. The special features also include an in-depth behind the scenes documentary directed by Wes’s brother Eric Anderson (who also contributes all the artwork for the release).

For the 1999 MTV Movie Awards, Wes Anderson directed three short clips of Max Fischer stage adaptations of three of the big films from that year: The Truman Show, Armageddon, and Out of Sight. These are all included on the disc. There’s also storyboards and storyboard comparisons. A selection of cast audition footage, and the original theatrical trailer.

The disc also comes with a full episode of The Charlie Rose Show, with in-depth interviews with Bill Murray and Wes Anderson. Finally there is a slide show of props, poster art, and other behind the scenes photos. This Criterion release also comes with a collectible poster, and a booklet of info about the film, including an essay by film critic Dave Kehr.