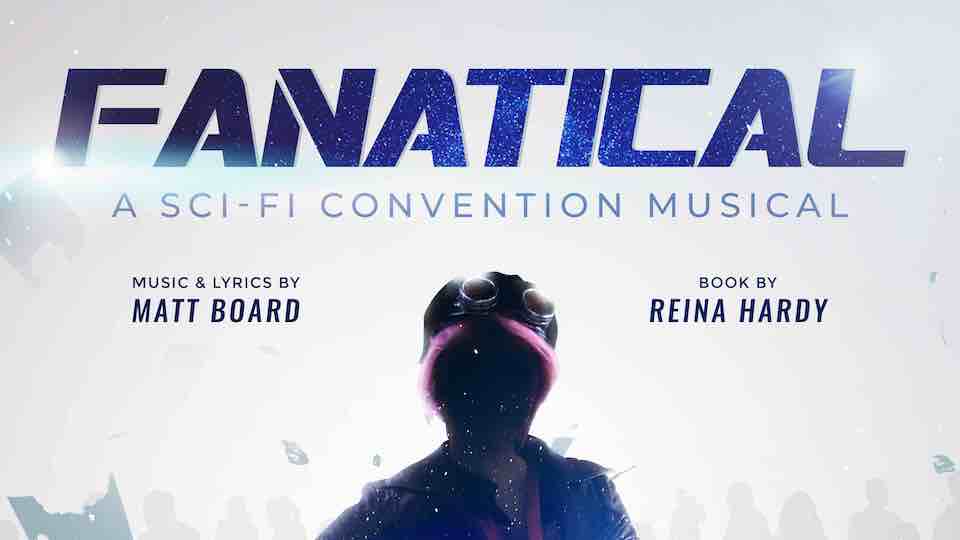 Comedy star Stephen Frost Stephen Frost (Whose Line Is It Anyway?, Blackadder, Have I Got News For You,) is set to appear as the reclusive British Sci-fi author Scott Furnish in Matt Board and Reina Hardy’s new musical, Fanatical, which will premiere at The Playground Theatre this November.

In a distant Galaxy the ragtag misfit crew of cargo ship Angel 8 are under the command of fearless pilot Iris Aucht. Meanwhile at a conference centre, somewhere in England, a collection of 1,000 fans gather from all across the UK for Eight Con One, the first ever official convention of the cult TV show. Scott Furnish is set to deliver a keynote speech and a piece of disappointing information to the die hard fans…

Stephen Frost kindly took some time out from rehearsals recently to talk about ‘stepping out of his comfort zone’ to sing in this show, juggling his improv commitments around it and how one particular Blackadder quote is still repeated to him daily nearly thirty years since the episode was broadcast.

Is musical theatre a new challenge for you? How did it come about?

Well, they asked me if was available to do it. I said singing is not one of my strong points, although I can sing, musical theatre is a little out of my comfort zone. It’s a different kettle of fish to being in a punk band! Thankfully I’ve only one song and it’s a semi-spoken-sung song. It’s been good fun up to now.

So rehearsals are going well?

Oh yes, we’ve been rehearsing for several weeks now and everyone’s working so hard. It’s not your standard West End type musical it’s more Sondheim-ish, more offbeat and jazzy. I don’t think Matt Board the composer would mind me saying that but it does make the songs a bit trickier to learn! But it does make it more original which is why I’m on board. I always try to do something new.

Can you tell us a bit about your character?

Yes I can now I’ve read the script properly! The show’s called Fanatical, it’s a sci-fi convention musical i.e. like for Star Trek, Doctor Who and Red Dwarf, fans turn up to these conventions. I’m Scott Furnish, the author who’s moved to the USA, and in the UK they’ve invited me over to this convention to give a keynote speech. I’m the writer and everyone’s so looking forward to meeting me…The problem is the show’s been cancelled and they don’t know that. So, I’ve got to be the bearer of bad news. I’m a bit cynical about the situation and then, in the second half, it’s about getting people’s faith back and the fans save the show. There’s been several animation shows that have had a second lease of life because people have said ‘no, keep it going’. Especially in this day of social media you can actually get together and make this happen, instead of writing a letter to the Radio Times in 1955 [laughs]. You can get all your mates together and say ‘let’s do something about this.’ It’s about the power of people working together to get something done that they like. Meanwhile, my character is cynical, drunk and jet-lagged. It’s a great part, no wonder I took it!

Does this mean you’ve hit pause on performing improv at The Comedy Store for now, then?

No, I will be doing my one show a month at The Comedy Store on a Sunday around this. If you’re doing a show all week and then, on a Sunday, to go and do improv is quite good fun. It’s great being away from the restrictions of a script. I’ve also got my Steve Frost Improv Allstars and we’ve managed to work that and a trip to the Galway Comedy Festival around rehearsals.

Are you into Sci-fi yourself?

Yes. Well, I was brought up on the original Doctor Who, William Hartnell and Patrick Troughton. I remember that in black and white, hiding behind the sofa, and all that. Then Blake’s 7 and the original Star Trek, I watched that. Then people ask if you’re ‘into’ sci-fi and I’ve always said no but I watched all that. I found myself watching sci-fi but not admitting that I was into it.

Do you think it’s still something that people are reluctant to admit to being into? This idea of a musical about the fans themselves is very new.

Exactly. It’s got that nerdy/geeky thing about it but I could watch Star Trek til the cows come home. I really enjoy it, it’s exciting, it’s fun and the geeky/nerdy side is part of what this musical’s about. Getting the geeks and the nerds and the loners together and it gives them something to live for. It’s like people wearing t-shirts of their favourite bands and going to see them, it’s exactly the same thing. Why shouldn’t they? What I’ve never understood why people come and watch comedy! [Laughs]

You’d a memorable role in Blackadder Goes Forth, of course, as leader of the firing squad. Do you still have people quoting at you in the street?

Every day. If I walk out of this door now – even my neighbours who I’ve known for thirty years – they still shout ‘Ready, aim, fire!’ at me. I’ve been in San Diego and some American while I was hiring a car shouted ‘Ready, aim, fire!’ I’ve been in France, Spain, Iceland, Azerbijan, I’ve been on aeroplanes, on the bus… it’s fantastic! I’ve got grey hair now but people still recognise me as the policeman from The Young Ones, too, as they watched it when they were kids. It doesn’t feel like it was that long ago.

Watch the show trailer below: