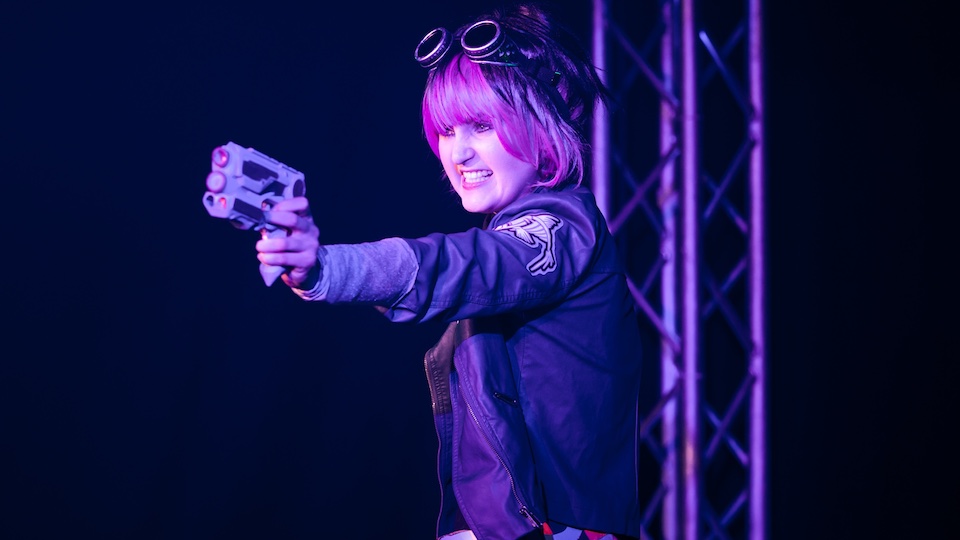 If you’re a Sci Fi fan, you’ll find something to love in Fanatical. If you’ve attended Sci Fi conventions, you’ll recognise something of yourself – and others – in the characters which have been lovingly and sympathetically portrayed in this two hour adventure with a ‘family’ comprised of geeks and misfits. It’s no longer as niche as it once was but, if you’ve never been into Sci Fi, but you like musicals, or are passionate about anything considered nerdy in its own way, there’s plenty of fun to be had in the heartwarming journey Fanatical takes you on.

Entering The Playground Theatre, your eye’s immediately drawn to the banners depicting the fictional world of Angel 8 and its celebrated writer Scott Furnish, and a video projection above a temporary metallic stage structure. It aims to give a flavour of the Angel 8 characters’ universe but the artwork and typography feels every bit an imitation. Presumably, it was a difficult design task to avoid allegations of copyright infringement from a likeness to genuine comic book heroes. It’s convincing enough to carry us through as fans excitedly arrive to attend a celebration of their favourite show, where they can be themselves with kindred spirits. They’ll travel across the galaxies, through the heart and soul of every fanboy and fangirl, all while located in a convention centre, somewhere in England.

We learn that the comic-book-turned TV show, Angel 8, follows a cargo ship under the command of fearless pilot Iris Aucht and 1,000 fans have arrived at Eight Con One, the first official convention of the cult TV show organised by superfan Trix (Suanne Braun (Stargate, Red Dwarf, Mamma Mia, Cabaret). Trix has been obsessed with the show since the days of dial-up modem, moderating a fan message board for Scott Furnish’s comic long before it was commissioned by the USA TV chiefs. Suanne Braun’s casting is a little stroke of genius, she knows both genres inside out, and is a regular guest star at conventions across the UK. Suanne holds real affection for Trix, and she absolutely nails the difficult off-beat spoken word numbers and brings much amusement during the cringeworthy ‘seductive’ solo ‘Make Sex At You’.

Writers Matt Board and Reina Hardy lampoon modern life with catchy songs such as ‘Spoiler Alert’ and the nostalgia-driven ‘When The Internet Was Young’. Direction is clear, given the small space the 8-strong cast are working with, and chemistry between them is palpable. They’re obviously having fun, and eagerly trying to share that with the audience. We do smile often, occasionally chuckle, and there’s subtle references to celebrated Sci Fi shows slipped into the script for die hard fans to nod smugly when they recognise them. Of course, the plot borrows inspiration from the one-series-wonder that was Joss Whedon’s Firefly.

The only problem is that this production is yet to feel complete. Much like the homemade models and cosplay (don’t say costume) outfits, there’s more work to be done to make a truly polished product. There’s perhaps one or two songs too many, and the love/crush triangle between nervy puppy-dog-eyed teen Baxter (Eddy Payne) and his attractive yet under-confident former babysitter Andra (Sophie Powles – Emmerdale’s Holly Barton), and the conniving undercover reporter Craig (Tim Rogers) drags out somewhat predictably. However, the heart of the characters buoys your spirits and the emotive You Should See Her Fly, Andra’s want song, shows off Sophie Powles’ vocal range. She’s certainly a long way from The Woolpack in Fanatical!

Although purposefully building tension, it really is frustrating awaiting the arrival of Scott Furnish, played by Brit comedy star Stephen Frost (Whose Line Is It Anyway?, Blackadder, Have I Got News For You). Natural funnyman Frost, towering above the rest of the cast, has a commanding stage presence yet somehow his shock announcement of Angel 8’s cancellation felt like he’d let go of an already partially deflated balloon, rather than the big bang into the interval they’re aiming for. Into act two, Furnish, angry that his show’s been cancelled, has arrived drunk and cantankerous. Improv aficionado Frost tries valiantly to pull laughs from the script that just aren’t there. His talent is somewhat wasted without enough lines to explore Furnish further.

With a shared love for musicals and Sci Fi, Matt Board and Reina Hardy collaborated across Skype to see Fanatical reach its current incarnation, and without a doubt, all the cast and crew are giving it their all. The plot culminates in the message that nothing and no-one can keep fans from their beloved story and I truly hope this is the case for Fanatical. With a few tweaks, and greater investment, this musical would deserve to fill a very niche gap in the West End.