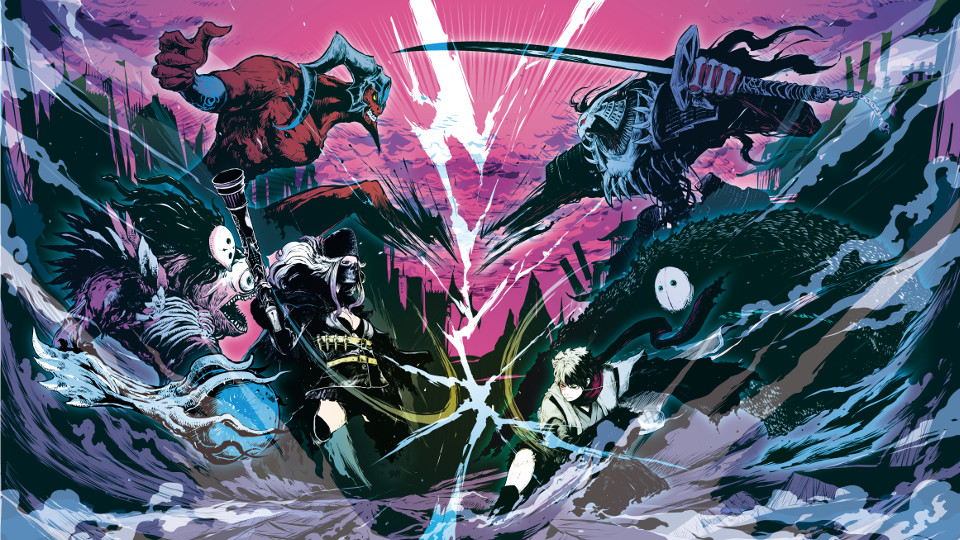 The MOBA genre is notoriously hard to get to grips with and even harder to master. To get your started, Dark Eclipse has an optional tutorial. It’s well worth a few minutes of your time and it teaches you the basics of the game and how to control the action. You can go back and replay the tutorial as many times as you want and I’d recommend at least a couple of runs through it. It’s only a basic tutorial though and you’re expected to work out the more complex parts of the game yourself.

Dark Eclipse requires a PSVR setup to play but the PS Move controllers and Camera are optional. If you don’t have these then you can play the game with a DualShock 4 controller instead. It’s great that the developers allowed both options but having tried both I’d urge players to make sure they have a PS Move setup.

The game is set in a dark fantasy world called Oldus. Battles are 1v1 and they begin by players taking turns to choose their 3 Leaders. You must pick one human character from a roster of Heroes and two demonic characters from the Dominators. Each Leader has their strengths and weaknesses. As you grow in experience it can be important to pay attention to who your opponent picks so you can choose suitable Leaders to counter.

Only a few Leaders are available to new players and the developers rotate those that are available. Through play you can earn in-game currency which can be spent on unlocking more or there’s the option to save time by spending your real cash on coin bundles. The developers are keen to stress that players can’t ‘pay to win’ and that they have tried to keep everything as balanced as possible.

When the game begins you view the battle arena from the viewpoint of a God overseeing the action. You can move the arena around and also raise or lower your viewpoint. You then interact with your Leaders using your disembodied hand (if you’re using a DualShock 4) or hands (if you’re using PS Move). The PS Move setup allows you to use both hands at the same time putting you at a slight advantage over someone using a DualShock 4. The controls are intuitive and work well no matter which input device you choose.

Players each have a base at opposite ends of the arena. This is where your Leaders initially spawn and also respawn if they get killed. Each leader spawns with a soldier minion that follows them around. Your first job is to get your Leaders off exploring the map and having their soldiers harvest resources from trees. These can then be used to build towers which extend your visibility across the map. Towers also earn quarks for upgrading your troops and provide defences against attacking enemies.

The arenas are also home to a variety of enemies known as Eaters. The small lower level ones are a minor annoyance but bigger Eaters are tougher to defeat. It’s essential to kill as many of the Eaters as possible as doing so allows you to level up your Leaders.

View some Dark Eclipse screenshots in our gallery:

There’s a variety of strategies on offer to you and it’s fun experimenting. For example you can choose to hang back and focus on upgrading your troops or push forward in different directions to claim as much territory as possible. You can’t see the enemy until they are in your line of sight or within range of one of your towers. A neat option is that you can use the trees to hide, allowing you to ambush the enemy or wait while they walk past.

Dark Eclipse is designed to be played online against others. Depending on your experience or how competitive you are as a player there are casual and ranked modes. Before you do jump online it’s well worth spending some time playing solo against AI opponents. Another great way to learn is to play online against friends.

My biggest concern for Dark Eclipse is similar to other free-to-play MOBA games. To really succeed it’s going to need a large player base. This is a tough ask of a new title and making a MOBA exclusive to PSVR really limits the size of the player base. Even now just weeks after launch it can be hard to find others to play against and it’s a real shame.

Dark Eclipse is a good game that does a great job of moving a MOBA game into VR. Fans of the MOBA genre are sure to get the most out of the game. New players should expect to put a decent amount of effort in to learn how to play. If you’ve already tried a few MOBA games and didn’t like them then you’re probably going to struggle to enjoy this one. However, it is free-to-play so maybe give it a chance and you might be surprised.

Dark Eclipse was reviewed using a digital code supplied by the publisher.