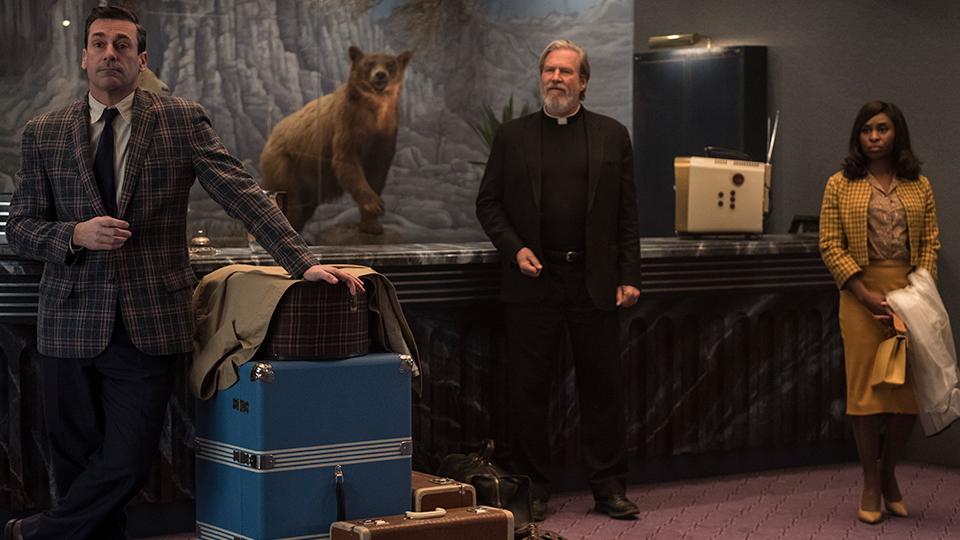 Lake Tahoe, 1959. A run-down hotel called the El Royale. A man is violently killed in the act of burying something beneath the floor of one of the rooms. Cut to 10 years later and Father Daniel Flynn (Jeff Bridges) and singer, Darlene Sweet (Cynthia Erivo) arrive in the lobby looking for a room for the night. Enter Jon Hamm, straight off the Mad Men set without so much as a wardrobe change, as stuffed-shirt vacuum cleaner salesman, Seymour ‘Laramie’ Sullivan.

Unable to resist the pull of his curiosity, Hamm’s character just can’t help but pry and quickly discovers a lot more than he bargained for about the El Royale, where neither Jeff Bridges’ recidivist priest, Dakota Johnson’s wayward vamp or Lewis Pullman’s milquetoast bellboy are even remotely what they seem. The hotel contains a multitude of secrets and the drip-feed of backstory about each character piles on the mystery. There appear to be at least two shadowy cabals pulling the strings behind-behind-the-scenes but this is unfortunately not quite as intriguing as the set-up initially lead me to suspect.

Producer, writer and director Drew Goddard’s previous foray into heavily-meta big screen real estate in Cabin in the Woods was a much more enjoyable experience than spending 2 hours 20 minutes in this (literally) god-forsaken place. There’s a few extraordinary plot holes and ‘hanging chads’ that never get resolved, a woefully underwritten denouement and the introduction of a new character in the third act – breakage of a cast-iron rule that just comes off to me as annoying here rather than as some kind of Hitchcock flourish.

What is refreshing to me is the backgrounding of Style rather than the kind of hyper-referential homage-o-mania that so many younger American male directors still seem to go in for. Tarantino he ain’t, nor is he trying to be, and it’s just as well that perhaps American cinema may be starting to move in a different direction.

If the film had any particularly vivid impression on me, it was in relief rather than in profile: is this unreconstructed male chauvinist world, where crooks, svengalis, crypto-religious cult leaders and sexist assholes rule the roost actually the Weinstein-era Hollywood behind the camera or simply the world of the film?

With Mad Men in mind (hard to avoid, really, with Hamm front-and-centre in a plaid sports coat) Bad Times at the El Royale struck me not so much as a noir-ish crime thriller set in the 60s as more of an attempt at a vaguely feminist western at the Great Western. I half expected a further breaking of the fourth (fifth?) wall to reveal that the cast are actually in some kind of period film-within-a-film and the unbending rules that are applied to the lives of the female characters are shown to be just as rigid in the modern ‘real’ world as in the 1960s of the film.

Goddard cut his fangs in television, in the Buffy the Vampire Slayer universe and as is the case with a great deal of Hollywood’s output in the current Golden Age of the box, seems to prefer the episodic, the drawn-out and the glacial over more cinematic concision and economy.

What elevates proceedings somewhat is the remarkable performance of British actress and musician Cynthia Erivo as a struggling doo-w0p backing singer. Bringing warmth and nuance to a script that has virtually none, Erivo’s scenes are really worth revelling in. She acts Hamm and Bridges right off the screen and delivers just about the only insight any of the characters display with a lightness of touch and dignity (and an incredible singing voice) that rescues the film.