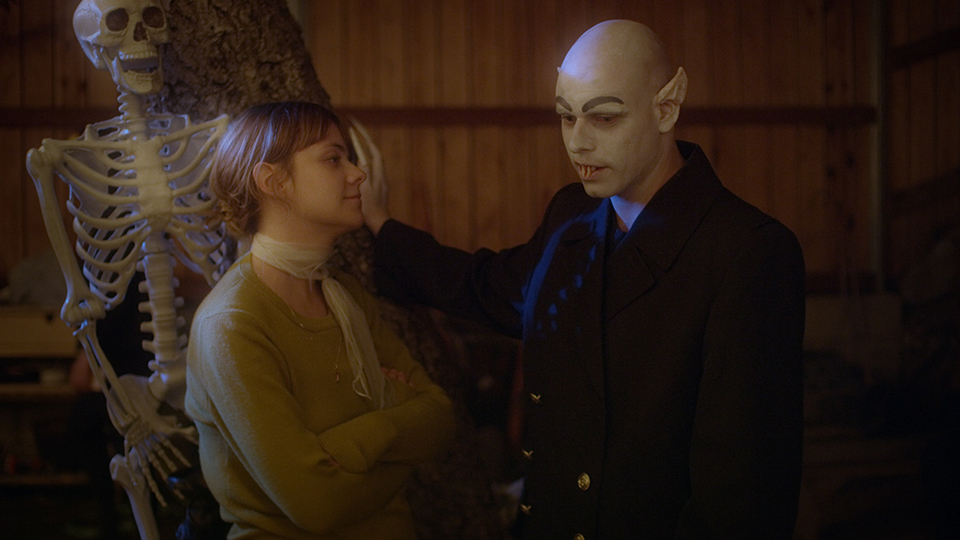 On the verge of a break-up, Eugene (Eugene Kotlyarenko) and Jane (Dasha Nekrasova) decide to try an open relationship while sharing their home in Los Angeles. Testing the waters of their independence, Eugene and Jane take a look at what’s going on around them in a bid to make connections with other people. Is their idea a wise one that will eventually bring them back together or will they realise that they need to call time on the relationship?

Wobble Palace is a refreshing original film from Eugene Kotlyarenko and Dasha Nekrasova, who play the central characters Eugene and Jane. An exploration of what it’s like to be a millennial in California, the film is part biting satire, part complete cringe-worthy car crash. You know you’re in for something different as soon as the film starts and you’re faced with an iPhone screen scrolling through an increasingly tragic exchange of messages between Eugene and Jane.

The film is essentially split into two parts. For the first half we follow Eugene as he embarks on his first day of freedom, something you’re not entirely convinced he wanted in the first place. He does what any millennial would do and jumps on iMessage and dating apps to try and organise a hook-up. His situation starts pretty bad and gets progressively worse. Fashioning his long hair into a man-bun that covers up his bald patch (I’m cringing just typing these words out), Eugene connects with photographer and blogger Caroline (Paige Elkington). Thinking she’s into him, he stupidly strips naked and poses for a racy photoshoot before Caroline leaves him high and dry and dashes out the door to use her photos to humiliate him.

Jane doesn’t fare a whole lot better partaking in a Playbuzz quiz to find out if she’s ‘basic’ or not. You can guess the outcome of that one without seeing the film. She, like Eugene, tries to make connections with people and while she does get a lot further than her boyfriend, she doesn’t find the fulfilment she’s looking for either. The time she spends away from Eugene makes Jane look at her life choices too in an attempt to figure out what she actually wants. Whether or not she gets to any conclusion, you’ll have to watch the film and find out.

What Wobble Palace captures so eloquently is the ever-growing reliance, particular of millennials, on technology. Both Eugene and Jane live their lives via their smartphones. Neither of them is parted with it for more than a few seconds and in one fantastic scene Eugene goes on an epic meltdown when a woman messages him and he doesn’t get an instant response to his reply. It made me feel incredibly sad for where we’ve come to as a society but it also had me laughing as the only thing worse than seeing the speech bubble appear then disappear, is getting no response at all.

Kotlyarenko and Nekrasova have to be commended for their fearless approach to this film. They throw themselves into their roles with gusto and Kotlyarenko in particular leaves nothing to the imagination (at all). He’s all in with his role and somehow makes you care about Eugene despite him being a socially-inept, phone-addicted buffoon. Nekrasova makes sure that Jane is as cold and unlikeable as possible, and of the two of them she’s the one that will really make you see red.

Wobble Palace is very clever. The split-screen approach showing the screens of the character’s phones is a stroke of genius and it tells the story of Eugene and Jane in a very interesting and engaging way. You won’t really like either of these characters but that’s fine. The fun comes in watching them get gradually worse while dealing with situations that aren’t as life or death as millennials would like you to think they are. In many ways it’s a sad glimpse into the future of the younger generation and it’s damn scary.