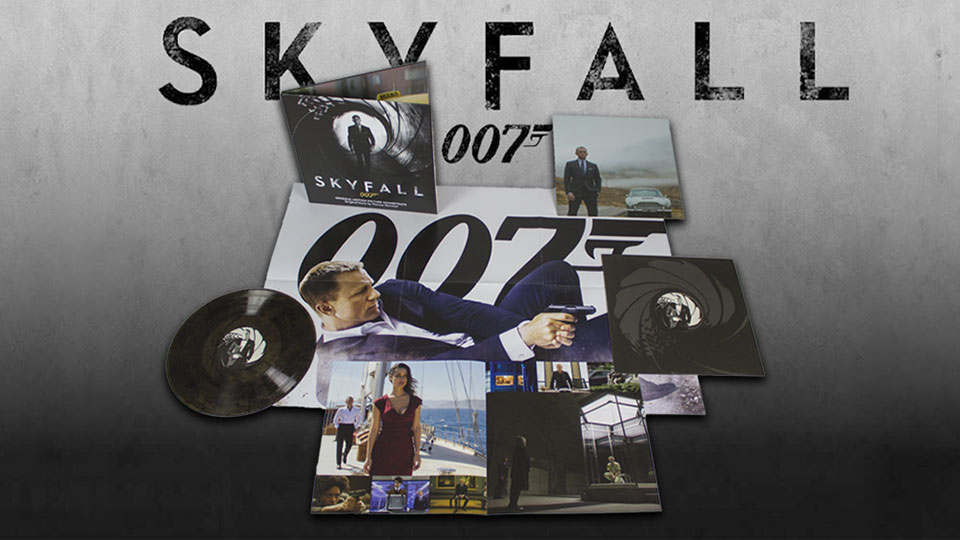 The double vinyl limited edition release of the original motion picture soundtrack to the James Bond movie Skyfall is a thing of beauty and of fine detail. Collectors will be impressed that everything possible has been thrown at this product. The gatefold sleeve has a full-colour photograph of Daniel Craig on a motorbike on the inside cover. Both 180 gram vinyls are housed in slip cases, one depicting Bond in Dalton-esque pose, levelling a gun, and the other is the very familiar publicity shot of Daniel Craig in the Scottish mist, beside his beloved Aston Martin. Each has a hole on one side so that the picture of Bond at the centre of the vinyls is visible.

The records themselves are moulded from a semi-translucent metallic grey, reminiscent of gunsmoke, at the ideal 180 gram weight. A few extras have been thrown in. One is a poster of Craig as Bond, six times the size of the record sleeve, plus a four-page booklet which has glossy colour pictures from the film and a full list of credits on the reverse. In terms of raw packaging appeal – Skyfall is perfect.

A downside for some fans may be that Adele’s title track isn’t included in the music for this release. What you have are thirty tracks composed by Thomas Newman as incidental music for the movie. It’s hard to underestimate the importance of music to the effect of a film in establishing mood and manipulating an emotional response in the audience. Over the years, some movie scores have become cultural phenomena and amongst the most famous melodies ever written. Thomas Newman comes from a dynasty of Hollywood movie composers, and has worked on extremely well-known titles since the 1980s, though Skyfall is his James Bond debut (he would go on to write for Spectre as well). That may be surprising, because his first Bond score is clearly in the tradition of the earlier movies.

Thomas Newman retains the bombast and spirit of adventure of the musical tropes of the movie franchise established principally by John Barry and David Arnold. From the opening blast of brass, Grand Bazaar, Istanbul establishes a Bond outing, and the Eastern motifs, pace and percussion create the excitement and sense of place. It’s not all high-octane stuff, but representative of a range of moods. There is a sombre change of pace for Voluntary Retirement. Close Shave is the romantic yet playful side of Bond. Skyfall has an ethereal beauty that conjures images of the Scottish mists. She’s Mine has the iconic Monty Norman riff. Deep Waters suggests terror and menace, whilst Mother is quietly cathartic. For the most part, Skyfall evokes thrills and spills, represented by tracks like the blistering Welcome to Scotland, which builds the drama from an eerie opening through a sense of creeping danger. It’s a terrific piece of work that earned Newman a BAFTA and an Academy Award nomination (rare for a Bond movie – only 1977’s The Spy Who Loved Me previously earned that privilege).

The sound quality, as you might expect from vinyl of this quality, is excellent. Listening to a musical score in isolation is a fantastic way of seeing a movie you love in a new light. James Bond has massive appeal, and Newman’s music creates a visceral response in the listener. It’s hard not to be sucked in. Expect the adrenaline to pump and the hairs on the neck to stand up. For aficionados of the secret agent’s big screen adventures, this limited edition vinyl release of the Skyfall soundtrack is a must-have, and will look magnificent as part of any collection.