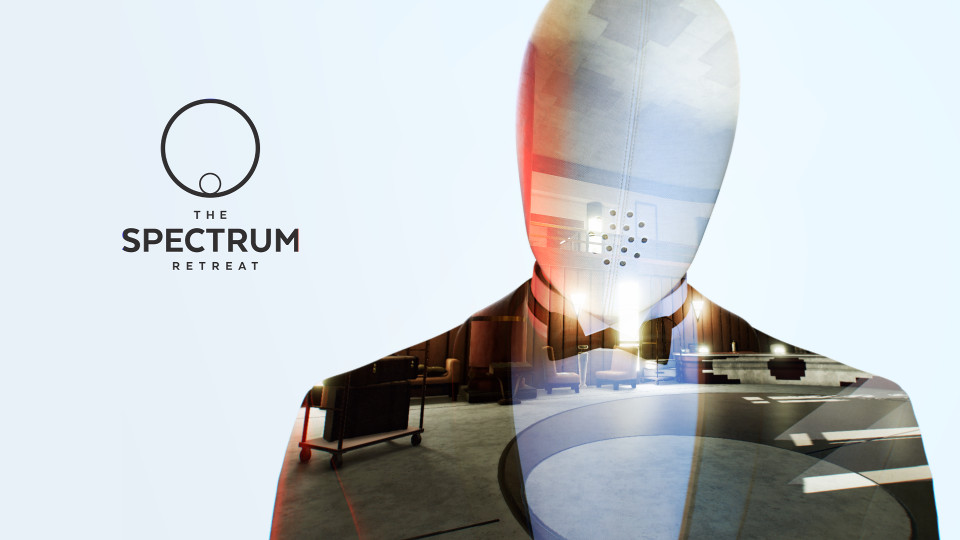 Picture The Bourne Identity melded with Groundhog Day and set it in a hotel staffed by polite but faceless men in tuxedos. You’ve got The Spectrum Retreat which has now been released on Switch.

You awake in a hotel controlled by an Artificial Intelligence with no memory of how you came to be there but knowing only one thing for certain, you have to escape. Here begins the fun. The Spectrum Retreat takes a first person view as you wander the halls of this vast hotel attempting to solve puzzles to make your way from the bottom to the top and ultimately to freedom. I was a touch surprised by this direction as I would assume that you’d want to get to the front door to escape but this was explained in the game’s narrative of which which I will try not to give too much away.

You awake at the beginning of the game in hotel room at The Penrose, a nice hotel room I must admit, being awoken by a knocking at the door. There we are greeted by the manager, a strange, faceless entity in a tuxedo who speaks with a British accent in a notably eerie and robotic manner. He informs you that you have requested a wakeup call and should proceed down for breakfast. It is at this moment that you first become aware that the hotel itself is utterly deserted. No staff with faces, no guests, nobody but you and the mannequins are in this place. Before long things take a sinister twist, there is something foreboding about this hotel, something that just feels…off. There are strange stains on the floor, there is an atmosphere in the place that is entirely separate from but accentuated by the lack of other guests. Once we sit down to eat we find a communications device where a panicked sounding lady named Cooper makes contact. She will remain with the player throughout the story in the form of a voice at the end of a phone line. She notes that the player is being held in the hotel against their will and she is going to help us escape. She’s great.

Watch the launch trailer for The Spectrum Retreat below:

I should begin by talking about the visuals here. The game really has two distinct visual styles. The first is the vibrant realism of the hotel itself, here you’ll find all the trappings of a modern five star hotel, it looks and feels authentic but at the same time, the way in which the hotel is constructed can become disorientating. It reminds me of a time when I got lost in a hotel on holiday. Of course in that instance there were people around to point me in the right direction. Then you get the puzzle stages. The puzzles in The Spectrum Retreat are based on colours which really does make this an accessible game all ways around. They are enjoyable to look at and solve but of course that comes with a caveat; they can be absolutely brutal. You make your way through different chambers by solving the puzzles and thus make your way up to the roof. I had seen gameplay videos of the game on other platforms but of course I was playing on Switch and I am delighted to say that the game has lost none of its vibrancy, atmosphere nor quality in the transition. In fact, I feel as though this is a more absorbing game on a handheld system, particularly since I found myself literally moving the screen around as I turned the corners in the hotel. I will also add here that when I say ‘accessible’ I really mean it, The Spectrum Retreat has an amazing consideration of diversity with modes to make it so that people with colour blindness or other optical conditions that affect colour perception can enjoy the game and solve the puzzles as well. This was a great touch.

The game does have a story and I am not going to give much of it away, only because it is such a deceptively deep, engaging and emotive game that to try to describe it would be to do it an injustice and would ruin the experience for other players. Suffice it to say that when I began the game I was moderately curious about what was going on, as I played more I was drawn in to the world, the suspense and the characters and by the end I was drained, completely drained, but satisfied. Interestingly, a lot of the story is not actually fed to you in the usual manner, instead you piece together a lot of the background by reading bits of newspapers, seeing blurred photographs and generally investigating the hotel. I have heard many people say that once they understood the mechanics of the hotel they began to lose interest, I don’t know whether this is something that has been changed in the Switch version (I doubt that) but personally I felt as though once I understood the way it worked and its point it only served to increase my enjoyment as the game built to its ultimate conclusion.

View some screenshots from The Spectrum Retreat in our gallery:

The control is excellent and the first person perspective serves only to really put the player in the situation; it genuinely feels as though you are the one who needs to get out of this place, it engages you in a way that a third person, over the shoulder or even a point and click style never could. Naively, when I first picked up the game I kept waiting for a gun to appear as an actionable item since there is a circle style crosshair present in the centre of the screen at all times, thankfully this did not turn up and serves as your aim for action, point the crosshair on an item and then begin your investigation.

I am sure that many people will have negative things to say about certain aspects of The Spectrum Retreat; yes the graphics sometimes go a touch fuzzy on the lights and at the edge of the screen, yes the mannequins could have been more individualised or even more sinister and yes it could have been a longer game, but ultimately, I really enjoyed my stay at The Penrose. I’d recommend this to anyone who enjoys a puzzle style game with genuine intrigue and human interest stories. It’s sinister, it’s unsettling, it’s challenging and it’s brilliant.

The Spectrum Retreat was reviewed using a digital code supplied by the publisher.

Advertisement. Scroll to continue reading.
In this article:Nintendo Switch, PS4, The Spectrum Retreat, Xbox One