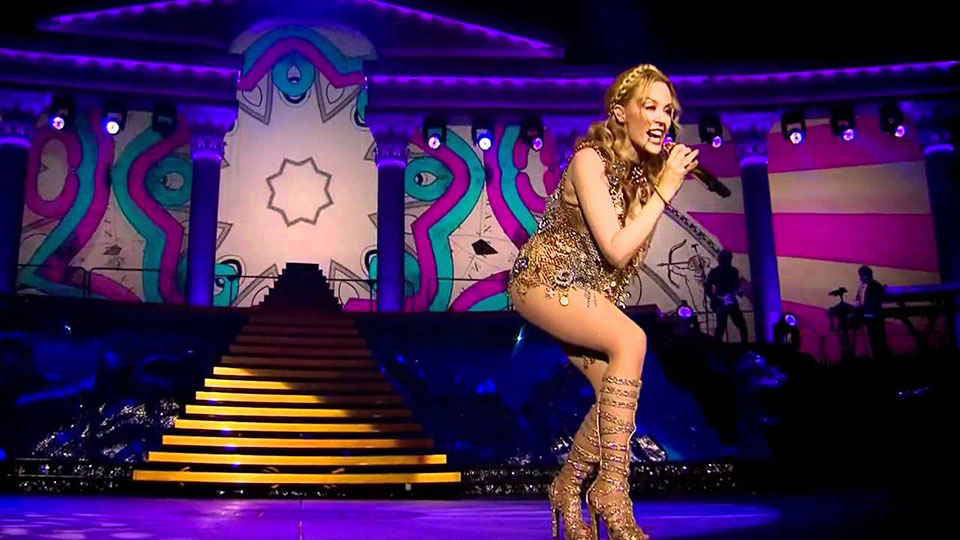 Kylie Minogue has been on the road the past few weeks on her Golden Tour and she’s been picking up plenty of critical acclaim.

With a set list that combines classic hits with new tracks from Golden, the star’s latest number one album, the Golden Tour has been a huge success. Did anyone really doubt that Kylie would put on a stellar show?

A month ago we asked you to choose your favourite Kylie tour from the many she’s done over the years. It wasn’t an easy choice but readers voted in their hundreds and there was a clear winner.

Keeping reading to find out which tours made the Top 5…

In 2012 Kylie did away with the huge production and performed a series of intimate shows. She also threw her biggest hits out the window and sung a set list of album and rarely performed tracks. It was a huge hit with fans, many of whom had waited years to hear their favourite non-single tracks live.

We thought this one would have ranked a little higher. Showgirl was one of Kylie’s most adventurous tours but the cloud of the star’s cancer battle, which led her to cancel a series of shows, hangs over it. She did return with Showgirl: The Homecoming Tour in 2006 and 2007 and fans adored it.

Kylie was back to her chart-topping best at this time with her album Fever riding high and Can’t Get You Out Of My Head going on to be one of her biggest hits. Fever was a celebration of Kylie’s past and her present, and it was an incredible live show.

We’re a little surprised this one is so high. Kylie went all futuristic for this tour in support of her X album. The set list concentrated mostly on the albums Light Years, Fever and X with very few classic hits in the mix.

It’s our favourite Kylie tour so we’re not surprised Aphrodite: Les Folies Tour came out on top. With the biggest production, incredible costumes, a huge stage and an ancient Greek theme, the show was perfect. The set list had everything you’d want and more, and Kylie was on top form.