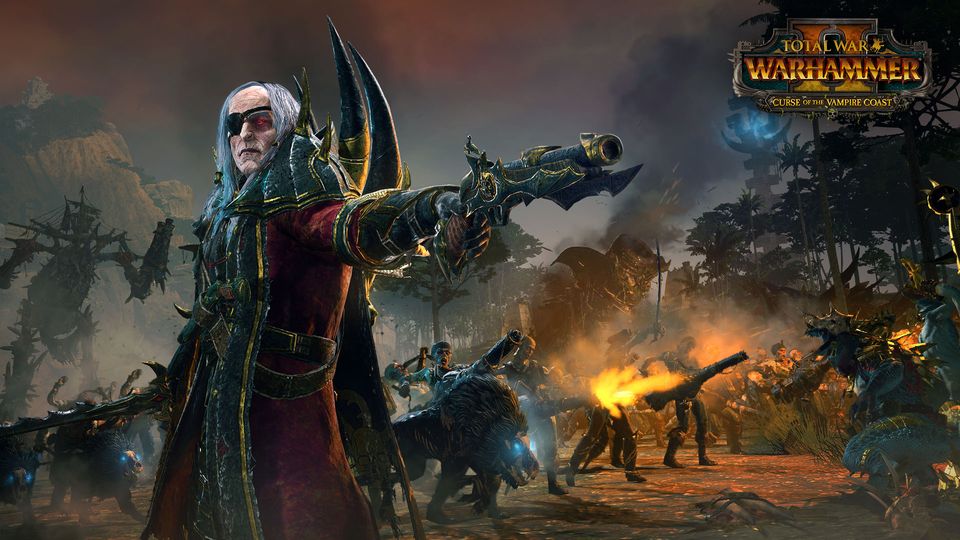 Curse of the Vampire Coast is the latest DLC for Total War Warhammer 2 and will be released on 8th November, it is available for pre-order on Steam right now.

As you can probably guess from the name this new DLC puts you in control of a Vampire faction but these guys appear to be a bit different from the vampires you may have already seen in TWWH2. The plot has you sailing the seas in search of the Star Metal Harpoon “ a weapon powerful enough to bring the greatest Merwyrm of them all to heel! “ in order to bend the Merwyrm Amanar to your will. You will be competing against other vampire captains who are all after the same thing.

You can check out the Curse of the Vampire Coast DLC launch trailer below:

Infamy is your route to success and this is gained by winning battles, taking territory and establishing Pirate coves. The naval focus continues with loads of ship upgrades which seem to act as mobile settlements. These guys aren’t restricted to their ships mind and can attack and occupy land settlements in the same way as other factions.

You will also find yourself in search of pieces of 8 scattered around the world which once obtained will unlock a regiment of renown. Added to this are treasure hunts, if you can solve the riddles on the treasure maps this booty will be yours for the taking.

The Vampire coast also brings unique rites, new battlefields and a whole new unit roster which is still to be announced. Looking at the trailers however the new army looks to be pistol heavy as you would expect from pirates, there is a giant skeletal construct that looks galf skeleton and half ship and lets not forget those crabs, giant ones scuttling all over the place looking to disembowel their enemies.

I already love TWWH2 and absolutely cannot wait for this latest edition!

Check out our screenshot gallery:

Check out the Steam page here.