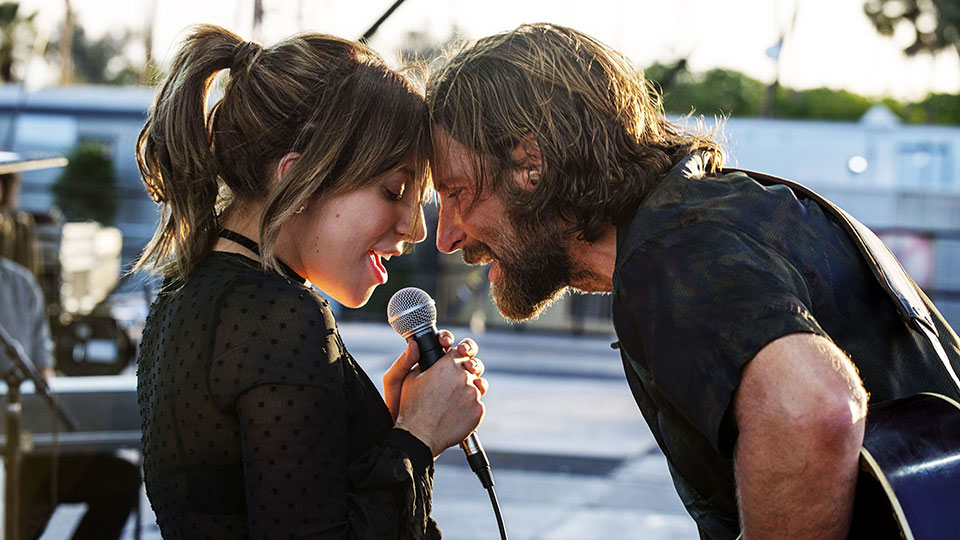 Superstar musician Jackson Maine (Bradley Cooper) makes an unscheduled stop at a drag bar following a concert performance while looking for a place to drink. Taking in the entertainment, and the alcohol, Jackson meets struggling singer Ally (Lady Gaga) who dreams of making it big. After spending the evening getting to know each other, Jackson and Ally quickly fall for one another and Jackson starts opening doors for Ally’s career to take off. As Ally’s star rises, it impacts on their relationship and Jackson’s demons threaten to bring both of their world’s crashing down.

The buzz around A Star is Born has been pretty deafening ahead of its arrival in cinemas. The performances of both Lady Gaga and Bradley Cooper have been acclaimed and there’s plenty of Oscar talk. The film is based on the 1937 film of the same name and it’s actually the third remake following 1954’s Judy Garland and James Mason version and the popular 1976 remake with Barbra Streisand and Kris Kristofferson. A Star is Born was stuck in development hell for years with Clint Eastwood originally set to direct and Beyoncé attached as the star.

The story is a well-trodden one and even if you haven’t seen any of the other versions, you know that you’re in for a rocky ride. Ally and Jackson’s hedonistic and carefree love affair doesn’t last for too long and all the signs of what’s to come are planted early. Ally has insecurities and struggles to find her own voice in music while Jackson has a drink and drug problem that is on the cusp of spiralling out of order. Together they keep each other on the straight and narrow but the quick rise of Ally’s career gives way to jealousy and arguments.

Cooper takes on roles in front of and behind the camera on A Star is Born. As well as starring in it he also directs, co-wrote the screenplay and produced the film. Notably this is his first time directing and he does a stellar job. He perfectly hangs the story around the magnificent music that runs through the film and he really draws you into Jackson and Ally’s relationship. His performance is pretty remarkable too and his speaking voice almost unrecognisable.

The real revelation here though is Lady Gaga. I didn’t love her in American Horror Story: Hotel and I was dubious that she could carry a film but under the direction of Cooper she pulls off a terrific performance. Not only does she have great chemistry with Cooper, she also showcases an impressive range and excels during the film’s more emotional moments.

One of the film’s biggest strengths is the music. You never go too long without a song popping up and Cooper is convincing as a seasoned Country singer (who knew he could sing?). We all know that Lady Gaga has a phenomenal voice and she manages to surprise, taking her voice to levels and places I’ve not heard before. She sings from the gut and at times her performances are gut-wrenching.

A Star is Born is a triumph for all involved. It packs a much more powerful punch than I was expecting and it takes you through a rollercoaster of emotions. The only real criticism I have is that it was a little overly long at 135 minutes but that really is a minor gripe. The awards buzz around the movie is absolutely justified and both Cooper and Gaga give career-defining performances. The music will likely take on a life of its own outside of the film too so don’t be surprised if it follows the lead of The Greatest Showman’s soundtrack. A Star is Born is a fantastic film that makes you feel every emotion and will leave you thinking about it long after the credits roll.