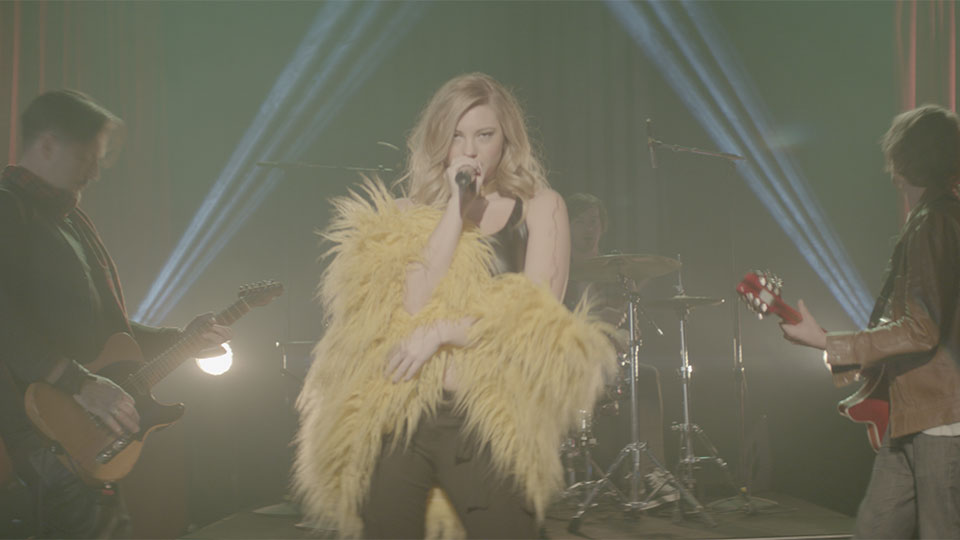 Talented but shy singer Rachel (Allie Gonino) meets faded rock star Jimmy (David Arquette) and promising musician Scott (Ryan Donowho) at a party and after showing off her impressive voice, she’s recruited to join their band. Jimmy makes a deal with shady record label executive Rick (Luke Wilson) to get the band out on tour but on their first night, Rachel suffers stage fright and runs off stage. Her pushy mother Barb (Perrey Reeves) picks her up but as the two are leaving the venue, lightning strikes the car and kills them both. At the hospital Rachel inexplicably comes back to life and she’s full of confidence and the hunger to be a star.

Hollow Body (known as High Voltage in the US) has a hokey premise but somehow it manages to work it pretty well. The film starts off strong as it establishes the characters, and shows off Allie Gonino’s fantastic vocals. It teases what’s to come as Rachel gets intimate in a toilet cubicle with a young guy who winds up dead. The story jumps back in time to unravel how things got to that point and if you can put logic to one side for 90 minutes, you’ll find there’s actually plenty to enjoy here.

The film really kicks things up a gear once Rachel comes back from the dead but it’s also the point where the wheels start to come off slightly. The story progresses quickly, often trying to pack in too much and leaving you a little confused as to how much time has passed between scenes. I get that writer/director Alex Keledjian is trying to give the audience as much as possible but it makes the film feel a little over-stuffed. I would have preferred less going on and a proper focus on the main elements of the story.

The star of the film is without a doubt Allie Gonino. David Arquette and Luke Wilson may be the ‘names’ but it’s Gonino who carries the film. Since discovering her in The Lying Game and enjoying the music of her band The Good Mad, I’ve kept an eye on Gonino’s career and she’s fantastic here. The transformation from the shy Rachel we see at the start of the film to the vamped-up sex kitten frontwoman that emerges during the second half is remarkable. She also possesses some serious pipes and she sings here in ways I’ve never heard her sing before.

Arquette is fun to watch too. Perhaps best-known for the Scream franchise, he hasn’t ever really been able to capitalise his success in those films to establish himself as a leading man. He is however a very reliable actor and he can make even the corniest of dialogue work. Arquette also has a real charm and he’s perfect as washed-up rocker Jimmy.

Hollow Body may have a plot that’s way too busy it’s still enjoyable to watch. The music is superb and Allie Gonino is someone we should all be keeping an eye on. The film doesn’t take itself too seriously and you do have to abandon logic to fully appreciate it. I’d say grab some popcorn, turn your brain off and just go for the ride. You might find that you enjoy this surprising, but flawed, little gem.

Hollow Body is being released as High Voltage in the US. It will have a limited release in US cinemas and a digital release on 19th October 2018. A DVD and Blu-ray release will follow on 20th November 2018.