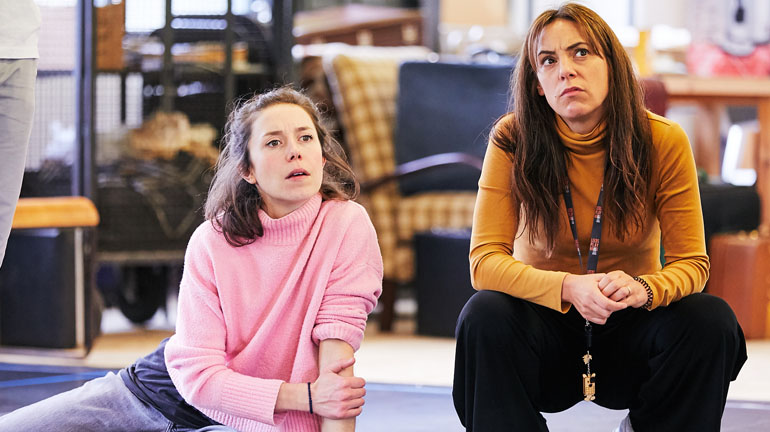 Leeds Playhouse has released images of their Ensemble Company in rehearsal for David Greig’s Europe – the bold 1994 drama which interrogates one’s sense of belonging to a continent.

Two newcomers, Sava and Katia, arrive in a new town seeking shelter and safety, but the locals are divided as to whether they’re allies or enemies. Exploring the collision of locals and ‘foreigners’, the play promises to be a funny and political exploration of migration and economic abandonment.

Joe Alessi and Dan Parr in rehearsal for Europe. Credit: The Other Richard.

The production is directed by Leeds Playhouse Artistic Director James Brining: “It’s a play written nearly 25 years ago which feels more timely and articulate than ever. I love finding plays which though written in a different time speak to us powerfully in the here and now.”

“I like the fact that the play has an almost beckettian atmosphere. The abstracted nature of the space helps the play resonate across more time and space than a more literal rendering would. So at times I’m reminded of Godot and the existential crisis that play explores. Amanda’s [Stoodley] design isn’t as pared back as that play but it is more of an environment than a reorientation if a railway station. We are responding to the found space nature of the workshop and the temporary feel of the space. Hopefully it’s a perfect marriage of environment and content.”

Lladel Bryant in rehearsal for Europe. Credit: The Other Richard.

Presented in association with SOYO Leeds, Europe is the second production in Leeds Playhouse’s Pop-Up theatre and follows the Ensemble’s acclaimed September debut in Road.