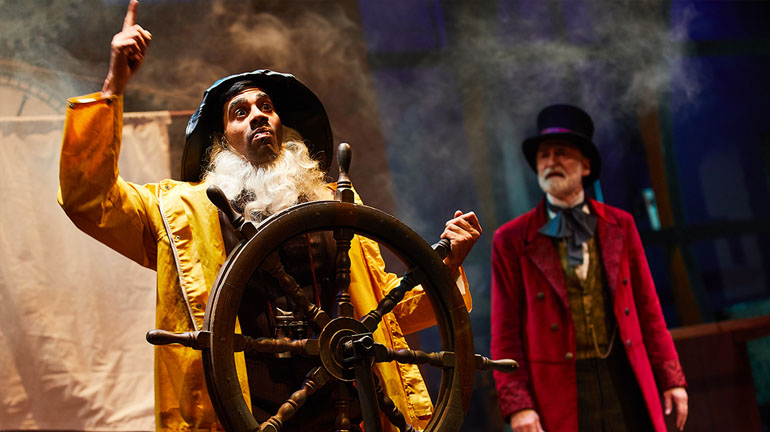 Darren Kuppan and Robert Pickavance in Around the World in 80 Days. Credit David Lindsay

As Leeds Playhouse’s programme draws to a close in the pop-up theatre, their penultimate production in the space offers a family-friendly retelling of Jules Verne’s globetrotting adventure.

Toby Hulse’s busy adaptation is a post-modern interpretation of the novel, providing something of a metaplay as Jules Verne features as an audience member to interrogate the cast over the reworking of his book. It’s a fresh take on what could have been a point-to-point retelling, offering a level of satire on the process of writing and theatre-making.

But despite this high-level concept, the show is mostly geared towards a broad family audience. Alexander Ferris’ direction dials up the physical comedy and audience engagement to give the show a pantomime feel, whilst an innovative use of props and quickly-paced scenes ensures the journey moves along at a clip for younger audiences. Quite literally, there’s no standing around in this fast-moving knockabout comedy.

The Playhouse ensemble company has been divided into two production units for the last shows of the Pop-up season, resulting in 80 Days being an all-male cast ahead of the all-female production of Be My Baby later this Spring. Over the past year, the company has grown like an old-fashioned repertory family and the men are clearly intent on ending their run on an upbeat high.

Robert Pickavance’s Phileas Fogg is charmingly scatty and airy, channeling some of the redeemed Scrooge we enjoyed last Christmas. It’s a very professorial portrayal, with popular influences of Jeremy Brett’s Sherlock Holmes and Back to the Future’s Dr. Emmett Brown in the mix. Mr Pickavance for the next Doctor Who, please?

Darren Kuppan and Joe Alessi bounce off one another in a sparring double act as Passepartout and Fix of the Yard, whilst also handing over a legion of supporting characters with purposefully anachronistic regional accents.

Kuppan is remarkably sprightly and leaps like a dancer throughout much of the show, whilst Alessi’s razor-sharp timing and self-aware twinkle helps invite the audience into the fun. Complex routines involving costume changes and rapid drinking have been brilliantly honed between them, and are undoubtedly highlights of the show.

Dan Parr’s warm interpretation of Jules Verne is bound to delight the kids in its childlike honesty and energy, whilst also bringing an unexpected dimension to a traditional tale. His surprise switch into another character is also hilariously camp in the pantomime tradition.

Kudos to the Playhouse for pushing out an all-male comedy, which immediately presents tricky strictures to adapt and overcome. There’s always something very interesting in a single-sex dynamic and Around The World in 80 Days really plays on that in a fun and gentle way.

One minor caveat is that much of the performance is catered for audiences end-on and centre to the stage, so unless you want to glimpse a few of the backstage shenanigans (which provides something of a fascinating dumbshow itself), ensure you secure reasonably front-on seats.

Around the World in 80 Days is a frantic, fun-filled caper in the old pantomime tradition with a bit of music hall fanfare to boot. Providing plenty of practical gags with a perfect balance of whimsy and adventure, it’s an ideal family show and an inspiring example of what you can do with a small cast and a box of tricks. Be sure to join their journey.