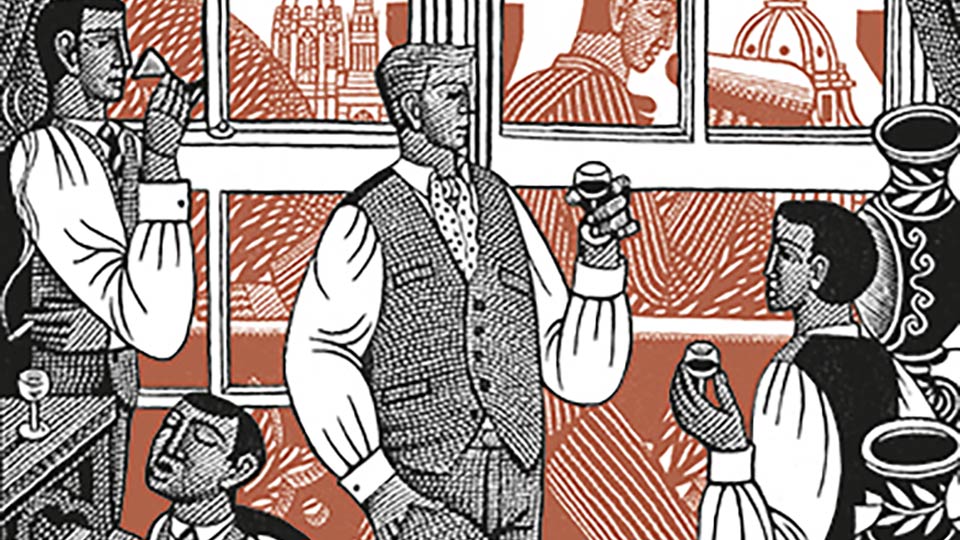 Brideshead Revisited – the story of the aristocratic English Marchmain family reflected upon by a world- and war-weary outsider, Charles Ryder, is probably Evelyn Waugh’s most-celebrated and best-remembered novel.

The book first entranced readers at the end of the Second World War. It looked back over a period that was vanishing – where gentry owned vast swathes of land, and enjoyed the privileges of wealth and titles, when dropping the family name was sufficient to secure a place at Oxford. Time flits back and forth between the ‘present’, the mid-1940s, in a world torn apart by conflict, and the period from the 1920s, from the moment narrator Charles Ryder heads to university for an encounter that will change his life.

Few novels have so brilliantly encapsulated periods of life as Brideshead Revisited. For many, their student years are looked back upon with great fondness as hedonistic and boozy, and a time when great friendships were forged. Charles Ryder’s are no different. He soon ditches the studious friends he makes in his early weeks for the captivating and beautiful Sebastian Flyte, who carries his teddy bear Aloysius around with him, hangs out with a group of catty (mostly) homosexuals, and abandons the pursuit of academia for prowess in the consumption of liquor. Ryder is intoxicated, in more ways than one, but as he grows closer to Sebastian, and meets members of his family during visits to their home, Brideshead, he learns that there is a spreading darkness and a sadness within his friend that he is powerless to arrest.

“Sebastian is in love with his own childhood. That will make him very unhappy,” the observant Clara, Lord Marchmain’s mistress, points out during their seemingly idyllic trip to Venice to see Sebastian’s father. “When people hate with all that energy, it is something in themselves they are hating.” For such an incidental character, Clara speaks with great wisdom and truth, and is sketched economically, with skill and clarity, embodying the dignity of a woman who accepts her lot in life. The novel is full of such brilliant literary creations – from the boorish Boy Mulcaster to the philistine Rex Mottram and Sebastian’s witty younger sister Cordelia, all of the characters, even when serving to make a satirical point on the author’s behalf (divorcee Mottram asks how much a blessing from the pope to remarry would cost – his answer to any problem to throw money at it) ring true and pepper the novel with a memorable supporting cast. Few novels contain quite such a menagerie of unforgettable characters.

Reviewing the book was a revisitation for me, who was first enthralled by the wealthy world of Charles and Sebastian whilst at university, albeit a colder, bleaker and vastly poorer experience than the one Ryder enjoys. Returning to it at Charles’ age as he narrates, looking back with maturity on his youth now gone, I find I retain the same affection for the book as I had two decades earlier, but see it differently, and perhaps closer to how Waugh had intended. Back then, I longed for Sebastian to be reunited with Charles. The second half of the story I found a tad austere. I was resentful of the intrusion of Julia, Sebastian’s sister, and found a touch incredible her romantic entanglement with Ryder. (“He has a penchant for my children,” Lord Marchmain wryly observes.) But now I see that Charles’ increasing maturity is so clearly signposted as he grows older and more serious. The antagonism between agnosticism and religion is much more evenly balanced than I had remembered, and reflective of Waugh’s increasing comfort in Catholicism in his older age. It makes it even more impressive that it’s the agnostic Charles who tells the story of the troubled yet very Catholic Marchmain family.

Critics of Waugh’s say that it’s universally good that the world he evokes with purity of nostalgia is now gone. Is it really, though? Haven’t we simply replaced one aristocracy for another? A quick glimpse at the great and the good assembled at the recent Royal Wedding reveals a former football player, disgruntled to have never received a knighthood, and collected pop stars and actors taking seats that would, a century earlier, have been reserved for Lords, Ladies and Bishops. More startlingly still, an attitude that the working classes should do as they are told and have no democratic say in the future of their country is now commonplace, and held not by pre-World War One aristocrats, but by the middle classes, making Waugh’s era seem positively liberal by comparison. Reflections on social change are impossible to avoid when reading Waugh. He holds up a mirror, and in our own time reveals that class is never as much of a motivator as jealousy of the wealthy.

I loved the book even more a second time. Brideshead Revisited is rightly lauded as one of the best English novels of the Twentieth Century. At times poignant and achingly wistful, at others laugh-out-loud funny, it remains, to readers facing rapid societal changes of a different sort, entirely relevant and as crisp and compelling as the day Waugh placed the final full stop.

This hardback edition from The Folio Society is sumptuously illustrated by Harry Brockway in 1920s Art Deco style woodcuts. The front cover depicts Charles and Sebastian enjoying cigarettes and Chateau Peyraguey, Brideshead nestled in the hills behind them, and there are six further full-page pictures from key moments in the text. It also features an introduction from author and columnist AN Wilson.

The Folio Society edition of Brideshead Revisited by Evelyn Waugh, introduced by A.N. Wilson and illustrated by Harry Brockway is available exclusively from The Folio Society.