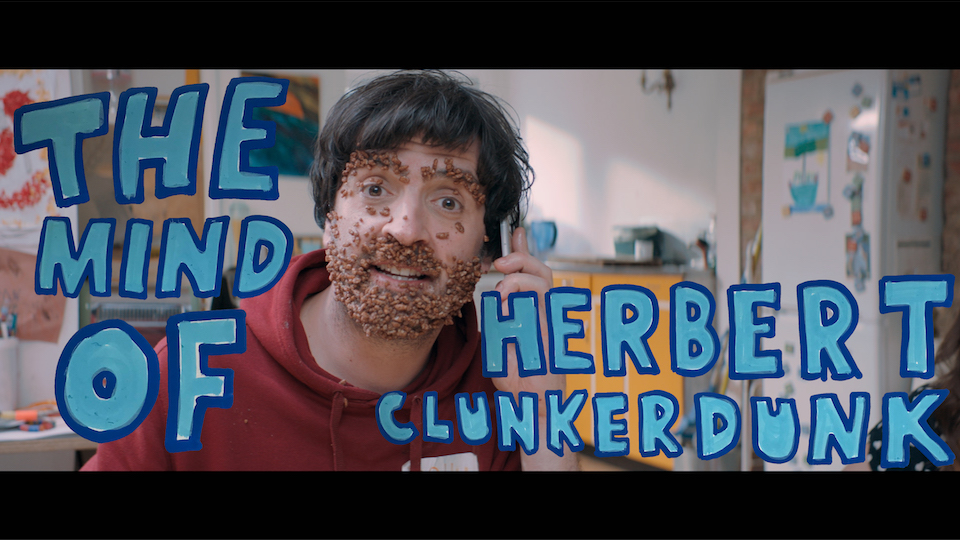 The Mind Of Herbert Clunkerdunk sees Herbert get a big audition for a film. It’s his big chance to finally break out, he’s got to learn his line (yes, singular), but, the problem is, he’s constantly interrupted by his own imagination.

I recently caught up with Spencer Jones to discuss his BBC work, his journey into comedy and how children can be your harshest critics…

Spencer, The Mind of Herbert Clunkerdunk was born out of your 2017 Edinburgh Comedy award nominated show The Audition. Tell us a little bit about it?

I wanted to try and find a way of taking what I do on stage and making it palatable and fun for telly. A lot of the time when I’m on stage it’s very audience focused so I decided for the telly it should be all down the lens. Performed to the viewer, a little bit like how Miranda or Fleabag do their little asides to camera but with Herbert, every now and again he’s got to deal with reality around him. That was a starting point to see if that was a way of keeping the viewer interested. Obviously we had to have a story around it. I based it loosely around my Edinburgh show as when I wrote that I’d half an eye on it working for telly. The short features visual silly stuff based around my home, we shot it in my actual house because I’d planned it in there, all the bits and pieces were ready.

Yes, you use a lot of props in your comedy.

That’s right, every day objects. Sometimes I make weird stuff that’s completely out there. There’s a talking mop. I had an idea for a talking door, too. You know when you’re leaving the house and you have a thought about maybe what you’re wearing or have you got your keys? I thought, ‘What if the door could be your conscience for a moment? It might be quite fun if the door talks to you’. The idea behind The Mind of Herbert Clunkerdunk is that he’s in the real world but we can see his imagination. He gets sidetracked from the real world by his flights of fancy.

How did you get into stand up comedy?

I started when I was 16 or 17. I was in a double act with a mate called Shane, his name was Marks, so we had a double act; Marks and Spencer. We did our first gig, the crowd loved it. Second gig, there was a heckler, but we got away with it. Third gig. I got asked to do our 6th Form end of term party. The disco started and then, at 9pm, on I walk when everyone’s trying to kiss each other and dance and get stuck into the booze. Then I turn up with some whimsical comedy. I got booed off stage by 40 of my mates. I didn’t do comedy again for six years, it scared the life out of me. When I was 24 I got cajoled into doing a stand up gig and then I started working in telly as a runner and different things. Then I met a guy called John Riche and I’d been dumped. He asked if I could cry on command. ‘No problem,’ I said. We did a video of me crying over and over again in different situations. We did a film about a guy who’s crying in situations where you wouldn’t usually cry. I learned out to act on camera and he learned how to direct. After that, I started doing sketch stuff again. Then we got a lucky break and did Big Babies for CBBC.

Who are your comedy influences?

I remember my mum cracking up laughing watching Russ Abbott and then the first comedy I got into would’ve been Vic and Bob. My stepdad had a Billy Connolly tape, and I nicked a Derek and Clive LP which I listened to a lot. I’d do Harry Enfield impressions at school and after that I just listened to everything. I had tapes of stand ups like Alexei Sayle and Ben Elton that I’d listen to over and over again. Then I got into great stand ups like Richard Pryor and Eddie Murphy. I still love French and Saunders. I would watch whatever comedy I could.

Did you set out to bring a bit of whimsy back to telly?

No, not intentionally. About five years ago I did a clown course. It switched everything in my mind about how you could get a laugh. The magic is in the audience’s head. The audience make an impression straight away based on how someone holds themselves. I wanted to play with what the audience thought of me when I walked on. It sounds daft but I saw a lot of people fail, and I failed for weeks, then I worked out how to make it work. How to get one laugh and another laugh with the clowning influence. People say what I do on stage is really weird but I think it’s really normal and quite mainstream. There’s not a plan as to what I want to put out there. Just ‘Will this make an audience laugh?’ That’s the only plan to it. If people ask me what bands I’m into, I usually prefer to say which songs I like because some bands do crap songs. It’s all about making good jokes. A lot of stuff grows organically. I’ve been hanging out with my son for weeks, he’s 5. Playing with him, I’ll end up getting fifteen minutes of stuff that has something of my son in it.

Five is a magical age for imagination.

He’s amazing, there’s no rules in his head. He said to me the other day, ‘Daddy, when I was 4 I used to think you were really funny but now I’m 5 I don’t think you’re funny.’ I was gutted. He said, ‘Sorry Dad,’ and cuddled me. After a couple of minutes, I was hurt, so I asked him ‘Why is that?’ He said, ‘Thing is, Daddy, all my friends that you make laugh, I’ve seen all that stuff before.’

‘Get some new material, Dad!’ So fickle, your audience! You haven’t turned your back on the stage, then? Do you prefer performing on stage or TV?

I like the variety. The thought of doing one forever would kill me. I like to jump from one to another. I jump from thing to thing, which is why I’m in this kind of job. Allowing myself to play, like a kid would. I try and keep as childlike as I can at age 42.

Do you never get ‘writer’s block’ then?

If something isn’t working, I’ll jump to another thing. I’m not being sidetracked, this is art. I like messing around at home. Once I’ve finished filming Mr Winner I’ll play around for a couple months and see if there’s anything worth showing an audience. You’ve got to be able to sell it, at the end of the day.

Yes, tell us about Mr Winner. Six full episodes have been commissioned?

Yes, we did the pilot, and we’re just about to start shooting that this month [September].

From the synopsis it sounds a bit like Frank Spencer [Some Mothers Do ‘Ave ‘Em] for the modern age?

There’s bit of him in there because there’s accidents but it’s down to the audience to decide if it’s like that or Mr Bean or like something else completely new. We’ve been trying to do something that is funny and feels new, hopefully.

So we can expect more laughs that come from everyday life and situations?

Yeah we’re drawing on the old silent movies, Buster Keaton and Laurel and Hardy, as well as real life as it is now. Dealing with jobs, relatives and everything else that people will connect with. Fingers crossed, I’ll try my hardest!

Comedy short The Mind Of Herbert Clunkerdunk, aired on BBC Two this week, you can catch it on BBC iPlayer here and you can follow Spencer @spendals on Twitter for latest updates.