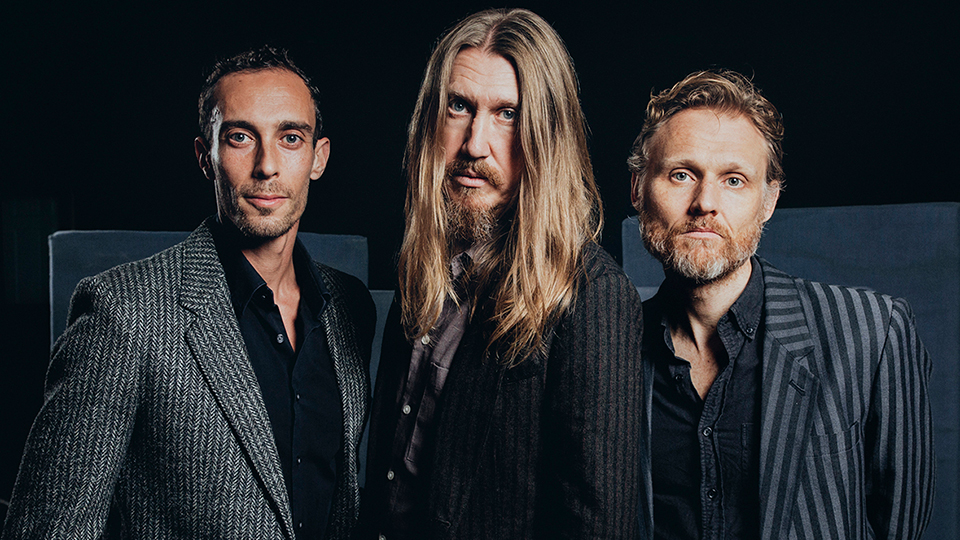 Brothers Oliver and Chris Wood grew up listening to American roots music, before embarking on separate careers in the industry. 15 years later, they reunited and – alongside multi-instrumentalist Jano Rix – began playing together as The Wood Brothers. Earlier this year they released their latest album, One Drop Of Truth, and have made a rare visit to the UK to support the record, including a stop at London’s Bush Hall last night.

The band opened their set with Postcards From Hell, from their 2008 album Loaded. It’s a driving, bluesy number with plenty of twang, which showed off the trio’s harmonies as well as the depth and gravel in frontman Oliver’s voice. The crowd responded with loud applause and cheers and this set the tone for the rest of the evening.

Throughout their set the band covered a variety of musical styles, including folk, blues, funk and classic rock. From the swampy Tried And Tempted to the stomping drums and honky-tonk piano of Keep Me Around and the soulful Sparkling Wine, they showed off their versatility to full effect as well as the range their six albums encompass.

One thing which particularly struck me about the show was the band’s incredible musicianship. Oliver and Chris frequently broke off to jam together, moving around on stage and throwing themselves into the performance. Particular highlights were Oliver’s fast-paced guitar-playing on Who The Devil, as well as Chris’ full-throttle, animated performance of This Is It. They also kept the audience’s energy up constantly, encouraging them to sing and clap along which they did with great gusto, particularly on The Luckiest Man and Loaded – the latter of which was the loudest I’ve ever heard an audience at Bush Hall!

I’ve already mentioned the group’s excellent harmonies, but their individual vocal performances were great too. Oliver threw in some impressive vocal tricks but also showed fantastic control, whether he was delivering smooth sustained notes on River Takes The Time or  the sharp, punchy syllables of Happiness Jones. Meanwhile, Chris got his moment to shine on the ballad Seasick Emotions, which was packed with vivid nautical imagery.

One of the standout moments for me saw the band crowding around a vintage microphone to perform The Muse. The simple, bittersweet song highlighted the drawl in Oliver’s voice and got the biggest cheer of the night when it finished. They then sang the upbeat, lively Liza Jane which seemed to have the whole audience joining in. I also loved the discordant Laughin’ Or Crying with its surreal imagery and the quirky, playful Shoofly Pie.

The band closed the main portion of their set with Wastin’ My Mind, from their 2013 record The Muse. It’s an upbeat song with funky verses and a bluesy chorus, and gave Oliver a chance to show off the power in his voice – holding one particular impressive long note – as well as a great guitar solo. The audience could be seen dancing along throughout and their enormous cheer at the end saw the band return for an encore. After thanking the audience, they performed the melodic Freight Train. Oliver filled the song’s lyrics with emotion and the delicate melody was a nice change of pace from the rest of the set. They then played Get Out My Life Woman, an uptempo tune with a driving rhythm and spiky chords, as well as a long outro which saw all three band members jam together.

Overall The Wood Brothers delivered an electric show that raised the roof at Bush Hall and showed why they’re one of the most interesting bands on the Americana scene today. The set covered a huge range of styles and influences, but was brought together through the trio’s excellent musicianship and Oliver’s passionate vocals. It’s safe to say they won over new fans as well as appealing to older ones, and on the strength of this it won’t be too long before they’re back in the UK soon.

In this article:The Wood Brothers