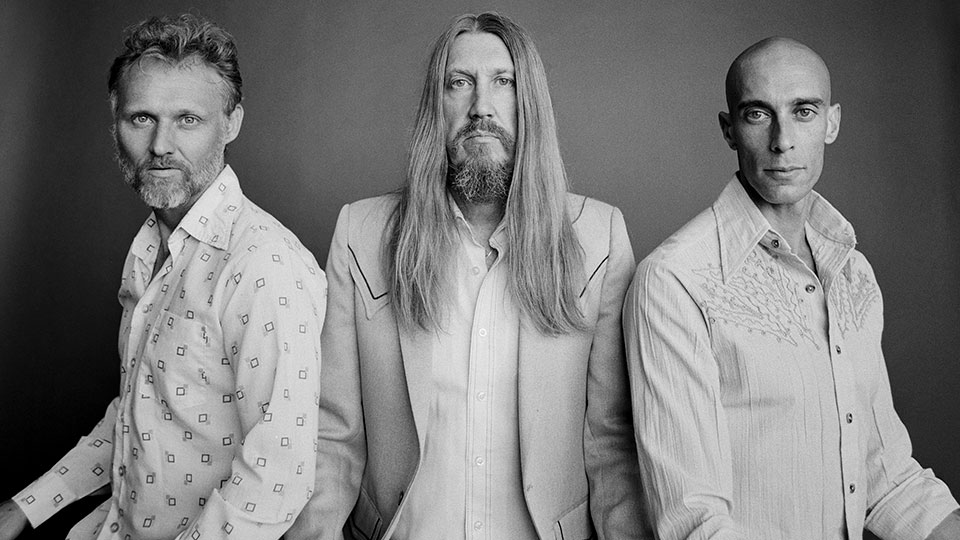 The Wood Brothers – made up of brothers Chris and Oliver Wood, and multi-instrumentalist Jano Rix – formed in 2004 and released their debut album Ways Not to Lose in 2006 via Blue Note Records. Since then they’ve recorded and released six more albums, their latest being One Drop of Truth in 2018. Less than two years on from that record, the trio is back with new 11-song collection Kingdom in My Mind. Rather than being a carefully planned record, the album came together following a series of improvised sessions held while they broke in their new Nashville recording studio.

Sonically The Wood Brothers cover a vast array of genres. Through their music you can hear influences from Country, Americana, Folk, Blues, Rock and Soul. The mixture of those genres can be heard from the opening song Alabaster, which sounds like it could have been released back in the 60s. A loose guitar riff backs Oliver’s gravelly rich vocal with harmonies coming in to bolster the feeling of the song. The band has said that they felt uninhibited in the studio while recording the album and that permeates from every single song.

The jaunty Little Bit Sweet, one of the more melodic moments on the record, is an early highlight. It shows that the band doesn’t need a whole lot to sound great. An electric guitar riff moves along at a fast speed allowing Oliver’s vocals to drive the song. When the harmonies come in on the chorus, the song takes flight and I have to say I was a little disappointed when further instrumentation was added following the first chorus. Still it’s not over-produced and a gentle beat gives the song a better chance of picking up some radio play.

The Wood Brothers really do explore all of their influences across Kingdom in My Mind. Jitterbug Love sounds a little bit like The Beatles doing Country, Don’t Think About My Death takes on a 70s rock sound, and The One I Love is a simpler folk-influenced song that turns into a big sing-a-long chorus. Beats clash and guitars scratch on the funky Little Blue with the band pulling their harmonies the tightest you hear on the record while Little Bit Broken is a soulful-rock jam that assures you it’s fine if you’re not completely together in life.

The album closes with a short reprise of Little Blue so the penultimate song is really the proper closer. Satisfied is an exploration of mortality and the afterlife set to a blues-influenced ballad melody. You can imagine the song translating well in a live setting and it’s without a doubt one of the standout moments on this record.

Kingdom in My Mind achieves exactly what The Wood Brothers set out to make – an album that’s not over-planned and over-produced. This definitely the loosest I’ve heard the band on record and it’s closer to their live shows than anything they’ve captured before. Having said that, it lacks a little cohesion in places but that’s unlikely to bother their fans. Kingdom in My Mind makes you want to go check the band out live, and that’s what it’s all about nowadays isn’t it?