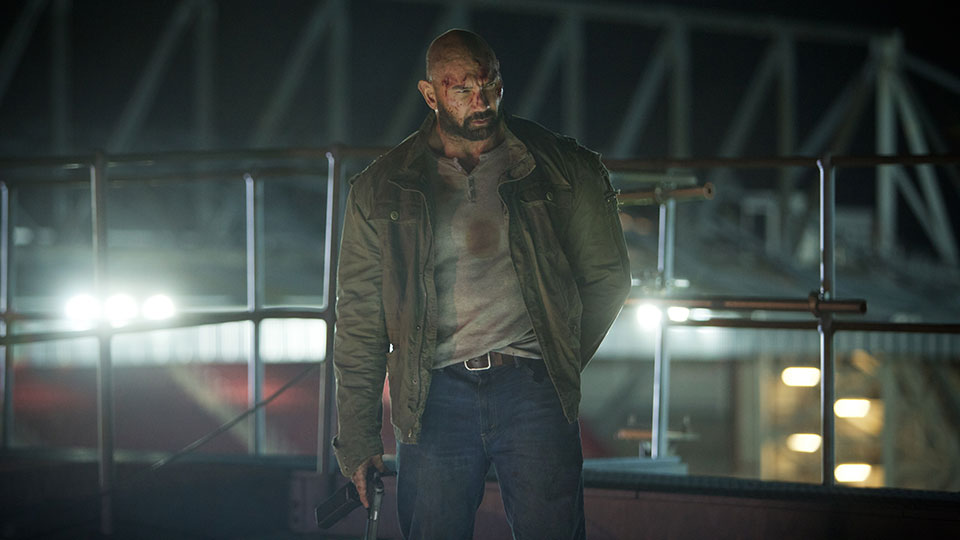 Former US soldier Michael Knox (Dave Bautista) takes a trip to London to visit Danni (Lara Peake) the daughter of a fellow soldier who was killed during duty. With two tickets to a West Ham game in his possession, Michael convinces Danni’s mum to let her have a night off from being grounded so he can treat her. Once they take their seats in the football stadium, Michael goes to get hot dogs and Danni disappears with some boys she knows. Michael realises that something shady is going on behind-the-scenes at the match and discovers that a group Russians have the stadium on lock down while they search for someone. They’re also planning to blow it up…

Final Score arrives today in cinemas and on Sky Cinema and it’s already being touted as ‘Die Hard in a football stadium’. That’s a pretty accurate description of this sometimes silly but never dull film from director Scott Mann (Heist). It’s fair to say that the premise for Final Score isn’t at all original but the twist of having it set in England works well. The story mostly follows the route you’ll expect but there are some nice moments in there to catch you off-guard such as the live execution of the commentators to show that the baddies mean business.

What will draw most people into this film is the action and it doesn’t disappoint on that front. There are some truly fantastic stunts and well-choreographed fight sequences. The pace is pretty relentless once the characters reach the stadium and that’s a plus point for the film. I’m pretty sure no one is watching this for serious character development or some profound hidden meaning.

When I interviewed Mann recently, he told me he’d originally envisaged a British lead but that Bautista convinced him to change the character to an American. It was a good decision! Bautista has been building quite a career in film since his breakthrough in Guardians of the Galaxy. He’s clearly got an eye on Dwayne ‘The Rock’ Johnson’s crown as King of the Box Office and his performance in this film suggests he could well dethrone him in the future. Bautista has an impressive physical build that makes him perfect for this kind of role. He’s good at delivering dead pan humour and he’s very believable during the tense action sequences.

Ray Stevenson makes a believable and intimidating villain but the same sadly can’t be said of Pierce Brosnan whose poor attempt at a Russian accent results in barely being able to understand a word he says. He’s not in all that much so it’s not too much of a strike against the film. Lara Peake is good as Dannii and her character gets to go through a little bit of a journey over the film’s run time.

Final Score is the absolute epitome of a popcorn movie. It’s never going to change the world, nor does it intend to, but it will keep you entertained. It reminded me of the action movies of the 80s where you could switch your brain off for a while and lose yourself in the fun. Mann’s direction is tight, the pace of the film is zippy and the script is fairly solid too. Final Score is definitely not perfect but it’s undeniably a whole lot of fun.