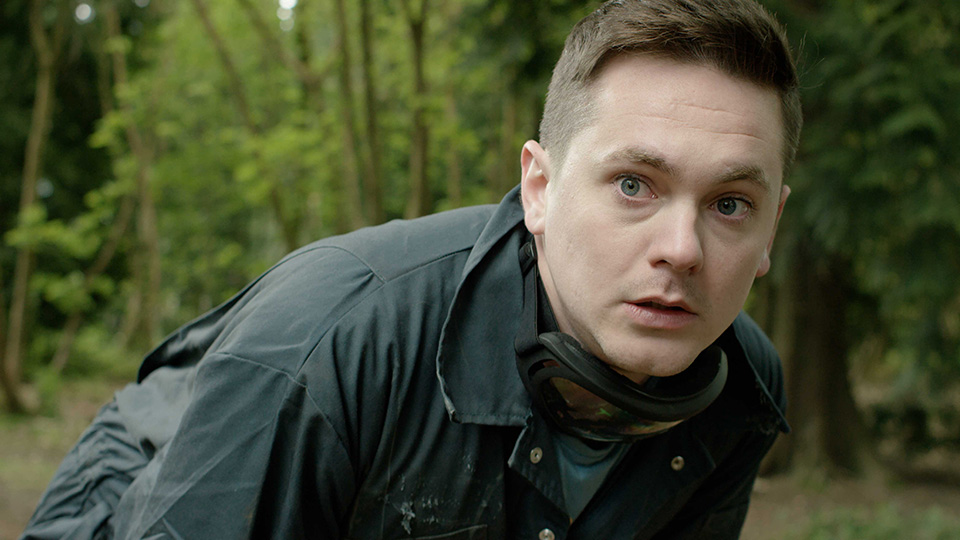 Sam (Sean Verey) discovers that his friends are taking him away for a mock zombie survival weekend for his stag do, to celebrate his last days as a free man. Accompanied by life-long friends Eric (Danny Kirrane), Toby (David Mumeni) and Myles (Timothy Renouf), along with his father-in-law to be Gerald (Mark Heap), who harbours a grudge against him, and a few other friends and acquaintances, Sam nervously goes along with the plans. When the 8 men are split into two separate groups, Sam and his group quickly get into trouble and the weekend takes a turn for the sinister.

If you crossed The Inbetweeners with Shaun of the Dead, F.U.B.A.R. is likely what you would get. Clearly drawing inspiration from the two British comedy greats, F.U.B.A.R. is a refreshing and original homegrown movie absolutely packed with laugh-out-loud moments, plenty of surprises and a stellar ensemble. Quickly establishing itself as an expletive-filled and blokey film, F.U.B.A.R. makes you fall in love with Sam and his friends before pushing them into a series of shocking situations.

Sam gets into a confrontation with one of the zombie performer Steve (Luing Andrews), who he’d seen prior to arriving at the location for the weekend, and their tussle winds up with Steve being impaled. Just when you think things can’t get worse the group’s loose cannon Eric, who seems to be confused between fiction and reality, does something the group may never come back from. As they try to cover their tracks, they leave more devastation in their wake, completely unaware of what they’re about to get embroiled in.

It’s hard to believe that F.U.B.A.R. is the work of a first-time feature film director. Ben Kent pulls off a flawless first film that is destined to become a British horror-comedy classic. He co-wrote the sharp script with Joel Wilenius and he utilises his ensemble to great effect. Kent shows an adept understanding of how comedy, horror and drama can complement each other, and he doesn’t waste a single second of the film’s 85-minute run-time.

The 8 actors that make up the main ensemble are superb. The supporting members – Perry Fitzpatrick as Cheese, Ewen McInTosh as Al and Jake Abbott as Brandon – provide fantastic support to the main 5 characters. Sean Verey is hysterical as Sam, the groom to be who tries to placate his friends and win over his soon-to-be father-in-law. Danny Kirrane delivers a very funny performance as survival enthusiast Eric while Timothy Renouf brings killer sarcasm and wit as wealthy Myles. David Mumeni is at his best when his character Toby is hysterical, and there’s one very, very funny scene that he completely steals when he throws a tantrum. Mark Heap, best-known for Space and Green Wing, manages to find another oddball character to inhabit and you can tell he had a real hoot being part of this movie.

I can’t enthuse enough about F.U.B.A.R. It’s an absolute breath of fresh air for both British film and the horror genre. I felt as excited and enthralled by it as I did watching Shaun of the Dead for the first time and I laughed as much as, if not more than, I did when I binge-watched The Inbetweeners. Ben Kent is a very gifted film-maker and F.U.B.A.R. is the first achievement in what promises to be a long-running and fruitful career. Without a doubt one of the highlights of Arrow Video FrightFest 2018.