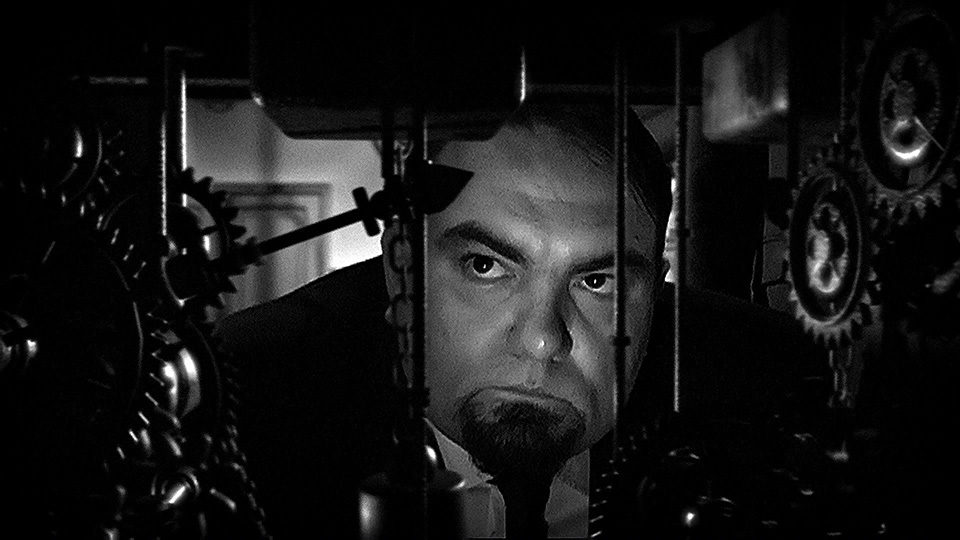 After successfully calculating how pieces a glass in free fall breaks into, a group of scientists captures the attention of a mysterious professor who invites them to his isolated mansions. The group believe the professor wants to know more about their studies but when they arrive he is nowhere to be seen. Instead they find a video recording and a model of the mansion, quickly realising they are pawns in the professor’s latest experiment.

The Laplace’s Demon is quite unlike anything I’ve seen before. Directed by Giordano Giulivi, the film features rear projections behind the actors meaning that the only real objects you see on the ‘sets’ are those that the actors interact with. Shot in black and white, the film harks back to classic thrillers and it looks absolutely magnificent. Giulivi and his crew really captured a specific look and feel that makes the film incredibly impressive.

The title of the film is taken from a theory that if someone knows the precise location and momentum of every atom in the universe, they can calculate the future by using the laws of classical mechanics. If that all sounds a bit high-brown, that’s because it is but that’s another thing I really loved about the film. The Laplace’s Demon doesn’t attempt to dumb down the theory it’s built around, which was interestingly added two years into filming (the film took seven years in total), instead choosing to let the audience use their brains. It’s refreshing and a very interesting meditation on the existence of free will.

At the heart of the film, The Laplace’s Demon is a mixture of Agatha Christie and The House on Haunted Hill. It’s an incredibly tense affair where most of the action happens off camera as the characters react to a model of the mansion they are trapped in. Inside the model are chess figures, with each of the eight characters depicted as pawns. Each pawn mirrors the exact movements of the character it’s linked to and things take a creepy turn when a Queen turns up out of nowhere. As the group tries to figure out what’s going on, the Queen starts to take people one-by-one.

The acting of the main cast is almost irrelevant. That isn’t to dismiss the actors, who are all actually very good, but there’s so much to take in that they barely register in the first half. Alessandro Zonfrilli is the standout as Roy and he has a look of a young Anthony Perkins about him. Each of the actors plays their role well and part of the fun is trying to figure out which one of the characters will disappear next.

I was amazed at how effective The Laplace’s Demon is. The combination of remarkable visuals and the intensity of the unfolding plot make for very exciting viewing. The film really is a triumph in film-making and it’s one of the more unusual films shown at this year’s Arrow Video FrightFest. It makes you think and it keeps you on the edge of your seat for the entire duration. If you, like me, enjoy engaging your grey matter while watching a film and like suspense, then The Laplace’s Demon comes highly recommended.

THE LAPLACE’S DEMON – Official Trailer 2018 from AstroLab Pictures® on Vimeo.